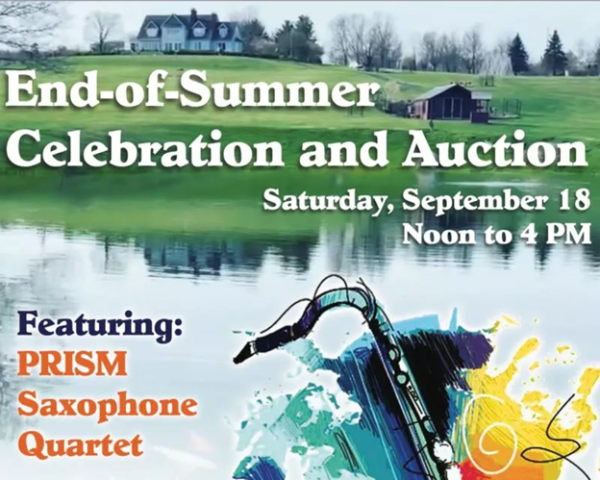 Please join Close Encounters With Music for an End-of-Summer Celebration and Auction. You will enjoy beautiful vistas, a scrumptious lunch, an appearance by the PRISM quartet (saxophones). and an auction of exciting items to bid on, including:

– Dinner for two at Cafe Boulud at Blantyre

– A consultation with a master gardener to design, improve, and plan your garden

– Performance for you and your guests by the Berkshire Jazz Collective

The event is to support Close Encounters With Music’s programs in 2021-2022, a season that features the Gold Medalist of the recent Van Cliburn Competition; first oboist of the New York Philharmonic; Cuban dancer Irene Rodriguez in a  Spanish and Latin American evening; a rescheduled world premiere of a newly commissioned piece; “Roaring Twenties: Paris, Berlin, New York” with vocalists William Ferguson and Blythe Gaissert; the a cappella vocalists Skylark; guitarist Eliot Fisk in “Folk and Baroque” as well as many returning favorite performers and beloved chamber music works.

PRISM Saxophones will perform in a tent.  Event address will be given upon purchase of tickets. Tickets are $80.00 and can be purchased HERE.

Intriguing programs of great beauty and breadth have distinguished the PRISM Quartet as one of America’s foremost chamber ensembles. “A bold ensemble that set the standard for contemporary-classical saxophone quartets” (The New York Times), PRISM has been presented by Carnegie Hall, the Chamber Music Society of Lincoln Center, and throughout Latin America, China, and Russia under the auspices of USIA and USArtists International. PRISM has also appeared as soloists with the Detroit Symphony and Cleveland Orchestra, and conducted residencies at the nation’s leading conservatories, including the Curtis Institute and the Oberlin Conservatory. Two-time recipients of the Chamber Music America/ASCAP Award for Adventurous Programming, PRISM has commissioned nearly 300 works by eminent composers, including Pulitzer Prize-winners Julia Wolfe, William Bolcom, Jennifer Higdon, Zhou Long, and Bernard Rands; MacArthur “Genius” Award recipients Tyshawn Sorey, Bright Sheng, and Miguel Zenón; and US Artists Fellow Susie Ibarra. PRISM’s discography is extensive, with releases on Albany, BMOP/Sound, ECM, innova, Koch, Naxos, New Dynamic, New Focus, Orange Mountain Music, and its own label, XAS Records. The Fifth Century, PRISM’s ECM recording with The Crossing, was awarded a 2018 Grammy for Best Choral Performance.

Close Encounters With Music offered a series of virtual programs starting last July to keep the music going throughout the pandemic. The decision was made to present the Berkshire High Peaks Festival virtually for the first time ever in Summer 2020, followed by an August live-streamed concert, “From Bach to Bachianas,” a guitar/cello recital featuring Eliot Fisk and Yehuda Hanani on stage in an empty Mahaiwe Theater. These and the October through April concerts that followed (“The French Connection,” A Night at the Opera,” Debussy and Brahms with the Escher Quartet, “Forever Bach – the Cello Suites,” Sebastians Baroque Ensemble) remain available for viewing on cewm.org, mahaiwe.org, and both organizations’ YouTube channels, and have collected thousands of views.

“We are hopeful that we can begin a gradual return to concert presentation as we know it on November 21—in person, and with a live audience at the Mahaiwe—with a rousing celebratory program postponed from June of 2020,” says Yehuda Hanani.  “This will feature our long-awaited world premiere of Tamar Muskal’s work for tabla, hip hop artist, two cellos and children’s chorus.  We look forward to welcoming everyone to the Great Reopening!”

ABOUT CLOSE ENCOUNTERS WITH MUSIC

Close Encounters With Music is in its 29th year of presenting music and other programming to audiences in the Berkshires and beyond. Entertaining, erudite and lively commentary from founder and Artistic Director Yehuda Hanani puts the composers and their times in perspective to enrich and enlighten the concert experience. Since the inception of its Commissioning Project in 2001, CEWM has worked with the most distinguished composers of our time — Joan Tower, Judith Zaimont, Lera Auerbach, Tamar Muskal, Thea Musgrave, Robert Beaser, Kenji Bunch, Osvaldo Golijov, John Musto, and Paul Schoenfield among others — to create important new works that have already taken their place in the chamber music canon and on CD. A core of brilliant performers who appear regularly with Close Encounters includes: pianists, Roman Rabinovich, Soyeon Kate Lee, Inna Faliks, Max Levinson and Michael Chertock; violinists, Shmuel Ashkenasi, Vadim Gluzman, Julian Rachlin, Peter Zazofsky, Itamar Zorman and Hagai Shaham; clarinetists Alexander Fiterstein and Charles Neidich; vocalists Dawn Upshaw, Jennifer Rivera, Danielle Talamantes and Kelley O’Connor; the Muir, Manhattan, Ariel, Vermeer, Escher, Avalon, Hugo Wolf, Dover string quartets; and the Los Angeles Guitar Quartet and guitarist Eliot Fisk. Choreographer David Parsons and actors Sam Waterston, Richard Chamberlain, Jane Alexander and Sigourney Weaver have also appeared as guests, weaving narration and dance into the fabric of the programs. Close Encounters With Music programs have been presented across the U.S. and Canada—Miami, Fort Lauderdale, Omaha, Cincinnati, Calgary, Detroit, at the Frick Collection and Merkin Hall in New York City, at The Clark in Williamstown, at Tanglewood and in Great Barrington, Mass., as well as the Scottsdale Center for the Performing Arts. Summer performances have taken place at the New York State Museum, Basilica Hudson, Orpheum Theatre in Tannersville, and in the orchard at Olana.  The Berkshire High Peaks Festival takes place each July at Berkshire School in Sheffield, Mass., as the educational initiative of Close Encounters With Music with fifty international students in residence for an immersive course of study and performance.