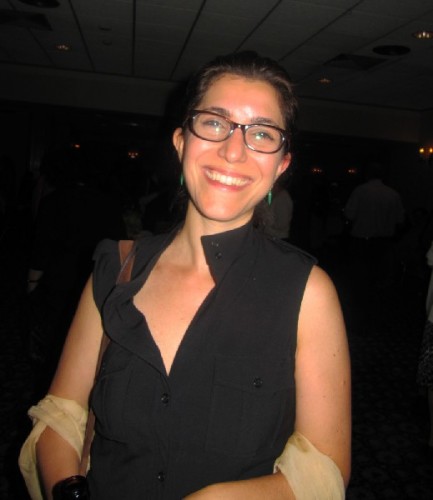 After the announcement to turn off cell phones and beepers, the house lights came down. Staring at the stage, a simulacrum of an empty stage, designed by Scott Pask, we scrutinized its emptiness. It was dominated by a spectacular spiral metal staircase seemingly with filigreed railing. There were niches with musical instruments forming a kind of curving back wall. We noted a tall stack of chairs. It evoked flashbacks to last summer’s controversial use of chairs in the set for Our Town.

The most prominent object on the “bare” stage was a grand piano.

We waited for something to happen.

Eventually a man whom the program identified as Johnny (Malcolm Gets) slowly made his way down the stairs. He walked about examining and absorbing the emptiness, a metaphor for his depressive mood, and then sat for ever so long in seeming despair. With varying degrees of agita, he would reinforce that ennui over the next, seemingly either fabulous or interminable eighty minutes, depending on your point of view.

Slowly he made his way to the piano and picked his way through the opening strains of the Richard Rodgers and Lorenz Hart standard “Blue Moon.” Notably the evening ended with a kind of encore, with some in the audience standing and cheering, and a reprieve of “Blue Moon.”

In between, we were presented with a staged concert, a DVD of some 40 timeless and treasured songs of Rodgers and Hart, as culled, collaged and appropriated into an ersatz “new musical” indeed an “American Premiere,” a first for WTF, by Tony Award winner John Doyle.

Doyle, what is he, collager, “playwright”, cut and paster of this jukebox musical is also credited as the director of this, at least for me, enervating travesty and insult to the tradition of the American musical.

The team of Rodgers and Hart over 24 years completed 28 musicals and wrote some 500  songs in The Great American Songbook. Each of the 32 presented here are stunning gems presented more as a series of zircons, however precious the setting, than diamonds, even in the rough.

As the melancholy Johnny sits alone on the stage, we thought of the saloon songs of Frank Sinatra or what jazz artists like Chet Baker and Miles Davis did with “My Funny Valentine.” At the outset of the evening, one was expectant regarding what might occur. Given the incredible material the range of possibilities and expectations was truly limitless.

Artistic director Jenny Gersten and Tony Winner Doyle have bristled at the widely circulated preopening speculations on Ten Cents a Dance as a “Jukebox Musical” for the venerable WTF.

In an interview with Jeffrey Borak in the Berkshire Eagle, Doyle said, in response to an unstated question “This is not a revue, nor is it a jukebox musical. I want the songs to be the inner narrative…about… this man and this woman. The only thing we sense for sure is that this is a relationship that’s been broken.”

In a press release, Artistic Director Jenny Gersten stated that "What John Doyle and the actors are creating is beyond a typical book musical. I think people are tempted to put this show into some kind of category like ‘revue’ or ‘song cycle,’ but because the actors are playing the instruments as part of the performance, it's giving an entire other nuance to the songs and a layer of narrative."

Jenny and John perhaps thou doth protest too much.

Or, as the stripper in Gypsy sings “You Gotta Have a Gimmick.”

In this case, the schtick is that the actors play instruments as well as sing. This is viewed as either brilliant innovation or a clever way to cut corners and save money. In an era of economic cutbacks this musical on the cheap, however “fresh” as the Eagle headline wants us to believe, is not what customers are paying full to price to see.

As the melancholy Johnny skulks about evoking “Blue Moon,” five women slowly make their way down the spiral staircase.

The trope postulates whether they are one former girlfriend “Miss Jones” or five chronological stages of her signifying the time frame of a failed relationship. The oldest is clearly Tony winner Donna McKechnie. The other four are so close in age that it is impossible to discern any obvious chronology.

Casting this show must have been particularly challenging. The five women all have superb voices, but they are required to also play a range of string instruments- bass, cello, violin, guitar- as well as sax, trombone, trumpet and percussion.

They sing and play while perambulating about the moody Johnny. For another bit of movement, a couple of times his piano rotated on a turnstile flush with the stage floor. Hey, why not elevate it for a bit more drama like the dinner table in the last WTF Main Stage production She Stoops to Conquer?

Clearly this dog and pony show needs all the help it can get.

The title of the production Ten Cents a Dance is also the title of a featured Rodgers and Hart song.

When a teenager in the 1950s, during an excursion to Times Square, I actually climbed the stairs to one of those venues. It kind of freaked me out as the “ladies” one might dance with were hardly like the girls I had a crush on at the time. They seemed so terribly old and even for a dime weren’t enticing to rub up against for a cheap thrill.

In that sense these girls were much too pretty. Even though they were tricked out in ghastly, almost identical floral dresses (Ann Hould-Ward), and garish curly wigs (Paul Huntley). The era they evoked was that of my Times Square excursion.

Back then, they were floozies but today, of course, they would be lap dancers and a lot more expensive.

In a musical, the norm is to expect a great pit band and spectacular dance numbers. Here the women gamely, with varying degrees of success, underwhelmingly played those instruments. And dance? Excuse me, movement, was provided by the “consultant” Dontee Kiehn.

The most absurd invention of the production was putting a wheel on the bottom of the bass. So the large instrument joined the perambulating conga line. The more portable cello was picked up and plunked down here and there.

McKechnie, clearly cast for her singing and marquee attraction, had the least ability to play an instrument. She was confined to clanging at a triangle, or splashing at cocktail drums with brushes. At one point, she bravely offered a honk on the trombone. The audience burst into applause for her effort. In another number, she managed a kind of one note down stroke on violin.

With all those great songs, just imagine what some actual musicians might have done.

This never became more evident than during the failed attempt to evoke some emotion from “My Funny Valentine.” The actress stabbed at it, overplaying and milking it, while taking a break from her violin. In one of the rare moments of interaction between the split personalities, personas of Miss Jones, McKechnie approached from behind and seemingly consoled her joining in on the song.

Now and then as “drama” to extend "the plot,” Johnny would get up from the piano to sing and skulk about. Astrid noted that she could still hear the piano which he was not playing. Hmm.

Getting ever deeper into a simulated funk, he discarded items of clothing. Eventually he took off his shirt to sit at the piano in an undershirt. It was meant to covey a kind of emotional down and dirty mood. It was something Vegas crooners like Sinatra, Martin, Darin and Davis did. They would start a set in full tux and then yank off coat and tie letting the audience feel that they were really getting into the music.

Here there was more of a sense of Malcolm Gets performing in his undershirt.

What about the instruments? Were the women actually playing them? I looked carefully to determine what was going on. Was the sound coming from the direction of the instrument? And, if there were off stage musicians, like the pianist, who was most likely Musical Director and Orchestrator, Mary-Mitchell Campbell, why not put them on stage?

This production desperately needs real musicians. Not talented female singers who at some point in their lives and careers took music lessons.

That issue was never more evident than when the five women all played saxophone. The resultant sound evoked, at best, three weeks of frantic rehearsals. The women should sue Actors Equity for extra pay. They were hired for one job and had to perform two.

It was indeed a great evening of American song. What’s not to like about “Manhattan” “Blue Moon” “My Funny Valentine” “Ten Cents a Dance” “Isn’t It Romantic” “Falling in Love Again” “The Lady is a Tramp” and so many more.

Well, a lot actually. Mostly there just wasn’t any oooooommmmmmph.

Those great songs were all yanked out of context. They were retrofitted to this thin little story about a guy and a dame. Exploring the themes of loss, pathos, and bathos it ran the emotional gamut from A to B.

Why not give us a revival of any of those Rodgers and Hart classics: A Connecticut Yankee, The Girl Friend, Simple Simon, On Your Toes, Babes in Arms, The Boys from Syracuse, Pal Joey?

Perhaps the answer is that those musicals are dated. But culled from rarely produced shows are dozens of enduring classics. Audiences lack the patience to sit through an old show for one or two of those hits. So why not cut and paste them into a fabulous “new” musical.

Based on the applause and enthusiasm including those all too frequent standing Os and Bravos, most folks went home thoroughly pleased and entertained. Truth is audiences love jukebox musicals. They are quick, cheap, easy to produce and great at the box office.

That’s the enduring magic of fool proof Rodgers and Hart.

All that great music with a gimmick.