Gory and Beautiful, the Opera Succeeds Bartok and Berg 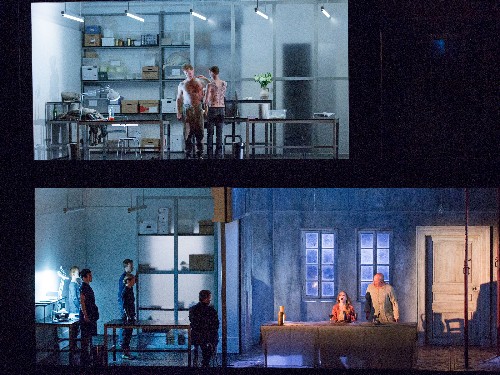 Active angels and a tortured couple on the set of George Benjamin's Written on Skin. 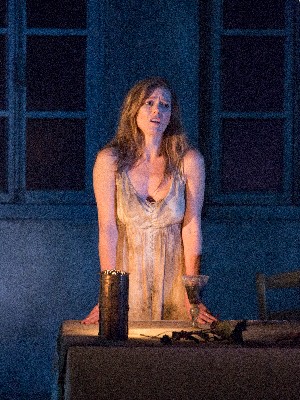 Barbara Hannigan's soprano has unusual range and perfectly lovely tone. She is the go-to girl for contemporary composers. Benjamin, in the age-old tradition of opera composers, wrote this role for her. 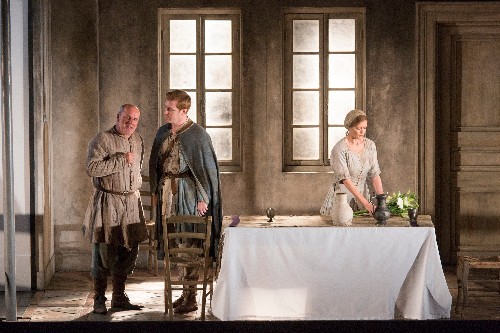 A traveling illuminist arrives in a medieval home to draw on skin and release the passion of wife. 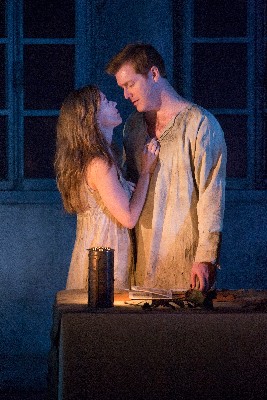 Barbara Hannigan and Tim Mead, 'till death do them part. In Written on Skin they both tell their story and act it, like Brecht, but not distanced. 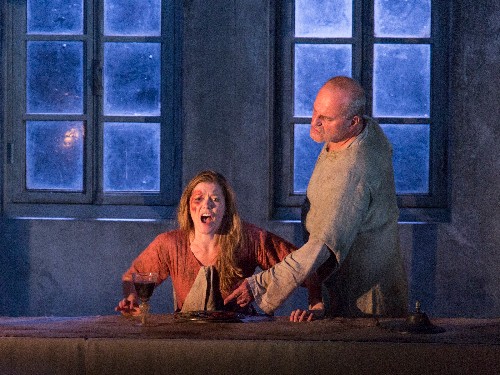 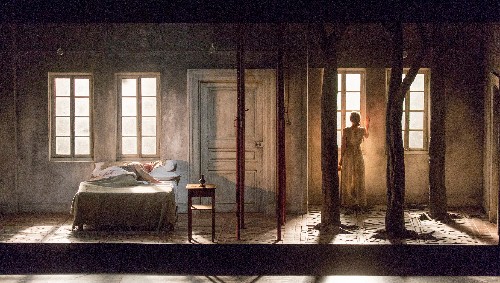 The set by Vicki Mortimer and lighting by Jon Clark intrigue and mesmerize.

The skin of the title is a calf's.  Vellum was used until the 17th century to write and draw pages of books. George Benjamin, the leading contemporary English composer, found his librettist, Martin Crimp,  whose daughter found an old troubador tale set in Provence.  The one demand made by the commissioning Aix-en-Provence was that the opera be set there.

It is difficult during the spinning of a grisly tale of passion to sit back and listen.  Yet the sheer beauty of the music Benjamin has written for this opera, and the sounds of the words written by Martin Crimp, sweep us into the odd re-telling of a 12th century tale.  Consonants would softly introduce a word, the voices swelling and then opening as they fixed on vowels.

Women have always been killed for less than a romance with a husband's employee.  But Agnes the wife could have had her affair and gotten away with it.

Instead she chooses to tease her husband, The Protector, and to insist that he acknowledge that she is no longer a girl.  Sex has made a woman of her.

The Protector (husband), a fine example of polymorphous perversion, doesn't want to know about her dalliance.  Her lover tries to protect her by blaming her sister.  In the finale, like Carmen, Agnes dares to display her passion to the same end, in Agnes' case, self-inflicted.  It is like Tosca's plunge.

The Protector is cut from the same cloth as Bartok's Bluebeard, Lulu's Jack the Ripper, and Hannibal Lecter.  Unwittingly this wife has to hang up because her lover is coming for dinner.  Her lover's heart, that is.

Benjamin, whose characters are rooted in opera tradition, is aware of the impact of movies on our culture.  Their omni-presence changes the role of opera. In Written on Skin he addresses cinematic technique by incorporating it and taking on the challenges of movie narrative by trying something different.

Soprano Barbara Hannigan, who tops everyone's want list in contemporary music, is the leading lady, and a marvel. She notes that the director Katie Mitchell suggested that the singing actors imagine themselves re-enacting a story they have already lived through. A cinematic double take emerges: the actors are both themselves, and themselves telling their story.

Both the compelling performances of Christopher Purves as the perverted husband and the joyous countertenor Tim Mead as the illuminating illustrator and lover, bring us closer to the characters instead of distancing us from them as Brecht would have done.

Part of the reason this complicated approach works is that very simple, lovely lines underscore the sung text.  Rich, dramatic orchestration takes place most often when the story is proceeding without song.

The stage setting is both past and present.  Stage right is a two-storied work area for angels and the boy who will write on skin.  At stage center is another area which includes a bedroom/dining room changeable room and an exterior, as a tree shelters the house. Eventually, a staircase to hell is revealed stage left.  The set is often lit to suggest illumination.  Split second changes in exterior and interior lighting divide scenes.  Sharper divisions are indicated by a instant drop of a black curtain.

Sixty percent of the cast at Lincoln Center was on stage for the world premier in Aix.  Their comfort level with the roles and the staging was evident as all of the production elements mixed.  The Mahler Chamber Orchestra, conducted first by composer Benjamin in Aix, are in the pit. They produce what Benjamin calls "a golden tone."  Alan Gilbert's strengths both in opera and contemporary music were on abundant display.

The audience was packed with the mix of young and old that opera producers covet.  In the US, the excitement of contemporary opera is felt in Santa Fe, St. Louis, San Francisco and now Lincoln Center.  Benjamin's Into the Little Hill will be presented on August 16th at 5pm.