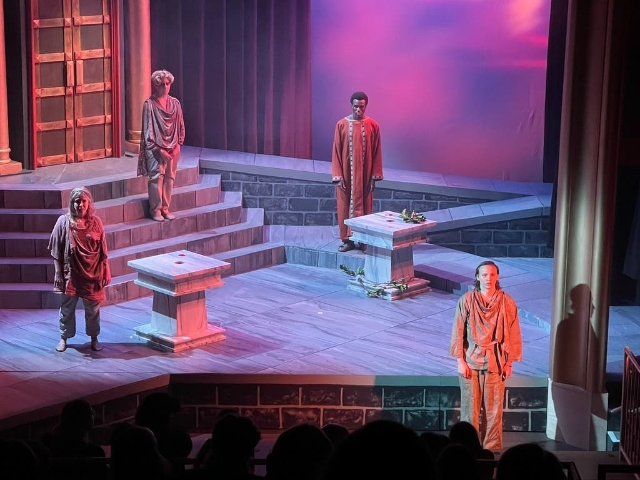 Have you ever seen a Greek tragedy?  Most of us haven’t. We may have read one in high school or college, or perhaps we learned something about Aristotle’s definitions of tragedy, tragic hero, fatal flaw and catharsis.

But to actually see a production is rare.

Legacy Theatre in Stony Creek, Branford is helping to rectify that with a production of Oedipus Rex through Sunday, Aug. 22.

It’s a bold choice for a fledgling theater. Some might be put off by the plot and others might be intimidated by both the seriousness of the work and the idea of a “Greek tragedy.”

This is a production worth seeing, if only for the ability to get a better understanding of the development of theater. After all, the seeds of our modern theater grew from the Greeks.

Sophocles wrote many plays but his Theban trilogy (Oedipus Rex, Antigone and Oedipus at Colonus) are among the few that survive.

In case your memory of this work is sketchy, Oedipus tries to prevent a prophecy from the gods from coming true. The prophecy was that he would murder his father and marry his mother. As a young man, he abandons his parents (the King and Queen of Corinth) and takes off. Little does he know that one cannot outsmart the gods. On the road he meets an elderly man, slays him and then finds his way to Thebes which has been under a terrible curse. He solves the mystery of the sphinx which saves the city and is crowned king, the throne was vacant since the previous king was murdered by a gang of thieves while out of the city. He quickly marries the widowed queen.

Years later, the city is again suffering from a myriad of terrible problems and Oedipus sends his brother-in-law to Delphi to consult the oracle about what to do. The answer is that the problems won’t be solved until the murderers of the old king are cast out of the city.

Perhaps by now, your memories from school have kicked in and you can see where this is going.

This production features a translation by Ian Johnston, who has translated many Greek works. I have read better translations, this one lacks poetry. At times the wording is jarring, too informal for such a work.

Two standouts in the cast are the two Equity members: Mariah Sage as Jocasta, the Queen and Tom Schwans as Creon, her brother.  Each brings authority to these characters; Sage as Jocasta shows her growing concern and awareness through her expressions and posture; you know what she is realizing without her saying anything. Schwans’ role is less pivotal but his authority and bearing comes through.

Obviously, Oedipus must be significantly younger that Jocasta; he left his family at young age and soon after arrived in Thebes. But he is not that young; he has been king for many years and his children are nearing adulthood and able to take care of themselves, as he tells Creon at the end.

Oedipus is also a man certain of his intelligence and rationality. Unfortunately Mitchel Kawash, who was excellent in Barefoot in the Park, doesn’t project the charisma or the authority of the king. Too often, he comes across as a petulant adolescent annoyed that he is not getting his own way.

That may be the fault of director Kelly Baisden Knudsen or the performer, but it diminishes the central role and thus the center of the piece.

I was puzzled by another directorial decisions. At various points throughout the production, cast members pull out red ribbons with writing on them. The problem is that the gold lettering cannot be read by the audience (and I was sitting very close to the stage), and only a few are projected. Those that were echo lines in the play or make a comment about them. It is an interesting idea that did not work as perhaps it was intended. It puzzled more than enlightened.

The traditional chorus was led by Emmett Cassidy and Jessica Breda, both very good. It minimized the unison reciting of speeches which was useful in making the lines clear.

I recommend seeing Oedipus despite my hesitations about this production.

Any theater lover should see a Greek tragedy performed live at some point. Here’s your opportunity.