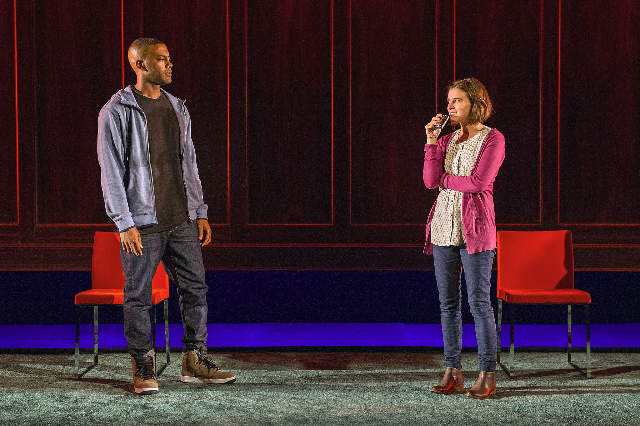 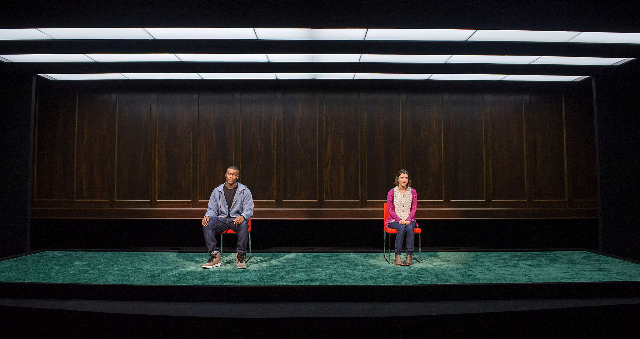 There is riveting severity in the two-hander Actually by Anna Ziegler, directed by Lileana Blain-Cruz.

He is tall, handsome, and black. She is small, fragile, insecure and Jewish.

It seems that he is so above her pay grade that she jokes about the blog site dedicated to him as a campus wide sex symbol. She is awed, smitten, nervous and thrilled.

With some swagger he tells her to stop talking long enough to let him kiss her. With dramatic gestures she conveys to us complex layers of surprise, apprehension, unease and then submission.

We learn that she has neglected reading assignments to indulge in nightly bouts of binge drinking. In Psych 101 she has studied the dynamics of mating, the rejection and attraction cycles of how and why seeming opposites attract. What is happening to her does not equate to common sense. As a very bright young woman she is applying critical analysis but it doesn’t quite equate.

During the one act play we come to know ever deeper layers of their humanity as well as what went terribly wrong in the act of what may or may not have been consensual sex.

Given that she was sick drunk at the time, with the assumption that he is a good guy, neither can recall whether she said no. The legal definition of what she blurts out as “rape” hinges on her pulling away and his allegedly grabbing her back.

In the clear light of day, as she vomits on the floor of his dorm room, Tom notes the condom wrapper on the floor. It is evidence that he was conscious of the act and responsibility to take precautions.

The compelling and austere drama, brilliantly performed by both actors, devolves into the familiar dichotomy of  he said, she said. Whose side you are on may depend on your gender.

Is it possible that they are both right and wrong?

How then to decide? The playwright introduces the notion of the feather of truth. It floats down as the play concludes. This idea goes back to the Egyptian Book of the Dead. Anubis the jackal, lord of the underworld, weighs the soul of the dead against an ostrich feather. It is the symbol of Maat, the goddess of truth and justice.

It was a tough evening of theatre and the design of Adam Rigg and lighting by Ben Stanton were so austere and severe that it has us squirming in our seats.

There are generic, orange chairs set in front of a dark, wood paneled wall. It provides the ambiance of a dean’s office or conference room where the case is being reviewed by a faculty discipline panel. It is made known to us that it is not a legal hearing and there are no defense or prosecution representatives. The students are to give accounts of events and the panel will then take appropriate actions.

For most of what is revealed the director Lileana Blain-Cruz, focuses on the sharp and shifting dialogue. They mostly remain seated talking to each other. Then, with a harsh lighting shift, they face forward and speak to us or rather the review panel.

We learn the back story of how they came to be admitted to Princeton. She implies that he got admitted through affirmative action. He resents the racial stereotyping stating that he aced the SAT’s and is a promising music major. Not rap or hip hop but Mozart.

Initially, she proposed a game of three statements. Two would be truthful and one not. One of her’s is that she is not an athlete. That’s more or less false. The advantage to her good but not great application was that she plays squash. The school needs to recruit a team. As she states even a marginal player can make the team.

While she runs off at the mouth in a nervous and neurotic blur he speaks with poise, gravitas and compelling conviction. In addition to being handsome, charming and charismatic he is young, gifted and black. He deserves to be at an Ivy League school. All the more remarkably as the son of a single mother who has just been diagnosed with cancer.

The performance by Joshua Boone is commendable but miscast as an 18-year-old college freshman. He is far too poised and sophisticated for the role. Socha, by contrast, seems less age specific and more generically gawky, needy and nerdy.

From a distance he is level headed and morally compelling. The horror of American history weights the scales in his favor. In self defense he counter punches about her sense of privilege and entitlement.

Focusing on her physical and emotional insecurity she strikes back “You’ve always felt good about how you look. You get to be comfortable in your own body. And that’s a privilege.”

The play will move on to Geffen Playhouse in Los Angeles. It is produced in association with Manhattan Theatre Club.

The subject matter of the drama is compelling, poignant and timely.

In this play Amber is immature and sexually inexperienced in contrast to Tom. The norm is for binge drinking college freshman to experience several years of “hooking up.” Starting with puberty, in most cases, being in love is not a part of the equation. It is more about gratification on both sides.

For the current generation of college students both sexes may be regarded as equal opportunity predators. In loco parentis the institutional emphasis is on disease and pregnancy prevention. The current culture has desensitized love making. The very terminology seems superannuated compared to the new normal of hooking up.

Under those ground rules this absorbing drama asks up to participate with open minds in what is revealed as an impossible judgement call. That floating feather at the end of the play asks of us in our hearts and minds to decide onto which side of the scale it fell.

On campuses all over America lives are in the balance.