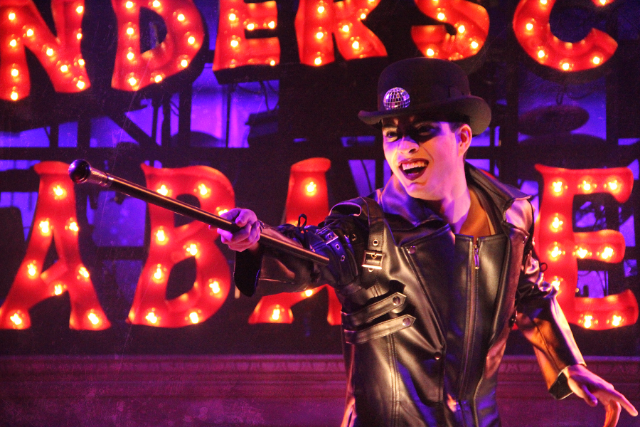 Photo by Giancarlo Rodaz The Master of Ceremonies (Giorgio Volpe) has fun with the audience. 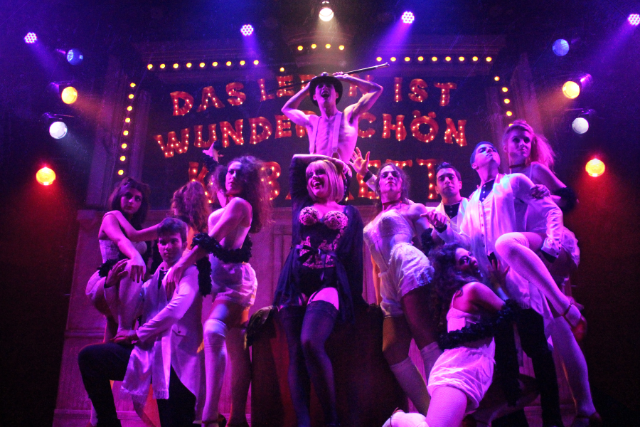 Photo by Giancarlo Rodaz The MC (Giorgio Volpe, top) is in his element in the Kit Kat Klub with his "Girls" and others surrounding him. 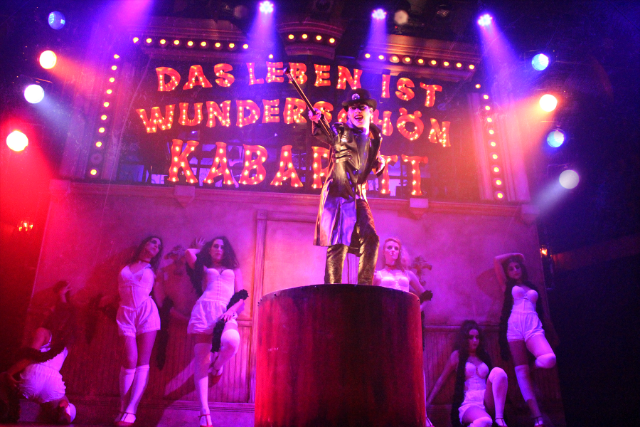 Photo by Giancarlo Rodaz The MC (Giorgio Volpe) is the main attraction in this scene from Area Stage Company's vibrant production of Cabaret. 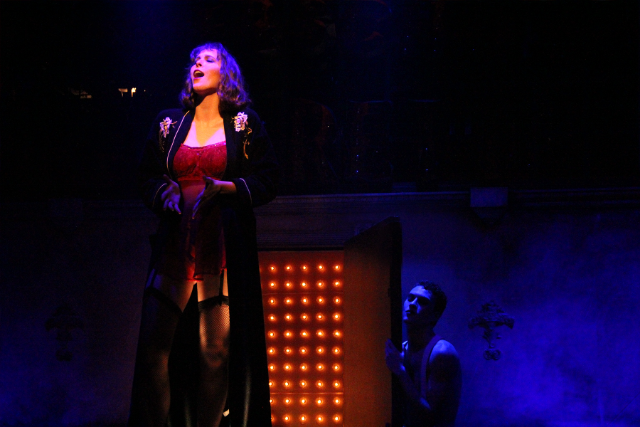 Without warning, a group of Nazi flag-waving activists march down the aisle of the audience seating area, fervently singing the anthem “Tomorrow Belongs to Me.”

Surely, they’ll startle you in Area Stage Company’s stunning, vivid, and arresting production of the cautionary concept musical classic, Cabaret. It’s running through Aug. 26 in an ambitious mounting of which ASC’s entire team should be proud.

Director John Rodaz and Co. are staging the bold and often dark, unsettling 1998 Broadway revival version. While the script remains the same, Rodaz has come up with a fresh interpretation. It’s one that mirrors our troubled times.

Indeed, in this production, the sight of the marchers must bring to mind last year’s violent white-supremacist rally and a counter-rally in Virginia. Consider, too, that this production opened on Friday. Meanwhile, Sunday marked the one-year anniversary of those rallies.

And if you need more arguments as to why Cabaret is so timely now, here’s one: The call to vote in this year’s election reverberates with an emphasis as strident as the foot stomping in ASC’s production. The stomping is part of Rebecca Ashton’s vibrant, acrobatic and eclectic choreography. It reinforces Cabaret’s fourth-wall-shattering, Brechtian style.

Unquestionably, Cabaret’s creators have never allowed audiences to sit back and hide behind the illusion of the “Fourth Wall.” Instead, composer John Kander, lyricist Fred Ebb and librettist Joe Masteroff have forced us into the decadent, seedy Kit Kat Klub. The establishment serves as a metaphor for the increasingly immoral, changing world of 1930s Berlin, as the Nazis rise to power.

Likewise, Rodaz plunges us further into the depths of this world. The wide, expansive, multi-level set plays a big role in communicating Rodaz’ directorial approach.

For instance, the Kit Kat Klub, or at least part of it, always remains on-stage. This is true even during scenes set outside the nightclub. Dressing rooms remain on both edges of the stage and extend almost into the audience. These rooms are immediately adjacent to scenes set in other locales.

Outside those dressing rooms, Kit Kat Klub “Girls” often watch action unfold outside its walls. With this in mind, at least part of the production’s message seems clear: The “Klub’s” regulars can clearly see the outside world and signs of danger. Yet, they choose to ignore those warnings.

Again, like Cabaret’s creators, Rodaz, in ways both subtle and more overt, includes us in the action. For example, the set not only extends almost into the audience, but dressing rooms are angled toward us. Perhaps, we’re receiving a message: Just as the nightclub’s workers and others are ignoring signs of impending danger, we’ve also been guilty of not paying heed to such signs. Instead, we might hide in our own "Kit Kat Klub," where we don't have to think about, hear about or see warnings that evil is on its way.

Unfortunately, evil targets doomed lovers Fraulein Schneider, a non-Jewish landlady, and Herr Schultz, a Jewish fruit seller. In this production, evil whizzes past them. Specifically, someone rushes through their shop, makes a discomfiting noise and cause damage. Unlike in other productions, Rodaz has chosen to make this sign of coming danger visible. We may choose to ignore it, but it’s right there, in front of our eyes.

Overall, David Kwiat succeeds as Schultz, endowing him with enthusiasm and wide eyes. He speaks with a Yiddish inflection and is always charming. However, Kwiat has little to no semblance of a German accent.

In contrast to Kwiat and others, a marvelous Isbelia Duran as Schneider makes you think she’s really German. Duran shines in the part in a well-rounded performance. She nails her character’s easy-going pragmatism, affability, no-nonsense demeanor, strong will, zest and vulnerability.

This actor, like her castmates, possesses strong, expressive and rangy singing voices. A several-piece, live, versatile orchestra robustly accompanies them, guided by music director Katie Duerr. The musicians prove adept at playing the eclectic, iconic score. The drumbeat that starts the show is as menacing as ever, and emphasis from the instruments help reinforce emotion, mood and danger.

While the singing is strong, we must single out Marilyn Caserta, who plays unpredictable cabaret performer Sally Bowles. Her rendition of the title song is superb. She understands what this song is about. Bowles and American writer Clifford Bradshaw have just had a fight. The former now realizes that bad times are coming. Still, she doesn’t want to face them, instead wishing to hide.

As she sings the show-stopping song, Caserta looks teary-eyed. Nevertheless, she forces a smile while beckoning us to “come to the cabaret.” As the song progresses, her self-confidence grows. Clear defiance creeps into Caserta’s voice as she proclaims, “I Love a Cabaret.”

By contrast, at the show’s beginning, Sally seems as happy and cherry as Legally Blonde’s Elle Woods. She doesn’t hint that there’s a darker side to this British expatriate. But toward the end, she vividly reveals that side.

Transitioning from one emotion to another seems to be one of this cast’s strengths. For one, Ryan Bauta as Bradshaw excels at it. He starts out fresh-faced, naïve and open minded, before switching over to believable frustration and other traits.

To his credit, the ASC production’s Giorgio Volpe doesn’t try to mimic either performer. Volpe’s performance comes closest to that of Cumming’s, but he makes the portrayal his own. There’s a forcefulness and swagger to his Emcee, without either trait feeling forced. Also, Volpe conveys an unapologetic naughtiness, flamboyance, playfulness and an ability to comfortably and humorously interact with the audience. Volpe is also versatile. He can be upbeat and shameless. At other times, the actor is deftly subdued, yet expressive. He’s also quite nimble and acrobatic. There’s a platform onto which he stands, allowing Rodaz to highlight him.

Meanwhile, “The Girls” as the emcee calls them, are integral to this strange individual’s shenanigans. In ASC’s mounting, they’re sexy and naughty, similar to the prostitute Fraulein Kost (played with an impulsive, vulgar demeanor by musical director Duerr.)

Speaking of vulgarity, the seemingly nice German turned hardened Nazi Ernst Ludwig isn’t the most polite fellow. Michael Leyte-Vidal plays him a bit awkwardly. On the other hand, Leyte-Vidal instills believable menace in Ludwig and it’s easy to root against him by the end.

On the contrary, it’s hard to find fault with this cast and crew, which includes Maria Banda-Rodaz’s character-defining costumes and Giancarlo Rodaz’ mood-enhancing lighting as well as vivid sound effects.

But if you want to quibble, you could point out that when Sally reveals she’s pregnant, Clifford’s response comes too quickly and mildly. We’d expect, perhaps, a moment of stunned silence.

Nitpicking aside, ASC has scored a huge triumph with a huge undertaking.