Detroit Is Open for Business 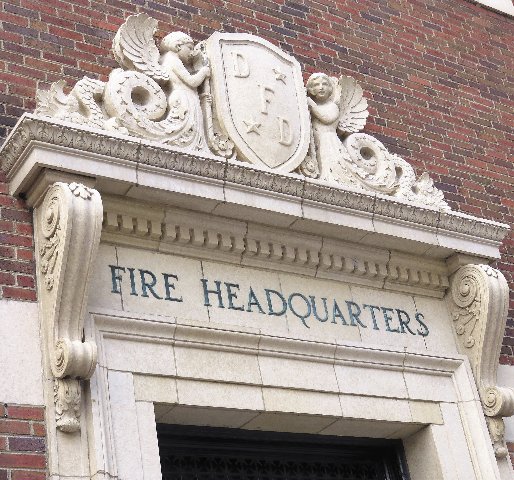 Exterior sign from bygone days at The Foundation. All photos by Anne Siegel 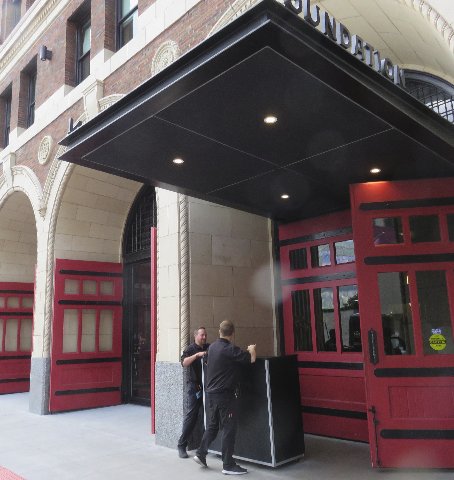 Bright red doors once opened for horse-drawn fire wagons at the Foundation Hotel. 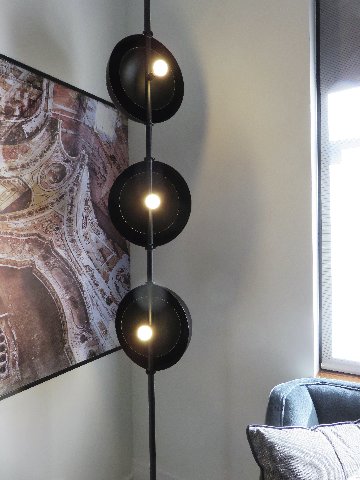 This lighting fixture is a subtle reference to The Foundation's origins. 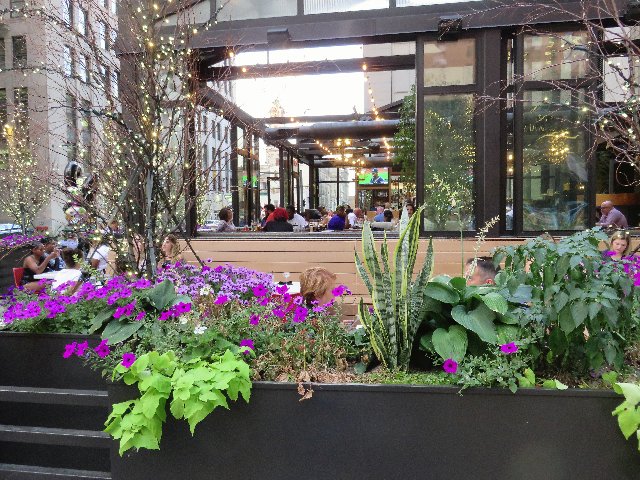 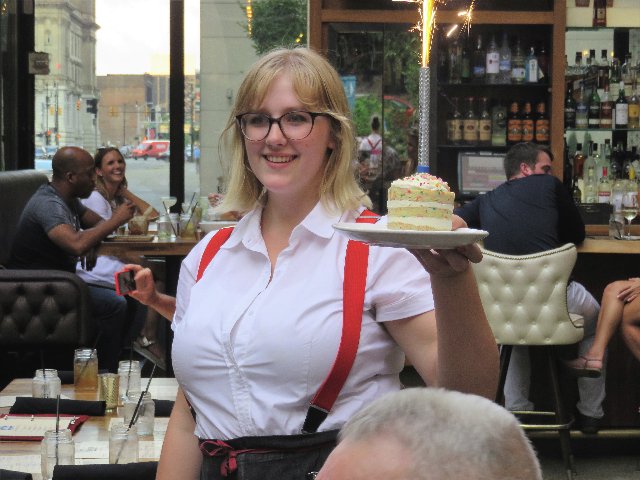 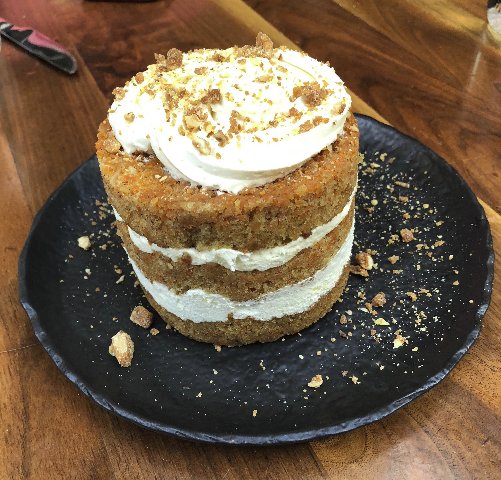 Memo to the business traveler: Don’t be surprised if – someday soon - your boss sends you to Detroit. Known as “The D,” “Motor City, and a host of other nicknames, Detroit is rebounding big time from its bankruptcy a half-decade ago. The business climate has picked up considerably, especially in the past year.

Consider Detroit’s Cobo Center, a centerpiece of the city’s downtown.  With 225,000 square feet, Cobo is the 17th largest convention center in the country. Thanks to a $279 million upgrade, it alone drew 1.4 million visitors last year, a sizable percentage of Detroit’s annual 19 million visitors.

Some background is in order: The Cobo Center is run by the Detroit Regional Convention Facility Authority (DRCFA), which was created shortly before the city declared bankruptcy in 2009. It represents a partnership between the city, the state of Michigan, and three of the state’s counties.

The Cobo Center’s best-known event is the North American Auto Show, where dealers reveal their new models. In 2020, the show is being shifted to a new slot in June (it formerly was held in weather-challenged January).

The Cobo Center’s riverfront location, as well as the area’s revived business climate, has attracted several new hotels in the past year. More hotels are scheduled to go online later this year.

To be sure, one can still find the standard hotel chains near Cobo, represented by Marriott, Hilton, Wyndym, etc. But there are livelier and quirkier choices now. One of them is the The Foundation, located a stone’s throw from the Cobo Center.

This 100-room, boutique-sized hotel offers a deluxe environment that’s been refurbished from the 1929 fire department it once was. The Foundation has been open for more than a year. At first glance of the hotel’s exterior, the hotel’s name is easily overlooked by a larger, etched-in-granite sign that says, “fire headquarters.” Welcoming guests is something this hotel does well, from the moment one walks towards large red exterior doors.  (Don’t worry – a bellman is always ready to open the heavy wood doors for guests.)

Inside, the décor is industrial chic. The registration desk is just a bit larger than a restaurant hostess stand. The desk is easily overlooked, as one is drawn to the adjacent restaurant, the Apparatus Room. This eatery offers three meals a day (be sure to set up a dinner reservation when you arrive, if not beforehand).

Although my July visit to the Apparatus Room included a “chef’s choice” dinner of off-menu items, the menu gives hints of what the chef favors. (Please note that this menu is seasonal.) To start off, there’s beef tartare, served with caper and golden raisin espuma (froth), and chili thread ($16); and, farro risotto (farro is a type of Italian grain). The creamy dish ($18) is combined with summer squash, shishito peppers and peas. The 36-hour braised veal ($36) rewards the diner with a light, beef flavor filet with a velvety texture. It comes with summer vegetables, wild mushroom duxelle (a minced mushroom combination that is thickened by sautéing) and blanquette (a creamy white sauce). For a less filling side dish, there’s crispy brussels sprouts, ($9), which are indeed crunchy on the outside and flavorful throughout.

It must be noted that the restaurant leans towards trendy tableware: black-colored tableware.

The bar area really heats up in the summer, when the large red doors open to reveal floor-to-ceiling windows. The atmosphere here (and, subsequently, in the adjacent restaurant) is more party-hardier than quiet-romantic. Loud contemporary music emanates from speakers that can be heard throughout the restaurant. Overall, this restaurant follows current trends, and not only on the menu.

Inside the rooms, however, all is quiet luxury. The large rooms are accented by a fire pole-turned light, to which lightbulbs and reflectors are attached.  The bathrooms, well-lit and nicely arranged with upscale amenities, include a walk-in shower with a rainfall shower head. The floors throughout are the original bare concrete. Although there’s a rug by the bed, bringing one’s slippers is suggested.

The Foundation Hotel is located at 250 W. Larned St. www.detroitfoundationhotel.com.

If one prefers a less hectic meal, the nearby Townhouse beckons on a warm summer night. It has indoor/outdoor accessibility, and on the night we visited, all the windows were wide open. This allows up-close views of lovely floral displays and an occasional visit by small birds looking for crumbs.

The Townhouse is located just a 10-minute walk from the Foundation Hotel. Any travelers (not just business types) can look forward to relaxing on the Townhouse’s cushioned banquets and enjoy the restaurant’s “American comfort food.” Before ordering from the menu, a good beginning is the “26-24-23.” It’s a specialty cocktail ($12) that consists of a pear-infused ginger vodka, pama (pomegranate) liquor and pineapple juice. Surprisingly, the refreshing drink tastes more of pear and less of pineapple than one would expect.

Fish and steaks dominate the main courses, although some tantalizing vegetarian options are featured, too. The salmon vs. everything ($26) arrived with a crispy crust. True to its name, the top was piled thick with sesame seeds, poppyseeds and a variety of herbs. The size of the fish was impressive, although the crispy crust made the fish a bit dry. This entrée comes with red pearl onions, a large quantity of seasonal mushrooms, sorrel (an herb) and fingerling potatoes.

For dessert, the delicious carrot cake ($10) looked like a small castle turret. The cake was split into several layers. Some of the layers consisted of decadent cream cheese frosting. The entire dessert was sprinkled with ginger-candied walnuts. Truly, it was a dessert fit for royalty. The Townhouse is located at 500 Woodward Ave. www.eatattownhouse.com.

Lunch the following day was not far away. The restaurant, simply called Parc, is in Campus Martius, a rejuvenated park. It contains the city’s “urban beach.” Children play in a large sand lot bordered by concrete, while their parents sit on canvas-covered loungers and (try to) read a book. Young people can be seen strolling about, sometimes on roller blades. A large fountain reminds visitors that water can be viewed all around the downtown area. Pick-up lawn games draw some folks, and the entire area bustles with activity.

It’s much the same inside the restaurant, where servers hurry from wood-topped table to table during a busy lunch hour. The fashionable, mid-century modern décor is highlighted with “chandeliers” that consist of bare light bulbs strung from wires that twist over black-colored metal pipes. Some of the tables feature coffee-colored, velvet banquets. In the back, near the bar, marble-topped bar tables give a hint of intimacy for those who desire it. Parc presents an impressive view of the fountain for those seated near the front of the restaurant.

The busy restaurant was a good sign for a place that has been open for a year plus.

Lunch here began dramatically with flaming burrata cheese. After the fire is extinguished, the slightly charred cheese ($16) is infused with a smoky flavor, perfectly complemented by white anchovy, lemon and chilies. Rustic toast was served to mop up the soft glob of cheese. This size could easily make this a shared appetizer.

Once the cheese disappeared, our thoughts returned to the rest of the menu. It was a tough choice between the sandwiches and paninis, and pasta items. However, the day’s warm temperature has us leaning towards salad. The chop salad ($11) was a filling combination of red cabbage, romaine, chickpeas, pickled cauliflower, and roasted red peppers in a mustard vinaigrette. The colorful salad needed a bit of protein, so adding shrimp ($7) brought five, prawn-sized pieces of grilled shrimp.

The above is only a small sampling of new places to eat and stay during a Detroit business trip – or any trip, for that matter. The city has dedicated itself to “coming alive” again, and there’s ample evidence that they’ve made a good start.

Anne Siegel is a member of the American Theatre Critics Association. She has written about restaurants for the past three decades; her most recent postings can be found in The Wisconsin Gazette. She may be reached at asiegelz.wi.rr.com.