TheaterWorks in Conjunction with Riverfront Recapture 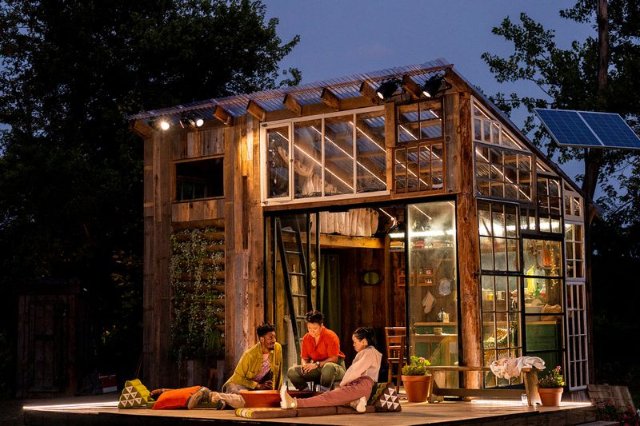 It wasn’t your typical entry into a theater. After parking in the lot, we walked down a gravel road (approximately 1000 feet) until we came into a clearing.  Chairs were set up in a semicircle and in the front was a small structure made mostly of old windows. (Audience members with mobility issues can be transported to the stage.)

After being seated – the folding canvas chairs are socially distanced — and shown the headphones that we are to use during the performance, we checked out the surroundings. Besides the small house with a deck, there was a lush garden, another small building, a hammock off to the side and trees as a background.

This is one variation of “immersive” theater – the audience is connected to the setting and the characters.

Walden is set sometime in the future when the earth is on the brink of destruction from climate change, pollution, food shortages and war. Millions have been killed by a massive tsunami and millions of others are “climate refugees.”

Yet all is calm in Walden where Stella and her boyfriend Bryan await the arrival of her twin sister, Cassie. Cassie has just returned from a year living on the moon as part of a “habitation” since the word “colony” has been banned. Both sisters have worked for NASA, Cassie as a biologist and Stella as an architect before quitting. They are following in the footsteps of their astronaut father who spent over six years in space during his lifetime.

While playwright Amy Berryman uses the environmental and ecological issues, the focus of the play is a more typical family drama – the conflicts between Stella and Cassie over hurts, dreams, futures.

Yes, she does bring in some environmental issues, in part by having Stella’s boyfriend an EA or Earth Advocate, though in reality the play hinges on the sisterly issues.

Why are the twins estranged? Why did Stella quit NASA after designing the rocket for a habitation of Mars? Why did Stella break up with her longtime NASA boyfriend? What does Cassie really want?

And the larger issue of what are we required to do because of a unique talent or ability?

During the course of the 100-minute work, these are explored, some more clearly than others.

All the characters refer to the destruction of the earth and the fact that it is at “the point of no return.”  But what is the answer? For Stella and Bryan, it is living simply in the woods growing their own food and minimizing use of electronics and other “modern” devices. Stella can’t eliminate them entirely, she is addicted to news. Bryan would like to go further but he truly loves Stella despite her reticence and lack of openness. This will stop the destruction and begin the process or reclamation.

For Cassie the answer is that humans must push the boundaries to find places of escape such as the moon habitation and an upcoming foray into establishing a colony on Mars.

The unanswered questions are intriguing or irritating. We get hints that Cassie has followed Stella’s career path and feels abandoned that Stella left NASA. It’s never clear the twins’ relationship with their father – is it the usual “who did he love best?” conflict or something more.

Special praise must be given to production team. You-Shin Chen has created a spectacular set; you can see into the house which looks both practical and charming, as well as the deck and other elements. Jeannette Oi-Suk Yew’s lighting design makes good use of the surrounding woods and greenery. We have realistic lightning and other affects. Plus Hao Bai has created a sound design that we hear through the head sets: birds, wind, nature sounds and more.

The effect is to set us in this natural environment – reminiscent of Thoreau’s Walden which, we should remember, was only a mile or two from the village.

Director Mei Ana Teo and her cast develop the characters that are often just sketched out by playwright Berryman. Gabriel Brown is excellent as Bryan, who loves and is frustrated by Stella and sees in Cassie some of the openness that Stella lacks. Jeena Yi plays Cassie who is torn between her sense of duty and her desires for a more “normal life.” Cassie seems the most fully developed character; you have more understanding of her background and her emotions. Diana Oh plays Stella as both unpredictable and less understandable. Because the character doesn’t reveal as much, the audience is left with both the most questions and the least connection with the character.

Walden has flaws, but overall it raises some interesting (and perhaps unthinkable) questions. The best elements is the way the outside location makes it all seem more realistic.