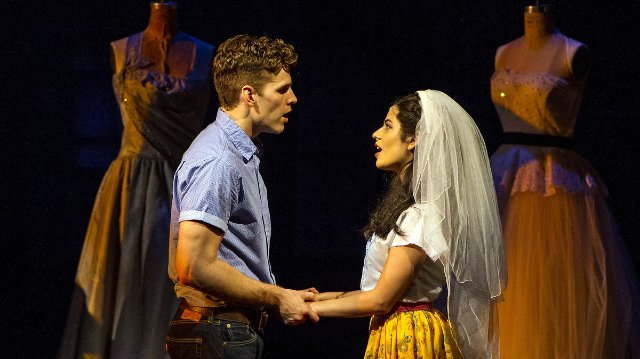 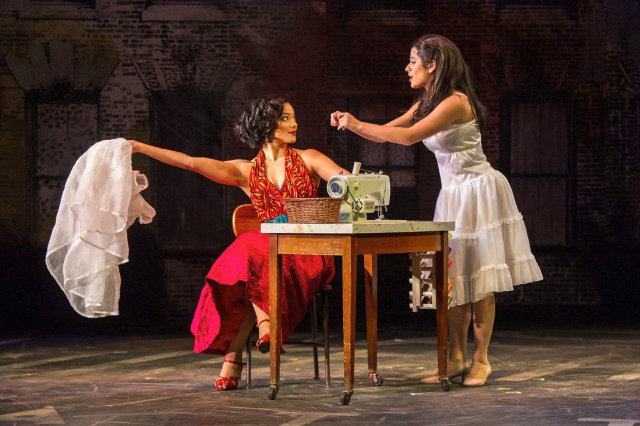 Anita and Maria in the dress shop. 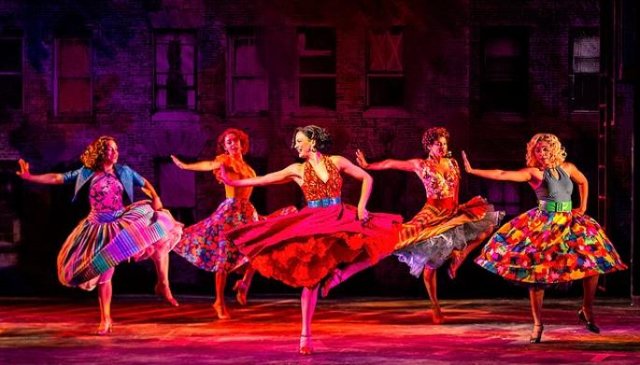 Anita and the Shark ladies in a lively "America."

Opening to generally rave reviews the mid-week performance we attended was sold out. Given the enormous cast, pit band, and production values, lavish for a regional theatre, Boyd rolled the bones. With the odds weighted to a season of Bernstein in the Berkshires she bet on a winner.

When the musical opened on Broadway in 1957, Bernstein was 39, and Sondheim, making his Broadway debut, was 27. The concept of adapting Romeo and Juliet to gang wars in Spanish Harlem was inspired by choreographer Jerome Robbins. Completing the creative team was an enduring book by Arthur Laurents.

The very smart and inventive musical has endured as a masterpiece of American theatre. Through numerous productions and the 1961, Academy Award winning Best Picture, audiences thrill to hear so many powerful and poignant songs. That deeply rooted familiarity comprises the unique appeal of the music combined with remarkably galvanic choreography.

There is the stunning brilliance of having a smitten Romeo (Tony played by Will Branner) climb the ladder of a tenement to join his Juliette (Maria played by Addie Morales) not on a balcony of a palace but rather a fire escape.

The feuding Montagues and Capulets, noble houses of Verona, are reconfigured as the warring gangs, Puerto Rican Sharks, and Caucasian Jets. In hindsight, the conflict between Americans and immigrants is ironic. Consider that Puerto Ricans are American citizens. That contrasts with current horrors perpetrated by ICE toward families and children of undocumented Mexican and Latin American immigrants.

The theme of West Side Story was prescient and accordingly remains fresh and contemporary. Arguably, since 1957, Puerto Ricans have become a part of the vibrant social, political and economic mix of New York City.

The anthem “America” sung with vibrant passion by Anita (Skyler Volpe), Rosalita (Linedy Genao), and the Shark women was a sanguine dream then and now a reality.

For a compelling production of West Side Story it is essential to have a stunning pair of “star crossed” lovers. They have the greatest solos and duets of the musical and provide the romantic fulcrum for an unfolding tragedy.

Following Aristotle’s paradigm the action unfolds more of less in the time frame of a single day.  The arc of that is created when Tony had a premonition “Something’s Coming,” is struck by meeting his lover “Maria,” and then their joyous duet “Tonight.”

These classic songs sent chills through me. Branner is less than a charismatic leading man, however, his superb singing and passion for the role rose to the occasion. We see Morales as an unusually petite, juvenile, innocent and vulnerable Maria. Arguably, that’s closer to the naïve teenager that Shakespeare intended. Those qualities, combined with a small but resonant, lyrical, soprano voice equate to a magnificent and memorable Maria.

Here and there the casting is mixed. Riff (Tyler Hanes), the co-leader of the Jets (with Tony), lacks the snap and pizzazz necessary particularly in the choreography of “The Jet Song” which opens the musical. He misses the mark on anticipated street smart, slithering, sensuality.

In general, the Jets are less compelling than the galvanic Sharks led by a quite wonderful Sean Ewing as their leader Bernardo. He conveyed more seething machismo, outraged honor, and menace than his adversary Riff.

The female chorus of Sharks, led by Anita, was just fabulous. Volpe’s Anita was so compelling, particularly through nuanced acting and depicting conflict, that it made me forget Chita Rivera in that role.

This production remained faithful to the award winning original choreography of Jerome Robbins. There were several highpoints. It was wonderful to see the women swirling their full skirts and crinolines in “America.” One had to gasp and marvel at how Robert La Fosse managed to get so many dancers on a compact stage for the flat-out, exuberant fun of “The Dance at the Gym.”

The rendering of “I Feel Pretty,” a song of fragile hope and vulnerability by Maria and the girls, had me swoon. It endures as a standard and I just love the recording of it by Annie Ross accompanied by Gerry Mulligan.

The plot of West Side Story departs from that of Romeo and Juliet.

The rumble that ends act one, in a flash, morphed from a fair fight to a knife duel in which Riff is killed. Tony avenges the murder of his friend by stabbing Bernardo, the brother of Maria, and boyfriend of Anita.

There is a dated feeling to the cops who generally take the side of the Jets. The intended comic relief of “Gee Officer Krupke” was an embarrassing clunker.

The lovers meet, Tony on the lam, bags for forgiveness and implausibly she agrees to escape with him later that night. Anita, reluctantly, is the messenger for the rendezvous but, when assaulted by the Jets, blurts out that Chino (Alex Swift) has shot Maria for betrayal with Tony.

That sets up the tragic endgame.

In this version, when the lovers find each other, Tony is shot by Chino. In a twist from The Bard, Maria survives as a grieving, gun pointing activist. As her ersatz finance Chino is dragged off by cops we wonder about her future. I’m not convinced that the ending works. I prefer Shakespeare’s version.

It is no surprise that this production is a hit for Barrington Stage. It recalls an era of great musicals when one left the theatre humming their tunes. Nowadays that’s rarely the case.