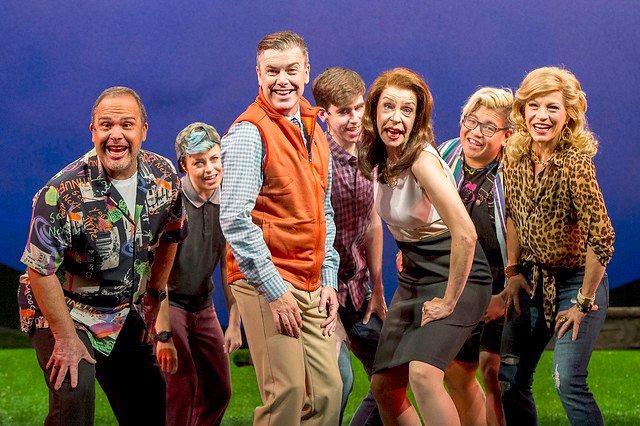 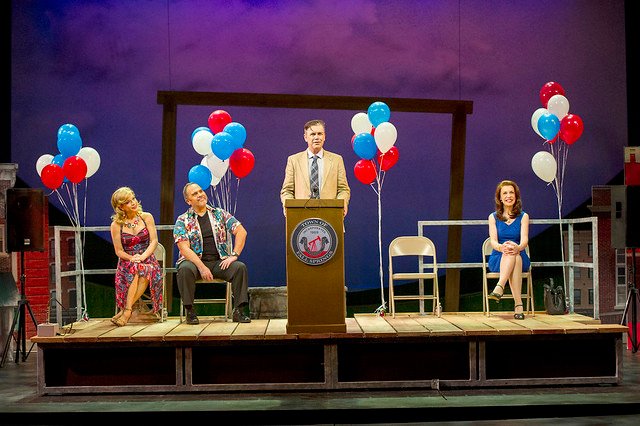 The Mayor promotes fracking to boost own economy. 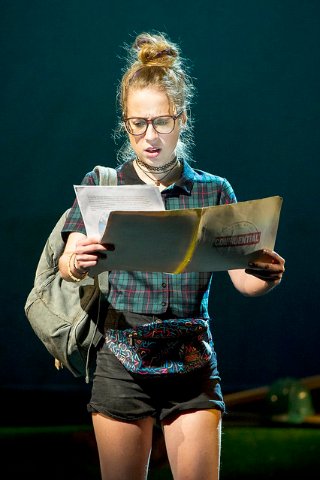 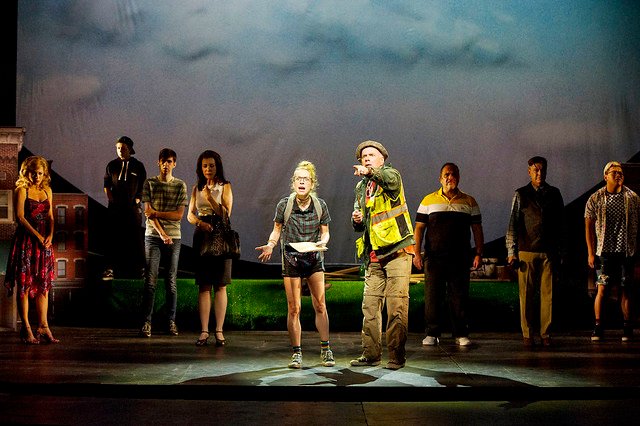 The first design impression (by Tim Mackabee) of the set for Fall Springs, sited anywhere in rural America, is a bucolic, benign musical update of Our Town. A series of flats indicate generic downtown structures. They are graphic and conceptual with no attempt at illusion.

That’s an apt visual metaphor for this world premiere production that careens between serious social/ political commentary, really dark comedy, and bank shots off theatre of the absurd, gonzo sci-fi, and wiggy farce. There are stark contrasts between evil and corrupt adults, doing all the wrong things to earth and environment in the name of the almighty dollar, and nerdy, idealistic, do the right thing teenagers.

The dichotomies of good and evil are sharply defined with a plot line that is as flat and cartoonish as the one dimensional simulacra of an idealized town. By the end of the first act and beginning of the second, that propped up communuity comes tumbling down.

With the intention of creating a topical musical the creators have focused on the controversial issue of fracking.

Hydraulic fracturing is a well stimulation technique in which rock is fractured by a pressurized liquid. The process involves the high-pressure injection of 'fracking fluid' into a wellbore to create cracks in the deep-rock formations through which natural gas, petroleum, and brine will flow more freely.

The nice guy, Ken doll Mayor Robert Bradley (Matt McGrath), with all the charisma of Pat Boone singing “Blue Suede Shoes,” wants to do the right thing for his economically challenged town.

It is sitting on top of a stash of essential oils used in a range of products marketed by the comically evil and corrupt entrepreneur Beverly Cushman (Ellen Harvey). Her tag line is “Call me Beverly.” The wells are running dry and profits are evaporating. The answer is perfectly safe, and not to worry, fracking.

The deceased wife of the Mayor, a geologist, thought differently. She died when a cave she was testing collapsed. Her daughter, Eloise (Alyse Alan Louis) pursues her mother’s research and comes to dire conclusions.

For reasons that are never clear the four teens have single parents. Their rock band rehearses in an abandoned structure on the edge of town. It is the first to tumble down as the town sinks into the sludge, mud, and quick sand that results from fracking.

With max mishegoss things go terribly wrong. They are doomed until our hero Eloise comes up with a desperate plan for escape.

Most of the evening was a head thumper but there were entertaining moments. The cast is terrific and they can really belt out the tunes. In that regard, Harvey, as “call me Beverly” was truly amazing.

Her nerdy son Felix (Sam Heldt) had wonderful moments as a conflicted, love sick, awkward teen. As ‘just the bass player’ in the band the other kids dis and ignore him. His “The Bass Player’s Lament” is poignant and moving. We really feel for the kid who loves Eloise to pieces. Overall, Louis was convincing as Eloise.

Much is made of environmental denial. The obvious political references evoked howls from the audience particularly interns in the back rows. Eloise knocked home a terrific plea for facts and logic “Gimme Science.”

When things fall apart there was a silly sidestep into Le Théâtre du Grand-Guignol. The teen Cooper Mitford (Jorrel Javier) the drummer in the band has wandered off to rescue their instruments. He precariously tiptoes through the quick sand to regain the temporary safety of the bandstand in the center of town. The mayor has a wavering moment trying to pull him up from the goo.

In so doing, good grief, he yanks off Cooper’s arm. OMG!

With the exception of the bashed and shattered geologist Noland (Ken Marks) they all get out alive. We won’t spoil just how. But they rally for a ridiculous finale. While now short handed so to speak Cooper vows to carry on. In utter shock and disbelief we watched the cast belt out “One Arm.”

One of the greatest theatrical challenges entails developing musicals. It is usual for first responder reviewers to write that the production “needs work.” In this case a better question might be “does it work?”

Frankly, a musical about fracking is a long shot. In an era of too many whimpy juke box musicals, hats off to Barrington Stage for giving us something to think about.