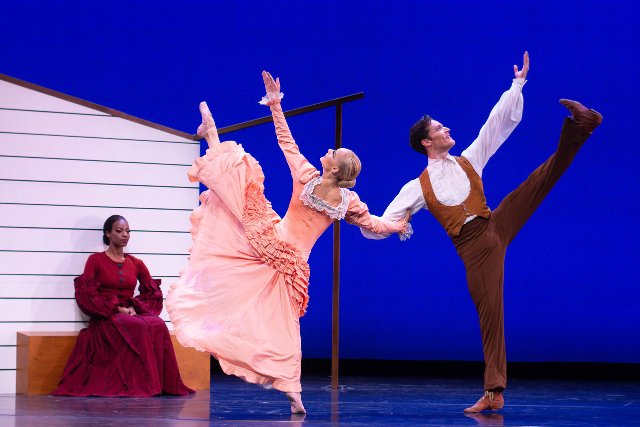 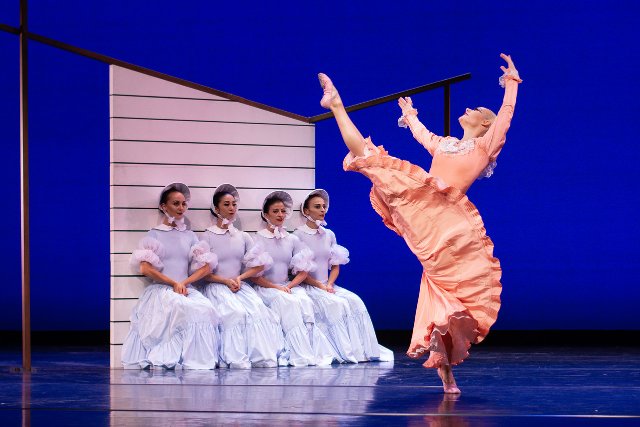 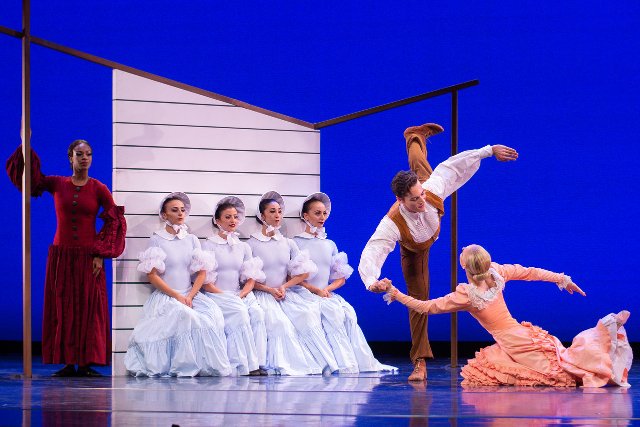 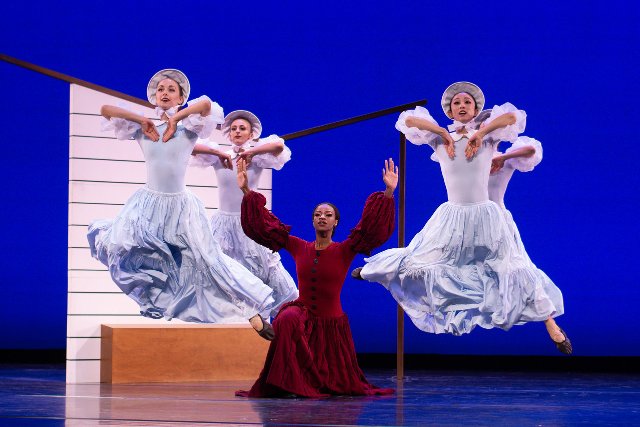 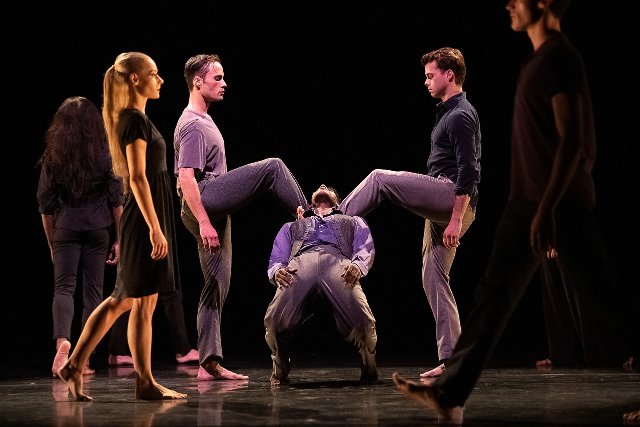 The greatest modernist dancer and choreographer of her generation, Martha Graham (1894-1991), had a long and unique connection to Jacob’s Pillow.

In the mid-1910s, Martha Graham began her studies at the newly created Denishawn School of Dancing and Related Arts, founded by Ruth St. Denis and Ted Shawn. She left to pursue her own choreography in 1923. The early work, a performance of solos, reflected their style and influence.

In 1926, the Martha Graham Center of Contemporary Dance was established. She would say of her first concert: "Everything I did was influenced by Denishawn." Since her death the company, the nation’s oldest, has returned to Jacob’s Pillow five times including this week.

While the company preserves her legacy and teaches her technique it also features new work. The program we saw last night provided an intriguing balance of old and new that was fresh, vital and charged with her vision and mandate.

Her technique entailed "contraction and release." Each movement expressed positive or negative, freeing or constricting emotions depending on the placement of the head. This evolved in opposition to classical ballet techniques that creates an illusion of weightlessness.

With a nation at war in 1944 Graham, in collaboration with composer, Aaron Copland, and sculptor/designer Isamu Noguchi, created the iconic and affirming Appalachian Spring. Since then it has come to be recognized as a masterpiece and a virtual declaration of independence for the primacy of American dance.

Until then the American arts and  culture were largely regarded as provincial and subordinate to the arts in Europe. On stage the piece evokes the regionalist paintings of Thomas Hart Benton and Grant Wood. The work is unabashedly a celebration of rural America.

In 1943 Agnes DeMille brought regionalism to Broadway in the choreography for Oklahoma.

After the war the arts in American survived intact and evolved as globally dominant. As seen last night her Chronicle (1936) was already evolving in a break from classical ballet to an avant-garde focus on form, movement and narrative through expression. Gone were toe shoes and tutus in favor of tunic-like, long black costumes that emphasized the natural forms of a woman’s body.

The American avant-garde was so dominant that it inspired “How New York Stole the Idea of Modern Art” by Serge Guilbaut and Irving Sandler’s “The Triumph of American Art.” Graham was to American dance what Jackson Pollock was to abstract expressionism.

Asked by a colleague if she preferred to be remembered as a dancer or a choreographer she responded “as a dancer.” That proved to be problematic. She declined to archive or copyright her creations. To some extent they were documented through photographs. She believed that dances, which often featured her, should be living entities unique to that particular performance. That resulted in legal battles and efforts to recreate lesser known works. It was difficult for her to see others performing her works. Retiring from the stage led to depression and illness. She survived, became sober, and created a number of new works until the time of her death. There are debates about her last work and performances.

Seeing Appalachian Spring was stunning and galvanic. I recall an excerpt on the early television arts series Omnibus. But it was our first encounter with a live performance. It reignited notions of Graham as a narrative creator. Abstractly, the work does indeed tell the rural tale of a young couple being married on their farm. That is abstractly referenced in the skeletal set by Noguchi. One marveled in his very sculptural but Shaker inspired design for a simple, functional chair. A spectral presence The Pioneering Woman uses it cautiously as a perch to view the other characters. In a stunning sequence the living wife hands her infant to the spirit woman.

The story is told with simplicity and passion. Graham performed as the bride and a young Merce Cunningham was the original groom. The role of the fundamentalist pastor is intriguing and ominous. Graham came from a deeply Christian family. He is accompanied by four young farm girls with Mennonite caps. They seemed as intent on serving the pastor as The Lord.

Deo, which had a recent premiere, couldn’t have been more different. There was ominous, repressive, digital sound by Lesley Flanigan. It is a metaphor for a weight hovering over seven women whom we first encounter lying down. They wear long, loose, beige dresses. The muted, body clinging fabric blends in with the subdued lighting designed by Yi-Chung Chen. The ensemble mood creates a sense of solidarity with lines forming from which now and then a single woman emerges and is featured. The movement is sensual and compelling.

In 2007 the company gave a New York performance that coincided with the anniversary of 9/11.  Graham’s solo Lamentation premiered on January 8, 1930 at Maxine Elliott's Theatre in New York City. The decision was made to project a silent film of her performance. She wears a signature, loose dark costume. From within it is stretched and accentuated to express grieving.

The artistic director, Janet Eilber, commissioned three short pieces inspired by a projection of Lamentation. We saw works by Liz Gerring, Michelle Dorrance, and Aszure Barton. As we have seen the Dorrance company on several occasions it proved to be the most intriguing. While not executed in tap, other than the sound with bass player Jaco Pastorius, the movement was familiar as individuals formed and walked through grids. The other dances entailed aspects of falling. There are now some fifteen Lamentation Variations.

The program concluded with Chronicle (1936). In its orginal form the work in several sections was rather long. Too much so for original reviewers who responded to its expressive anti-war and humanistic content. Over time it has been rediscovered and reworked.

It was her response to The Great Depression and the Spanish Civil War. The first section Spectre-1914 features a woman in a long black dress with red lining. The form fitted upper body yields to a full skirt. To the martial music of Wallingford Riegger there is a call to arms of a world at war. The second section Steps in the Street features a soloist in a white dress with black accents and eleven women in long black dresses. It expresses devastation and homelessness. The final section Prelude to Action signifies the coming global conflict and resistance to fascism.

Significantly, in 1936 Graham was invited by the Nazis to perform as a part of the Olympic Games. She declined and Chronicle, which was created independent of that invitation, is viewed as her response.

It is intriguing that Chronicle, from 1936, while narrative in intent, is abstract compared to the more literal Appalachian Spring of 1944.   The latter is being performed as a part of the company’s Eve Series. These are works by Graham, as well as commissioned works like Deo which celebrate the contributions and lives of women