From Favelas to World Stages 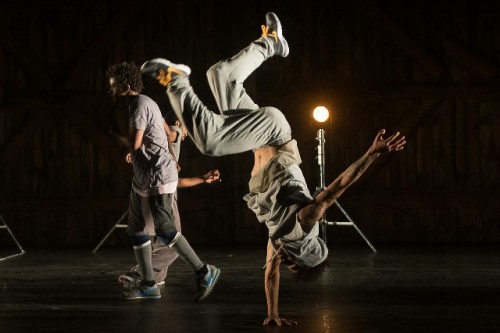 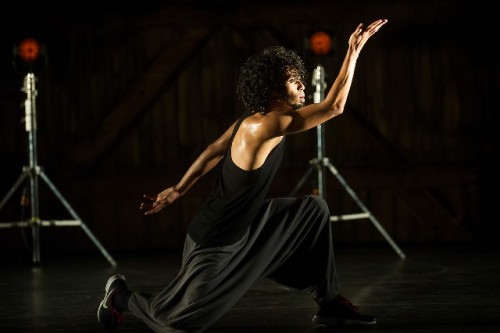 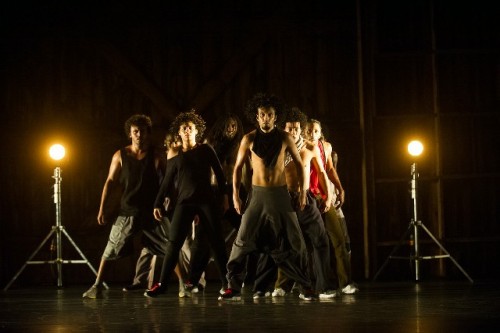 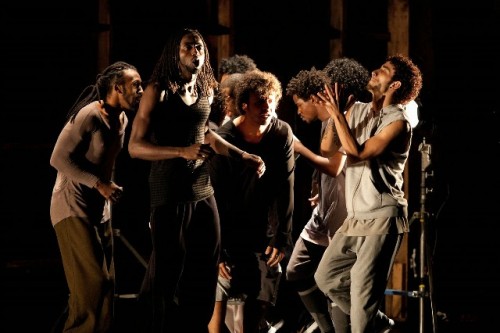 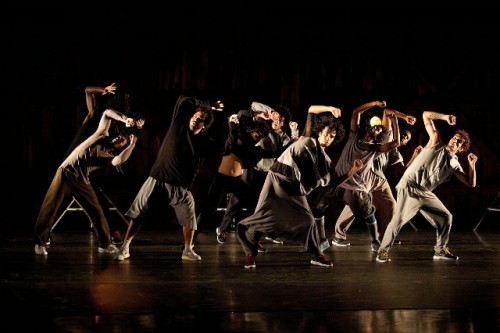 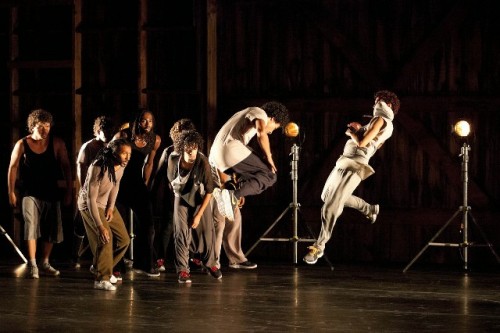 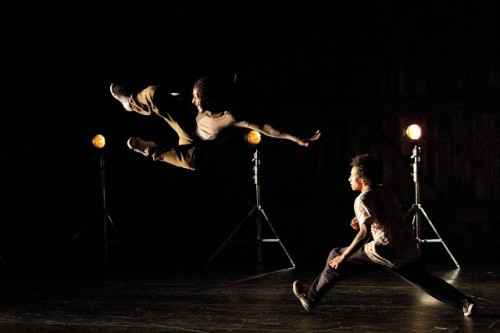 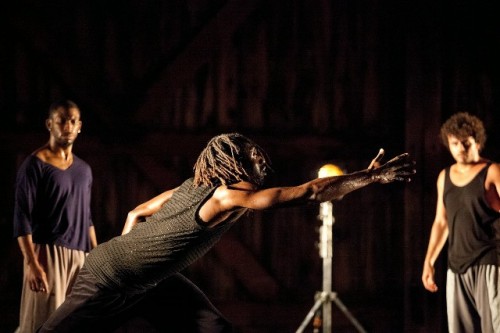 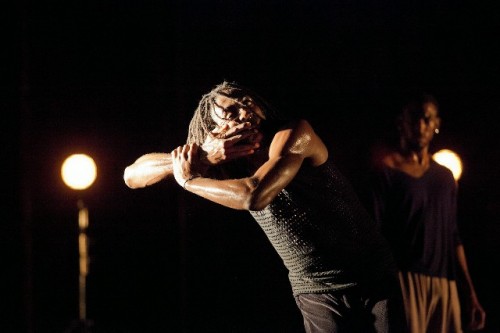 Last year the debut of the Brazil based, hip hop company Companhia Urbana de Dança was a highlight of the season for Jacob’s Pillow Dance. They have returned this year with a program of two, hour long dances: I. You. We…ALL BLACK, a world premiere in Becket, and Na Pista (2012).

The two halves, one dark and reflecting on race and violence, the other joyous and upbeat, taken together represent the recto and verso of what it means to be a person of color in Brazil. It is a large nation which over centuries has blended into many shades of ethnicity with a rich cultural heritage from Samba to Foosball.

The ever present dichotomy of culture/ sports and violence was highlighted by riots during the recent World Cup soccer games.

As is typical for this sensational ten-year-old company its artistic director, Sonia Destri Lie, conflated these elements of anger, frustration and visceral street derived indigenous dance into a compelling new work having its premiere at Jacob’s Pillow.

For concerns of misunderstanding the title of the piece was changed. Like the word “Nigger” in our culture so too “Nêgo” can be used as a term of affection among people of color and unacceptably offensive when used in a derogatory manner.

As discussed in the New York Times “ Originally titled “Nêgo,” it explores the multiple meanings of this word, a derivative of the Portuguese “negro,” or black. “Nêgo captures the sense of veiled racism that we have in Brazil,” Emilia Spitz, a Rio-born, London-based dance writer, said by email. “It’s not rare to see people refer to each other affectionately as ‘meu nêgo,’ but at the same time, it can be used as a derogatory term.” (Nervous that the title could be taken the wrong way, the festival suggested that Ms. Destri change it for the premiere here. It will go by “Nêgo” in Brazil.)”

By any name the complex work is galvanic.

It began and ended with the tight grouping of eight men and one woman. Initially there was silence and gradually they moved to their own chanting and dialogues in Portugese. The audience may not have understood the words but the tone and intent proved to be universal. Eventually there was music composed by Rodrigo Marcal with electronic sounds and rhythm.

As artistic director Ella Baff previewed during an introduction, at one point, we heard the recorded sound of the actual riots.

While this implies that the dance was a message or literal work it was never strident or polemical. One observed closely to see aspects of threats and violence. During one sequence, for example, the single woman in the company, Jessica Nascimento, was surrounded by a circle of threatening men. She fended off and shoved against them as a signifier of self defense.

Immediately there was a sense of wonder and fascination about what we were experiencing. Unlike anything else we have seen just where was this dance coming from? There was a delight in its tension, originality and unfamiliarity.

While awesomely talented, with incredibly inventive and unique moves, there was little or no indication of classical training in any set tradition. Through program notes we were surprised to learn that the artistic director of the company, Sonia Destri Lie, was trained in and has taught classical ballet.

In forming the company she was inspired by the street culture and dance that evolved from the development of break dancing, b-boy, and hip hop that is attributed to starting with the black and Puerto Rican communities in the 1970s. In fact it goes back further perhaps to ragtime and the minstrel shows of the late 19th century to the jitterbugging of the Savoy Ballroom in New York in the post war era. There is the tradition of cutting contests among musicians and dancers mostly in after hours clubs. Where would you put Bill Bojangles Robinson, Clayton Peg Leg Bates, Sammy Davis, Jr., Gregory Hines, Tina Turner, James Brown, Michael and Janet Jackson, or Madonna in this spectrum from jazz to hip hop?

Looking at the Brazilian company there are flavors of these traditions but in a new, visceral and yet remarkably disciplined and sophisticated mélange.

In New York's sidewalks, subways, or the area in front of the steps of the Met we are familiar with the invention, bravado, competition and machismo of this showboating style. It is an expression of male competition and preening. There are elements of spraying one’s turf in gang culture or the mating rituals of alpha males.

Amazingly, this paradigm of the individual has been harnessed by Lie in a manner that the whole is greater and more resonant than the sum of its parts. But within this orchestrated and designed choreography none of the individuality and unique moves of the dancers have been compromised. She has provided a structure for them to exist and thrive.

This is very different from the samo samo response of seeing a street group strut their stuff no matter how spectacular the individual moves. We have enough and disengage precisely because of familiarity and that the dance is going nowhere beyond the moves of any individual.

Here we were conscious of the individual skills, and the intense sense of competition among this group of Brazilian all stars, and yet become enthralled by ambitious works in movements with shifting themes and resolution.

As tough, ghetto street art there is the male dominant struggle for survival. Jacob’s Pillow is a hell of a long way from the dangerous, drugs, crime and prostitution in the slums of Rio. As we are vividly aware in America black life is regarded as less valued than white life.

Seemingly there is no place for a woman in this macho art form.

This is precisely why Jessica Nasicimento is so remarkable and essential to the company. The stunning young woman, with beautiful face, taut body and soft, natural fro is the glue that binds the group. She keeps up with their every athletically challenging move. There is a wonderful paradox as she is both tom boy, one of the gang, as well as feminine and seductive. They compete for her attention and she in turn flirts with them.

This is particularly evident in the second part of the program in the party flavored Na Pista.

There is the device of chairs. Initally an amusing verion of the ancient party game Musical Chairs. The music stops and then is always one less chair to sit upon. Down to the end it’s kicked over which changes the game. Now all eight circle for the final seat.

The chairs then form a line. Seated they dance with feet and hands. There is an interesting element where at intervals they simultaneously swig from water bottles. Then with a click they are snapped shut.

Her chair is then set up in front of them. She has reappeared wearing a gold brocaded jacket for a party flair. Seductively, she solos in front of the eager array of hungry wolves. Then she rises to torment and tease them individually. The steamy sexual tension becomes palpable.

Through the course of the program we come to indentify individuals and their moves. The tallest in the group, Andre Fijao, is striking with dreads and arms that just reach out forever. He used his arms and hands expressively. You were enthralled by the swagger and confidence of the bearded Miguel Fernandes. With his at times comical moves on Jessica it seems that Julio Rocha was cast as the lover boy of the ensemble.

Truth is that individually and collectively they were enthralling. Not surprisingly the curtain call and bows just went on and on. They were clearly moved and appreciative of such an overwhelming Pillow reception.

Last night was truly an incredible and unique experience. It’s what we have come to expect from Jacob’s Pillow.