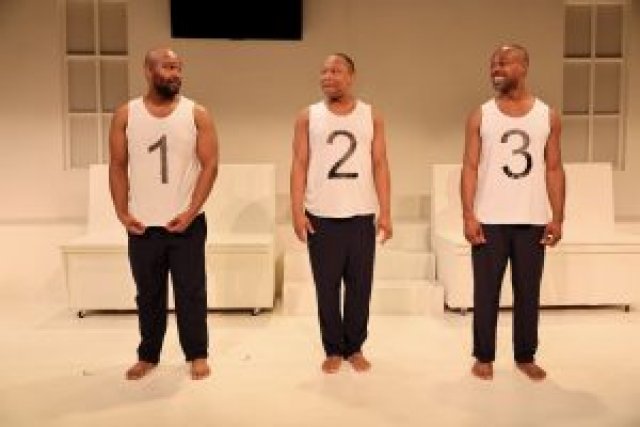 Photo by Matthew Tippins The cast of Island City Stage’s production of “One in Two” prepares to face the audience. 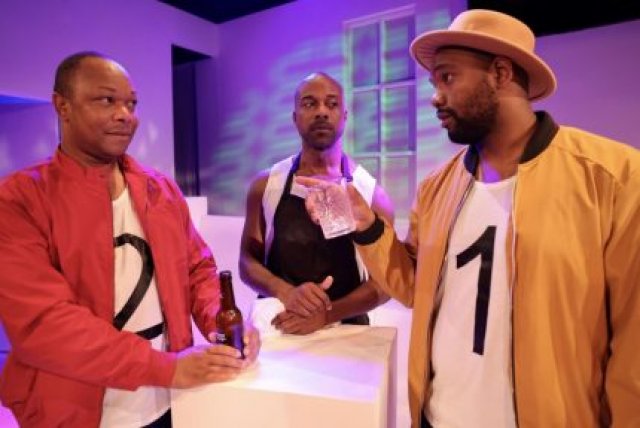 Photo by Matthew Tippins Members of the cast for Island City Stage’s production of “One in Two” interact.

The last show that Island City Stage (ICS) mounted elicited plenty of laughs. After all, the play was the hilarious 1984 spoof, The Mystery of Irma Vep, and ICS’s production was impressively comic.

By contrast, ICS’s current show centers on a topic that hardly sounds like a laughing matter. In particular, it is HIV, the virus that causes AIDS.

However, in a piece, playwrights can take a comic approach to grave subject matter and still imbue it with the respect it demands and deserves. An example of such a work is the touching, funny, and complex, One in Two by Donja R. Love. It is an absurdist comedy-drama on ICS’s stage in a wryly funny, touching, believable production through Sept. 4.

In a program note for a previous New York production, Love explained that One in Two’s inspiration came from a 2016 Centers for Disease Control and Prevention study. Specifically, it found that one in two Black gay and bisexual men will receive an HIV diagnosis in their lifetime.

“This is absurd,” Love wrote after learning that his HIV-positive status was so prevalent in his community. “And this play needs to reflect that.”

And, so, audiences will experience an approach in One in Two that they may think belongs in a Samuel Beckett absurdist comedy. Metatheatrical sequences, fourth wall-breaking, childhood games, as well as odd names for characters all show up in this play. Perhaps these help the characters cope with the gravity of their situation. Comedy can also disarm an audience, making them more receptive to serious material. Rest assured that Love has included touching moments that reflect the seriousness of an HIV diagnosis. Bring a handkerchief; tears may flow. Under director Delicia Turner Sonnenberg’s assured guidance, the production gives equal weight to the pathos and humor in the script.

This play can be dizzyingly complex and confuse folks if they do not pay close attention. For starters, Love does not tell this story in a linear manner. Perhaps the action unfolds as it might in a dream. You have to follow along as best you can and allow the material to affect you. Chances are, something in this moving play will.

When we first meet the characters, three black males, they are merely “Person on the Left,” “Person in the Middle,” and “Person on the Right.” We find them in a mysterious waiting room that they cannot seem to escape. The two-level flexible set, which scenic and lighting designer Ardean Landhuis designed with simplicity, is almost completely white, pristine, and clinical. In fact, the characters, as they should, seem out of place in the setting.

One of the dark areas on the set is a board on which the number increases throughout the play. It is easy to infer that the numbers correspond to cases of HIV-positive diagnoses among Black gay and bisexual men. At times, we hear a loud and upsetting tick-tock sound, possibly reinforcing how alarming it is that the numbers are so high. Or, maybe the sound emphasizes the sense of urgency to take action so that the number of diagnoses will lessen.

The actors play performers who, in turn, play different characters. In this way, One in Two assumes a kind of play-within-a-play format.

At each performance, we, the audience, determine which actor will play performer #1, who portrays an HIV-positive playwright named Donté. Simply, the performer who garners the loudest applause when he steps forward gets to portray Performer #1/Donté. To determine which actors will play performers #2 and #3, each of whom portray multiple characters, the artists play games such as “Rock Paper Scissors.”

Clearly, the central character is Donté.

“I’m writing this dreamlike play that’s set in the middle of nowhere and nothing,” he notes. “Or maybe (it is) a waiting room?”

We come to infer that Donté is a stand in for the HIV-positive Love, who is writing about his life in One in Two.

During flashbacks, we meet the characters as children playing various games. Their past is almost like the calm before the storm, when they will either need to deal with their own HIV-positive diagnosis or that of somebody in their life. The characters include a nurse, a bartender, folks taking advantage of programs at a support center for HIV-positive patients, Donté, as well as his caring, activist mother.

Expect for Donté, the characters do not have traditional names. For instance, “Kinda-Ex-Boyfriend” is someone whose relationship with Donté is a bit complicated. Other characters have rather generic names such as “Married Man at the Center” and “Banji Cunt at the Center.” Perhaps such non-specific names, and the numbered performers (#1, #2, #3) are symbolic. Specifically, maybe they reinforce the notion that people afflicted with diseases eventually become statistics rather than flesh-and-blood people with feelings and life stories.

“Should we tell them what this is or anything about ourselves?” Performer #1 asks Performer #2.

“What’s there to know?” #2 answers. “This is a story. Someone’s story. And we’re just numbers. I was Number Two, you were Number One, and he was Number Three. That’s all they need to know and probably the only way they look at us anyway. Numbers. Statistics.”

Also, clearly, Love is irritated at the fact that black, HIV-positive gay men do not receive as much attention as others, even though the statistics are alarming.

“This is still an epidemic,” #2 notes. “One in two is an epidemic. But, it’s like people don’t care. Is it because I look the way I do? My story isn’t important because I don’t look like I could’ve been in The Normal Heart or Angels in A-fucking-merica? Is that it? Well…I just wish everyone would stop staring at me, ‘wishing me well’ and do something. Anything…It’s like there are so many stories of people dying from AIDS, but not living with HIV. I just…I wanted to tell that story. Ya know?”

By the way, The Normal Heart is a largely autobiographical play by Larry Kramer. It focuses on the rise of the HIV/AIDS epidemic in New York City between 1981 and 1984. Kramer tells the story through the eyes of Ned Weeks, the gay founder of a prominent HIV advocacy group.

Meanwhile, Angels in America: A Gay Fantasia on National Themes is a two-part play by Tony Kushner. Altogether, the Pulitzer-Prize winning play lasts almost eight hours. It is a complex, often metaphorical, and at times symbolic examination of AIDS and homosexuality in America in the 1980s.

Obviously, One in Two, which runs about 80 minutes without an intermission, is not as complex or symbolic/metaphoric as Angels in America.  However, similar to The Normal Heart, but but to a lesser degree, a sense of urgency grips the action in One in Two as the number of cases rise.

One of the things that quality live theater can do is not only enlighten us, but move us to action. True, One in Two focuses on numbers. However, it also tells achingly human, relatable stories that make us identify with the characters and want to take action on behalf of people like them. Certainly, the story in the play about a mother who lost her only son to AIDS will touch many people. Donté’s mother is also a relatable character, especially to activists and mothers devoted to their children.

Today, decades after the height of the AIDS epidemic, the disease may not garner as much attention as it did in the 1980’s. Likely, that is because medications have existed for a while that keep a diagnosis from being a death sentence. Even so, living through the COVID-19 pandemic may have made people more willing to learn information about other conditions. Perhaps, after hearing that one in two Black gay and bisexual men will be diagnosed with HIV during their lifetime, and learning about medication side effects, people will feel called to action.

Speaking of action, ICS’s production is compelling. That is in large part due to the three actors’ impressive performances. During the reviewed performance, Kevane La’Marr Coleman received the loudest applause, and therefore portrayed #1/ Donté. Coleman imbues the character with a touching vulnerability and sensitivity without resorting to self-pity.

All three actors – Coleman, Nathaniel J. Ryan, and Randall Swinton – create believable characters, and deliver moving performances. The actors also sound and move like children during scenes that take place during the past. In addition to credible playfulness, the three performers find the right comedic tone for the dryly comic scenes.

Behind the scenes, Landhuis’s atmospheric lighting is sometimes realistic and intense, as though calling attention to the themes in the play. At other times, softer lighting creates a dark, romantic ambience for when the characters have sex or kiss. Intimacy director Nicole Perry ensures that such scenes look real, while keeping the actors safe.

Of course, the playwright has obviously written this piece with mature adults in mind. Even so, while there are scenes of lovemaking, there is nothing graphic.

Under costume supervisor Casey Sacco, the outfits that are most telling are the white shirts that the performers wear in the beginning. Their number appears on the shirts in black letters, making them clearly stand out.

Kudos to ICS for choosing to produce One in Two, and thus shining a light on a perhaps little-known statistic. Very possibly, such knowledge might move people to action.

ICS is a multi award-winning professional, nonprofit theater company in Wilton Manors. Its goal is “creating quality professional theatrical experiences focused on the LGBT+ community for a universal audience.”

Island City Stage’s production of One in Two runs through Sept. 4 at ICS’s theater, 2304 N. Dixie Highway in Wilton Manors, near Ft. Lauderdale. Tickets are $35. For showtimes, and to purchase tickets, go to https://islandcitystage.org/one-in-two. To help organizations that are working to reduce new HIV infections, you might start with Ujima Men’s Collecting. Email them at ujimamen@gmail.com, or you can call them at (954) 533-9139. The World AIDS Museum can also point you in the right direction. Call (954)-390-0550 or email info@worldaidsmuseum.org.