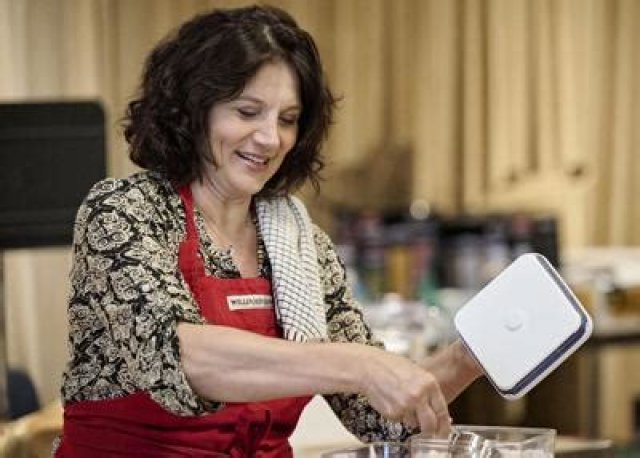 Secondo, the world premiere play at TheaterWorks – Hartford is like a great beach book. It combines humor with some romance and minor suspense.

You may not think about its meaning days later, but you will have enjoyed it, just like eating an ice cream cone.

The only question you might want to ponder is why some people are inevitably attracted to the wrong person and when they do find the right one, become disappointed.

Secondo is a sequel to playwright Jacques Lamarre’s adaptation of the book I Loved, I Laughed, I Made Spaghetti by Giulia Melucci. In the original book, Melucci told of her many romantic adventures with disastrously wrong men for whom she often cooked Italian food or for herself after a breakup.

The original play, done at TheaterWorks in 2012 had the Melucci character actually cook on stage while regaling us with her stories.

The new play again has Melucci in the kitchen but this time cooking her 10th-anniversary dinner for her husband, Gavin, who is returning from the Cannes Film Festival.

But if last time, things in the kitchen went relatively smoothly, this time various things go wrong, from scalded milk to missing lady fingers and more. Are these symbolic of some discontentment between the two?

As she cooks, she tells us how she met Gavin, their romance, life and most recent contretemps.

Since this romance went rather smoothly and the marriage for the most part seems good, there isn’t a lot of drama to keep us involved. Yes, though there are the missteps in the kitchen and the fact that just before Gavin left for Cannes they had a semi-serious argument, things seem to be going well. Except for late in the play when Melucci drops a small bombshell.

But don’t be alarmed; she realizes her good fortune and is ready to welcome Gavin home with open arms and a delicious, if not perfect, dinner.

One key to the success of this piece is managing audience expectations. Think of Secondo as a sitcom where the problems aren’t very big, and the humor is gentle. More the Mary Tyler Moore Show and less like some of the wilder scenes in I Love Lucy.

The second key is the actress playing the part. Here director Rob Ruggiero and playwright Jacques Lamarre are fortunate to have Antoinette LaVecchia return to play Melucci. She manages the extensive multi-tasking of chopping, cooking and cleaning up while talking to the audience. She is warm, inviting, and charming. She creates a relatable character.

She cooks (and samples one) uovo in ravioli, a larger ravioli with ricotta and an egg yolk; she first cooks and then sautés them in brown butter and sage. She even makes the pasta. I wanted a sample.

As with many one-person shows, phone calls are used as an excuse to provide information or signal mood changes. Here she gets calls from her husband, her mother and another person.

The set design by Brian Prather features a lovely functioning kitchen with stove, sink and refrigerator.

Secondo isn’t great drama or memorable, but it is charming and sweet. We all need that sometimes.

It runs through Sunday, Aug. 28. For tickets, visit TWHartford.org