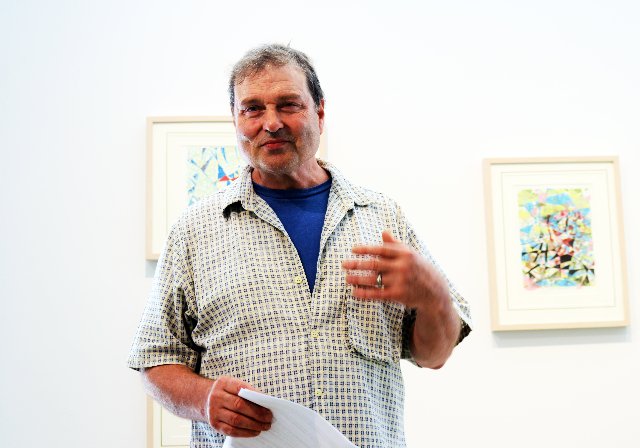 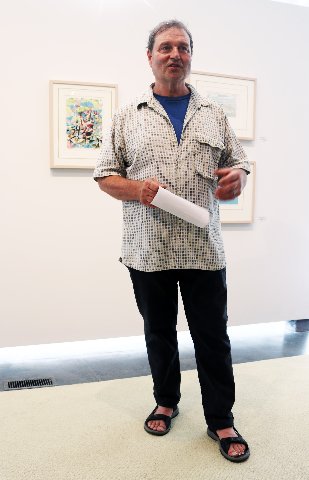 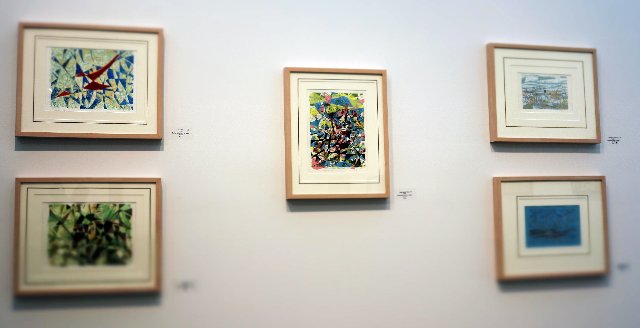 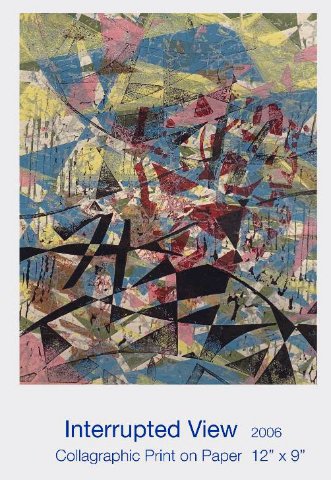 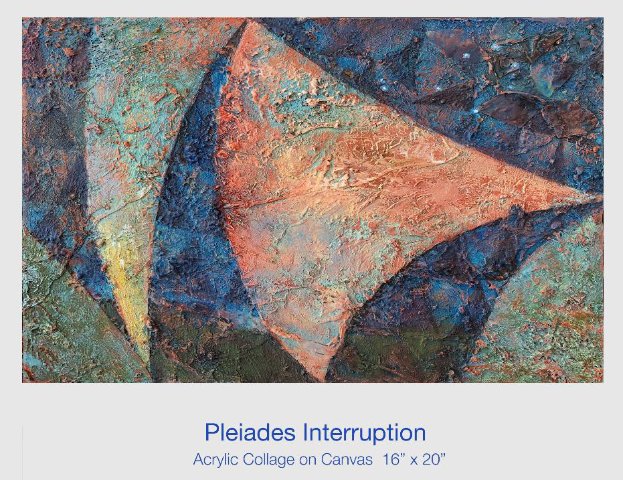 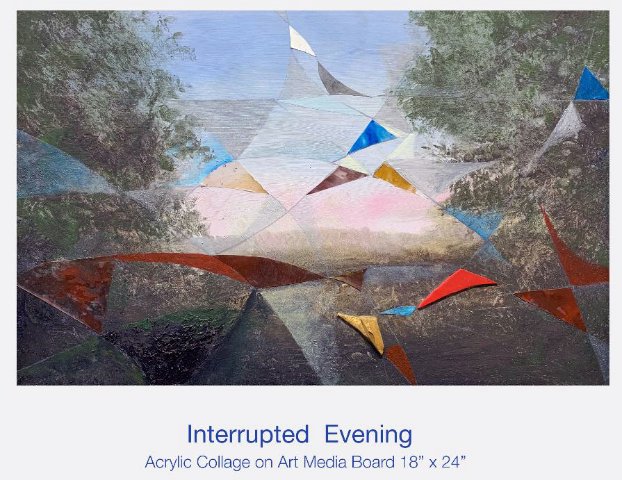 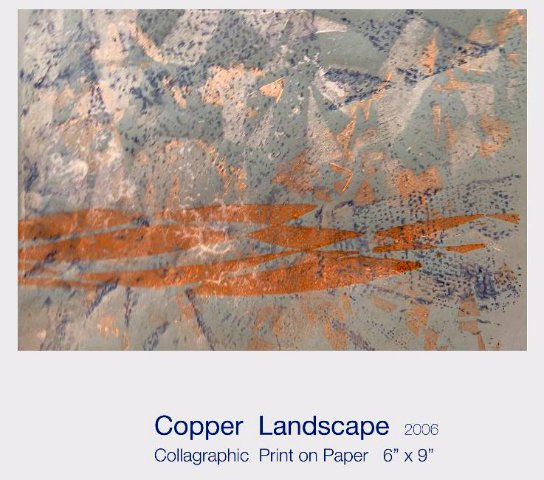 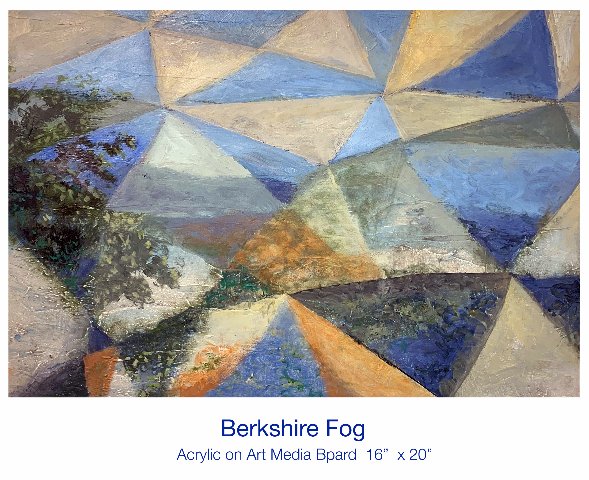 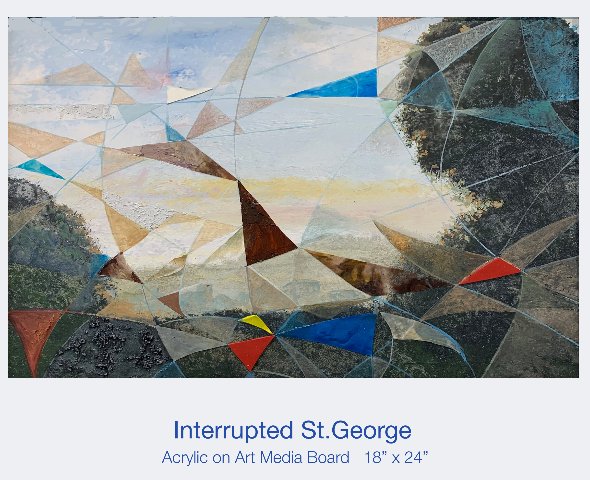 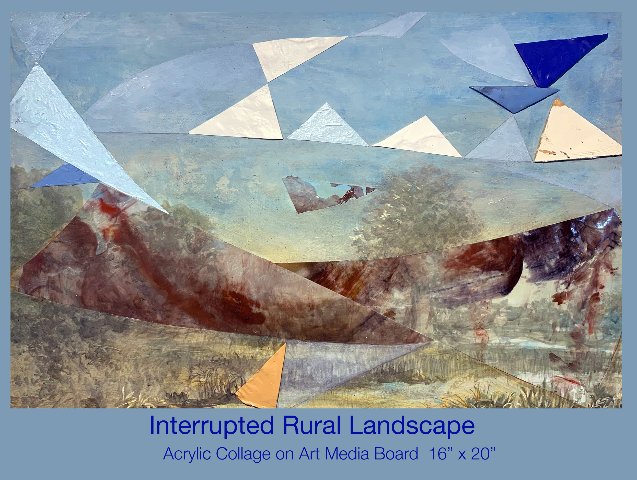 During August, Real Eyes Gallery in Adams, Mass. is featuring Interrupted Landscapes by the artist/ gallerist Bill Riley. He wears a number of hats. Another is as now retired scene painter for the Metropolitan Opera.

The latter entails formal technical training that allows for creating images in any period or style. It also means working on very large scale both quickly and efficiently.

For most scene painters creating  on demand curtails pursuing their own work in the studio. In that sense Reilly is the rare exception. With the freedom of being in his own studio he enjoys applying the many techniques of commercial jobs to abstracted paintings.

The norm is to develop new techniques long before they are incorporated into fine arts studio practice. An example of this is printing images on canvas and then enhancing or reworking their surfaces.

As Riley explained during a fascinating artist’s talk an image for a set might first be printed then fixed. This allows to create something quickly and efficiently. Photo on canvas has become a standard approach to scenic design.

We see a number of examples of this approach in the exhibition. Typically, there is a landscape seen through overlays. Another common element is the use of triangles of color that evoke sails, vectors or aspects of cubism. There is a layering through which we delve down to the initial landscape and absorb the how and way of its alterations.

His interest in art started with a local teacher who took students to The Clark Art Institute and introduced them to the masters. Walking through the galleries entailed absorbing the work on many levels.

Later, in art school, that changed. It became sitting through art history classes and having to memorize a lot of data. Reilly recalls becoming bored and overwhelmed.

In the studio those examples of art history were ripped out of books and magazines. A layer of acetate was taped over them and then a grid was created. The assignment was to copy anything from an Old Master painting to Cubism by Picasso. While he respected van Gogh, for example, when copying his work the artist was just Vinnie. The audience was amused by his often anecdotal, pragmatic approach. Breaking down the components of art history meant access to a vast range of possibilities. It involvd having the skill set to create whatever the job requires.

Given his track record and reputation Riley has been free lancing for movies and television. If you look closely you will see his work in the hit Amazon comedy series The Marvelous Mrs. Maisel. He describes the work as challenging, creative and fun.

Approached by design directors they may have an initial idea. There may be a mood they want. Told “somber,” for example, he painted in tones of gray. It seems that Mrs. Maisel visited a Greenwich Village art gallery. He was assigned to make the abstract paintings in the exhibition. Given a certain amount of freedom he enjoyed making the paintings.

In another scene she visits the artist’s studio. To look more authentic entailed making it messy. That was fun. On another day he created a number of life drawings of a male model. They were created from photographs. The mandate was to make them all different with varying levels of accomplishment. This reflected the range of skills of the students.

At times a day or more of hard work doesn’t pan out. The director has the final say which might be different from the vision of the designer and scene painter.

“I’m on the set and the director might ask me to fix it. On the spot and in front of everyone I have to change it and get it right” he explained. That can be a lot of pressure but he seems to enjoy the challenge.

In the studio he gets to put that aside. The greatest joy and satisfaction is creating his own work. Answering to nobody the task is to get it right and please himself. The many new works in the exhibition reflect having more time for the studio. But with a twinkle it’s clear that he is looking forward to another season on the set with The Marvelous Mrs. Maisel. What a great way to make a living.

Technological tools (telephones , computers, and travel vehicles), meant to aid us, now preoccupy our time and thoughts.We find ourselves focused on these tools and our inner selves to the exclusion of the world outside our doors and our connections to it.

My perception of human existence, today, in the early twenty first century is depicted as natural landscapes interrupted by geometric patterning.

These patterns disrupt our attention to be present in the moment.  Acting as symbolic obstructions, when imposed on the landscape, they disrupt the visual trail to our outer world. I use Photoshop to combine my pencil and ink drawings with my photographic images, manipulating the image to create a sense of psychological disorientation. This image becomes the sketch I use to create a painting. I introduce collaged pieces of dried paint skins that I have collected in recent years.

Expressing an atmospheric, hypnotic vision that reveals hidden energy through the use of line and color is my aspiration. I want the vision to feel ancient and brand new at the same time. Humanity in the early twenty first century traversing old terrain in a new way