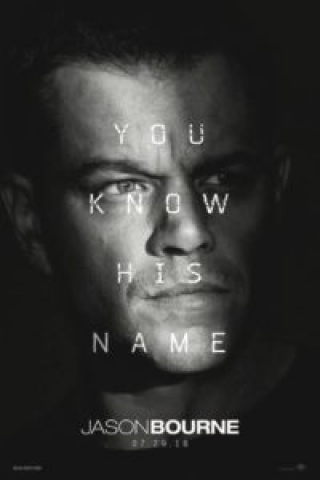 When the Jason Bourne franchise was launched in 2002 with Matt Damon playing the super-secret, “black Ops” government assassin who didn’t know his own name or own life back-story thanks to amnesia, the producers realized they had a gold mine of action-driven series of films that they thought would go on forever: “The Bourne Identity” (2002). “The Bourne Supremacy” (2004), “The Bourne Ultimatum” (2007), and now “Jason Bourne” in 2016.

In Hollywood forever is usually about three or four films. After that, the “James Bond” syndrome begins to set in. Translation: the newness of the first film concept (and its conceits) gets devoured by fans who then expect the sharp, crisp, writing and plot to continue. When that doesn’t happen in the fourth film in the franchise – after all how many car chases and crashes can a film franchise endure, even if staged in Las Vegas, before boring its faithful into a state of ennui?

Having said all of this, the fourth film starring Damon delivers very little artistic new material surrounding the Jason Bourne saga. The story in short, has Bourne once again on the run from CIA hit squads as he tries to uncover hidden truths about his past.

When former CIA operative Nicky Parsons (Julia Stiles) hacks into the agency database she discovers evidence about its illegal assassination program and about Bourne’s recruitment. Now, Bourne begins to understand who he truly is. After Parson’s breach, CIA Director Robert Dewey (Tommy Lee Jones) orders CIA cyber head-hunter Heather Lee (Alicia Vikander) to find the pair. Once the nasty “Asset” (Vincent Cassel) under the secret direction of Director Dewey, is given the okay to take out Damon and Stiles, the cat and mouse game between super-villain Cassel and good guys Damon and Stiles now begins in earnest.

There is a weak subplot that involves a Silicon Valley billionaire Aaron Kallor (Riz Ahmed) as the CEO and Founder of a company called Deep Dream with ties to questionable practices between his company and the U.S. government.

Critical reception has been generally mixed. Richard Roeper of the Chicago Sun-Times gave the flick 3 and one-half stars out of a possible four. I think he was very generous. The lengthy cinematic piece de resistance segment that takes place on the Las Vegas strip is merely a demolition derby on steroids. Not a frame in this Vegas sequence has a scintilla of believability in it. The sound track delivered to the audience is slightly north of 4000 on the decibel scale along with the now famous driving and propulsive music score by John Powell, that has become the standard for chase sequences in action films. I think it’s a safe bet to say, however, that the entire movie is an assault on the eyes and ears with sound and fury signifying nothing (with apologies to Bill Shakespeare).

In all fairness, however, this latest and perhaps the last movie on the Bourne saga isn’t targeted to anyone over 40. This age demographic doesn’t give a fig as whether the story makes any sense as long as the images fly by at Warp speed. The actors and technical geniuses may be wasted in this effort that has cleverly cobbled together documentary footage of Europe on fire by protesters in the streets over the Arab spring in Egypt, the Athens Greece riots over their financial crisis and meltdown and other protesting factions located around the world.

If, however, you have some discretionary income lying about and you’re under 40 years of age, by all means partake of the Jason Bourne saga at a theatre near you. It is now in wide release. And remember, no texting to your friend sitting next to you during the movie. You might miss another one second image cut. However, I don’t think it makes any difference to the story. But I digress,