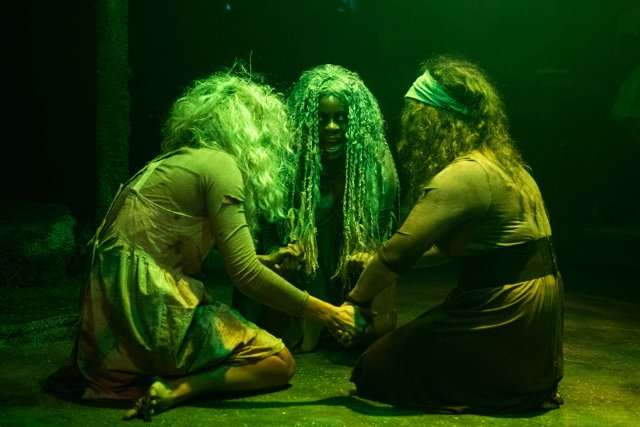 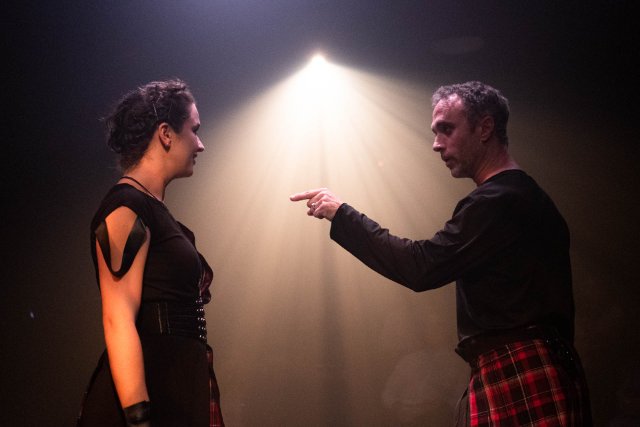 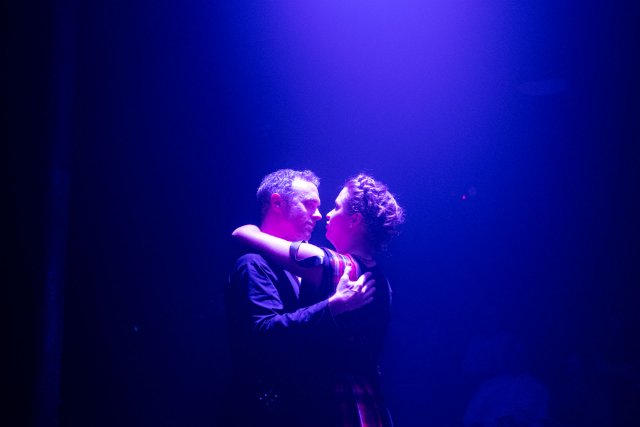 If you ask most people, they may tell you that they’ve always known their life can change-- or end – in less time than it takes an assault riffle’s bullet to reach its target. Even so, before recent years, these folks were able to keep such knowledge out of their conscious minds.

But with the recent spate of mass shootings, and seemingly no public place safe, it can be difficult not to remain obsessively vigilant. Further, it may be hard not to cringe at any strange sight or sound.

To be sure, lighting designer Conner Reagan sometimes uses stark hues for intensity, reinforcement and focus. But for the most part, the extremely intimate playing space at the Vanguard Sanctuary for the Arts remains shrouded in blackness. In addition, it helps that this black box theater is just that – black. This, along with stage fog, further reinforces this intense, riveting production’s discomfiting and claustrophobic nature.

Yes, New City Players’ production of “The Scottish Play,” running through Sept. 1, takes place “in ancient times.” But it’s hard not to understand how this creepy and unpredictable mounting reflects the fear and extreme uncertainty surrounding 2019 and the future. Like live theater in general -- and many successful productions of Shakespeare’s plays – this Macbeth mirrors the current times. For instance, the production captures a sense of existential angst and despair that modern folks might feel today. Some may sound melancholy and hopeless as they voice their “What’s the point?!” attitude, noting all that is wrong in today’s world. Meanwhile, others may sound jaded or even angry while expressing this opinion.

No question, when Trucks’ Macbeth speaks these and other words toward the play’s end, it’s clear he’s given up on life. For him, despite all the power he’s gained, life is essentially meaningless. And no, he’s in no mood for clowning around, unlike Vladimir and Estrogen from Beckett’s Waiting for Godot.

Speaking of that playwright, there’s a Beckettian quality to Ryan Maloney’s set design. The play takes place in Scotland, but seemingly in the middle of nowhere. On either side of the stage, rocks piled on top of one another are surrounded by tall branches and some shrubbery.

But if life has lost meaning for Macbeth at the end, the play’s major characters are filled with purpose mostly throughout. This is especially true for the greedy and ambitious tragic, titular character and his even-more ruthless, determined wife.

At one point, Lady Macbeth (a vivid, emotionally-intense Laura Plyler) positions herself on all fours. She leans forward, like a chained tigress or lioness determined to pounce. Furthermore, Plyler’s wide, intense, scary eyes look like daggers. And when she reprimands her husband, Plyler’s Lady Macbeth speaks in a sharp, strict, penetrating voice, leaving no doubt she’s in command.

Yet, for all her dangerous ambition, Plyler conveys the character’s humanity too early. Specifically, this “Lady” sometimes seems overcome with emotion and shock, dabbing at her eyes, for instance. This saps the character of her merciless quality, which is necessary to differentiate herself from her husband.

Speaking of the titular character, Trucks offers a multi-faceted performance that builds in intensity. From the outset, we see a restless man. But we also sense an honorable individual whose voice carries a hint of pleasantness. However, as the play progresses, that niceness is gone. Soon, a mixture of quiet menace, cunning, and thunderous intensity escapes his voice. Meanwhile, Macbeth’s eyes serve as windows to the hatred, bitterness, as well as unbending, crazed resolve and greediness in his soul. It’s easy to hate Macbeth during times like these.

But Trucks also makes us feel for this tragic figure. The actor is equally adept at conveying Macbeth’s insecurities. At times, he clearly looks like a scared, disturbed child whose mother must keep him in order. During certain scenes, Plyler’s Lady Macbeth seems like that motherly figure. However, she dishes out tough love toward her sometimes cowardly “son.”

Of course, this “Lady” is often cruel. Venom escapes Plyler’s mouth as Lady Macbeth hurls insults at her hubby. Nevertheless, it’s obvious from this production that the two share a close, loving relationship. For example, kisses between them are passionate and sensual.

By contrast, there’s no wife or “Mother” figure around when the witches, or “weird sisters” perform some type of gruesome ritual on Macbeth. He’s clearly at their mercy, lying helplessly in one of their laps. During one scene, he’s panting, almost hyperventilating in fear at these strange women. And as Rachel Finley, Courtney Posten and Jessica Schulte portray them, they seem like central characters in a horror movie by William Peter Blatty, M. Night Shyamalan or Stephen King.

The women, more like hags, maintain a dazed, crazed look. In addition, these weird beings speak in sharp, trance-like, at times mechanical voices. In fact, during one scene, one of them speaks in a guttural, low voice, bringing to mind the possessed Regan from The Exorcist.  During the scenes with the “weird sisters,” green lighting lends the proceedings a non-realistic, creepy aura.  So, too, does authentic-sounding thunder and vivid lighting effects to suggest lightning. Ditto for sound designer Ernesto Gonzalez’ foreboding, suspenseful sound effects, which carry a propulsive rhythm.

All of this reinforces an unsettling world in which otherworldly forces can predict future occurrences with pinpoint accuracy.

Strangely, Banquo’s ghost isn’t present, or at least isn't prominent. Then again, perhaps that is director Tracy Manning’s way of reinforcing Macbeth’s mental breakdown – he really is talking to an empty chair.

Speaking of the director, she’s careful to differentiate calm, orderly scenes with ones during which we essentially witness controlled chaos. This contrast can emphasize the imbalanced world into which the company viscerally draws us. That is partly due to the extremely intimate playing space. Three rows of audience members sit on either side of the stage. Literally, those in the front row must take care not to trip actors, as they brush past us within inches of our legs.

At the same time, the actors have the tough task of negotiating a confined playing space while remaining wary that audience members are so close. With such a stage configuration, some actors will inevitably block others. That happened more than once during the reviewed performance. The key is to ensure the blockage doesn’t remain for too long. And Manning proves up to the task through her adept staging. Macbeth, Shakespeare’s last great tragedy and his shortest, is undeniably pitch-black and bloody. The death toll rises as the play progresses. However, Macbeth isn’t as gruesome as the nearly unbearable Titus Andronicus, an earlier Shakespeare tragedy. Moreover, Manning is clearly not set on grossing out audience members. Scenes are not graphic.

On another note, Manning and her cast manage to milk some of the lines for comedy. For instance, after Macbeth hallucinates in a panicky state, he suddenly sits down. In a serious tone, he re-assures everyone that everything is OK. Such a sudden shift in state and tone produced a few chuckles during the reviewed performance.

But the real comic relief occurs during the drunken Porter scene. As this comic figure, Jordon Armstrong appears credibly unsteady and modulates his voice, gaining laughs in the process.

Some cast members have better facility with the Bard’s words than others. A few speak too quickly. As a result, the poetry suffers. Also, the actors could place more emphasis on some of the play’s more notable lines.

One might not confuse these talented performers with highly-trained and experienced classical-oriented actors. Nevertheless, for the most part, they not only bravely speak the Bard’s speech with conviction and credibility, but convey the meaning behind his lines. Some performers strive for a naturalistic effect, speaking in a quieter, more conversational tone. And due to the Vanguard’s intimate space, this often works.

As a whole, the production works, even without a re-imagination or unique directorial concept. Rather, this is simply a uniformly dark, sometimes creepy Macbeth, from the acting to the lighting, costumes and the vivid sound effects.

This approach taps into the current zeitgeist. Also, it helps the production serve as a cautionary tale against the vices explored in the play. These include unchecked power, greed and ambition (the latter being Macbeth’s tragic flaw).

Undeniably, like the world depicted on the relatively young, fearless and yes, ambitious New City Players' stage, we’re living during a bleak time.

It’s one in which we’re struggling to find some light.

New City Players’ production of Shakespeare’s Macbeth continues through Sept. 1 at The Vanguard Sanctuary for the Arts, 1501 S. Andrews Ave. in Ft. Lauderdale. Performances start at 8 p.m. Thursday through Saturday, as well   as 4 p.m. Sunday. There are two remaining post-show talkbacks with the cast and creative team on Sundays, Aug. 25 and Sept. 1. Tickets for all performances range from $20-$35. The theater opens an hour before curtain time and the house opens a half hour before each performance. For tickets, more information and to view a video trailer of the production, visit https://www.newcityplayers.org. You can also call (954) 376-6114 or (954) 358-3671