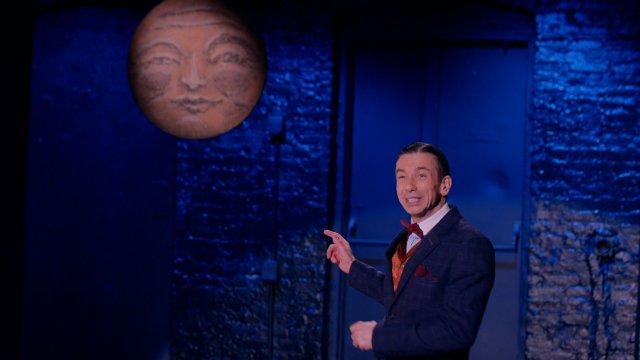 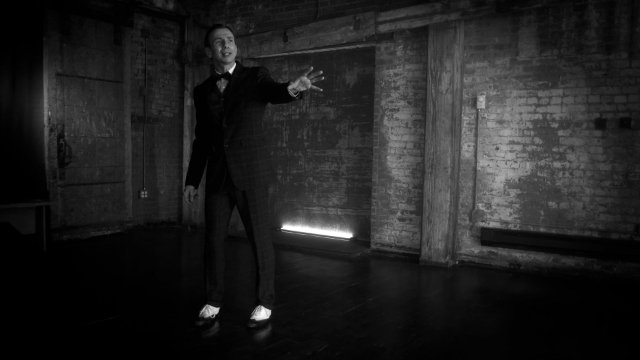 Well, George, you sure do look and sound spry yourself, considering that you’ve been dead almost 80 years. And it’s great to see you, too…especially now, as we anticipate a return to live, in-person theater.

You would probably agree if you tune in to a newly-abridged online version of Chip Deffaa’s lively, engaging one-man Off-Broadway play, George M. Cohan Tonight! Perhaps you recognize the title; the Irish Repertory Theatre (IRT) in New York City gave the piece its theatrical debut in 2006. Back then, actor Jon Peterson earned a Drama Desk Award nomination and a Drama League nomination for his performance as “the man who owned Broadway,” as many knew the legend.

Fortunately, a nimble Peterson is back portraying Cohan in this one-hour, 15 minutes of biographical musical bliss. The vigorous, abridged online production by IRT is available to stream through Aug. 29.

With that said, Deffaa employs an intriguing framing device through which he tells the tale. Specifically, in George M. Cohan Tonight!, he appears to return from the dead to tell us his true tale through song, dance, and spoken words.

“I often hop on that vaudeville train and come back to tell my story,” he tells us toward the beginning.

Speaking of the beginning, from the outset, you might think that you’re watching a Tim Burton film instead of a celebratory, upbeat musical. We hear a creepy-sounding, soft wind as Cohan, in a soft voice with wonder, speaks the show’s opening words. Curiously, we also hear what sounds like a jail cell closing shut.

The idea of Cohan returning from the dead is particularly appropriate for our times, if you think about it. Indeed, he’s returning from the grave just as live theater is coming back to life after more than a year of dormancy due to the pandemic.

Peterson, with slicked back dark hair and wide, enthusiastic, dark eyes, sports a suit with a vest, a straw hat, and holds a cane. The performer brings Cohan to vibrant life. For instance, he convincingly radiates charm and charisma as he sings and dances to familiar songs such as “Over There,” “Yankee Doodle Dandy” and “Give My Regards to Broadway.” Peterson triumphs in the role, whether he’s singing such upbeat songs or softer, somber, more contemplative numbers, such as “Life’s a Funny Proposition After All.”

To his credit, a bright-smiling Peterson makes it all look as easy as though, through song, dance, and spoken word, he were simply having a conversation with his audience in his home. The performer’s singing voice is sweet, yet strong. He hits the high notes with as much clarity as he nails the low notes. Further, Peterson doesn’t just sing. He emotes well through song. This is true whether Peterson’s Cohan is deftly conveying vulnerability or sarcasm, joy or arrogance.

Throughout the show, spoken word segues seamlessly into song, and back to spoken word. Further, Deffaa, who also directed his show, keeps the pace moving fluidly and wisely directs with variety. For example, the film crew captures some scenes in black and white, and others in color. Generally, when Cohan addresses us in the present, he does so in color. During flashbacks, we’re looking at a black-and white screen. We also hear the sound of audiences clapping.

For the purposes of the abridged film version of George M. Cohan Tonight!, a film crew captured the show on location at The 13th St. Repertory Theatre in New York City. There is little scenic design. However, we often watch Peterson next to sights such as a billboard with Cohan’s full name in lights, as well as a moon sporting a peaceful face, or, as Cohan sings, “that good old musical moon.”

Audiences new to Cohan, as well as those more familiar with him and his work, should be pleased. Among other things, we learn about Cohan’s youth, how he entered showbusiness, his love interests, his Irish heritage, and how he reached stardom. However, this musical doesn’t treat Cohan like a saint. In addition to learning about Cohan’s triumphs and good qualities, we also witness the man’s excessive pride, and learn how critics at first dismissed him as a performer.

Deffaa has arranged the songs in such a way that the musical never feels like a concert. Instead, the musical numbers help tell Cohan’s story, fitting in thematically. For instance, Cohan talks about living in New Rochelle, and the song “Forty-Five Minutes From Broadway” follows. The song’s title refers to the distance between New Rochelle and Broadway.

Cohan wrote “simply, directly, from the heart,” but he was also clever with words.

Cohan’s musicals “were as carefully constructed as the classic dramas of (the Greek playwright) Euripides,” critic George G. Nathan once said, according to this musical.

Or, to hear it in Cohan’s words, “Everything I touched turned to gold.”

Fortunately, Peterson makes Cohan likable throughout, even when he’s acting boastful. And so, at the end, when Cohan turns into a black and white shadow, disappearing into the light, we want him to come back.

George M. Cohan Tonight! is available for streaming through Aug. 29 as an Irish Repertory Theatre production. While reservations are free, IRT suggests a $25 donation for those who can afford to give. To watch a trailer, go to https://www.youtube.com/watch?v=t_n4-6WnsFc. And to make reservations, go to https://irishrep.org/shows/george-m-cohan-tonight.