The Lord of Cries by John Corigliano 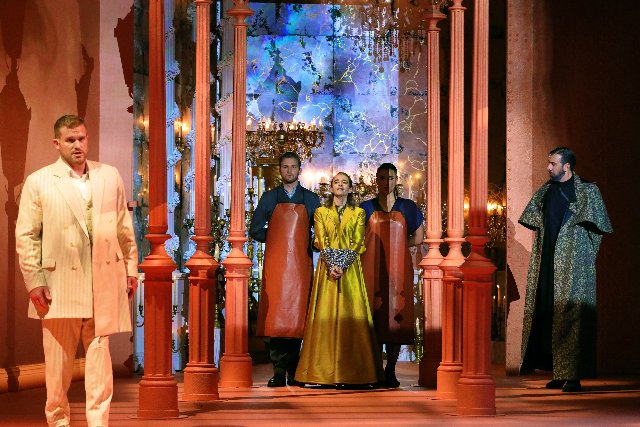 John Corigliano’s first opera “The Ghosts of Versailles” was such a daunting and unpleasant experience that he vowed never to write opera again.  That commission from the Metropolitan Opera premiered 30 years ago.  However, his life partner, opera composer Mark Adamo, persuaded him to reconsider when Adamo offered to write the libretto.  The felicitous result is “The Lord of Cries,” commissioned by Santa Fe Opera.  The company has delivered a stellar production of the exciting opera with a cast of exceptional voices.

“The Lord of Cries” is an unusual melange of two literary works written two millennia apart.  The more recent is Bram Stoker’s “Dracula,” which has been used as the basis for operas before, but none have entered the repertoire.  Adamo concludes that Stoker must have known the other contributing piece, Euripides’s “The Bacchae.”  Despite their divergent natures, the two share commonalities that are unlikely to be random.  “The Bacchae”’s Dionysus exerts religious control over Thebes.  “Dracula” antagonist Dr. John Seward exercises life control over the inmates of the Carfax Asylum as well as ownership of Carfax Abbey.  Dionysus and Dracula both use disguise and are supported by violent women – the Bacchantes for the former and the Three Odd Sisters for the latter.  Finally, in each source, a character in a crazed mental state mistakenly parades a decapitated head, not realizing it is someone dear to them.

The story of the present opera takes place in Victorian London at the fearsome time of Jack the Ripper.  In Adam Rigg’s somewhat simple scenic design, back walls are aflush in pink-orange, and the stage is studded with lampposts, reflective of the era.  Rather than traditional black, they are of the same coloration as the walls, creating a less conflicting canvas for Chrisi Karvonides-Dushenko’s varied and often distinctive costumes. Adam Larsen's projections enhance the backdrops and provide revelatory lupine shadows in the denouement.

Distinguished countertenor Anthony Roth Constanzo is Dionysus, who travels over time and space and becomes Dracul, The Count.  He intends to reclaim the glade on which stands Carfax Abbey, now under the control of Seward.  Dracul vows to punish those who do not accept his ownership over the property.  This role was written for Constanzo’s voice, and it couldn’t be a finer fit.  His range and versatility of voicings with considerable dark edge is remarkable, and he is adept in handling the androgonous nature of his characters.

As Dracul’s obstacle, Seward is obstinate.  Jerrett Ott portrays and sings Seward with equal authority.  Decisive and demanding in his public persona, he repeatedly defies demands to forfeit the property to Dracul, despite evidence of a deed of ownership that the stranger holds.  A long soliloquy reveals Seward’s insecurities and his passion for Lucy, wife of inmate and childhood friend Jonathan Harker, who has learned that Dracul is coming.  The doctor’s role also calls for great vocal range, and the baritone conveys rich tone and powerful emotion.

Vocals are demanding throughout the cast, with most artists required to be both lyrical and highly emotional, and an appropriate tremulousness occurs in the voices of several.  Kathryn Henry, a member of the Apprentice Program, was a late stand-in to take on the important role of Lucy, and her performance is indicative of how outstanding the apprentices (misnamed?) are.  She is equally adept at the mellifluous and the harshly dramatic voice in her ecstasy duet with Seward and her screaming soliloquy.  David Portillo, the tenor playing Jonathan, captures the character’s terrified mindset with high pitched howling.

A controversial element in “The Lord of Cries” is the use of a narrator, orated with gravitas by Kevin Burdette.  Many feel that telling what has happened rather than showing it weakens drama, but that is not always true.  In the Victorian era of  backstreet murders, newspapers spread the word (and the fear), so the use of a “reporter” in these circumstances works well.  And there are plenty of bristling moments in the sung portions otherwise.

Overall, the vocals are captivating without being memorable except for their shrillness.  The ominous orchestral music excites.  Rather than provide countermelody or a continuous flow of thematic musicality, the orchestra amplifies emotions with great crescendos and emphasizes the harshness with shimmering, screeching, and clacking that work well in the horror idiom.

The plot line is clever and interesting, and this is an eminently enjoyable opera.  Nonetheless, the story is somewhat convoluted and often jumps to new developments without sufficient preparation.  Major cuts would be welcomed.  The shipboard scene concerned with Dracul’s arrival in London is unnecessary.  Seward’s well-delivered introspection could be abbreviated as could a couple of two-character scenes which are also quite repetitive and slow the action.  And though a matter of taste, the gore and horror could be more accentuated to make it more chilling.