Cause of Failure at NY Fringe Festival 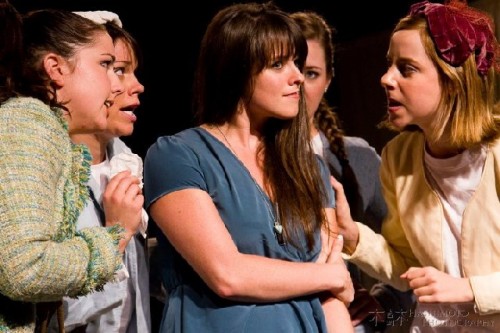 The tragic mode in the dramatic arts pits the fragile human ego, its bluster, self-absorption and complacent insertion in the daily activities of life against the brute fact of death that brings the self and its activities to an end. Death, the end of the ego’s play upon the stage of life can physically be brought about by the act of murder, suicide or illness. It is always waiting in the wings to make its entrance. Its arrival can be sudden and typically arrives at the end of the play. But sometimes it shows up early as in Albee’s” The Lady from Dubuque” and gnaws away at all the attempts of the characters to maintain normalcy as they hope that wit will suffice in delaying the painful wisdom of confronting death face to face.

There is nothing sudden in Death’s appearance in “Cause of Failure”. It makes its entrance early, embodied (or disembodied) in the mimed dance of an actress (Louiza Collins) as the damaged heart of Ann Johns (Sally Burtenshaw). Here Death is not a destroying angel intervening from above but the biological reality of a gradually failing heart, a character as important as the woman whose body it inhabits. It constantly perplexes the doctors who, at times, can prolong its life yet at other times, despite all their medical insights, can’t predict its future. As the very force we take for granted supporting our day-to-day activities, it is at the heart of the story and of the lives of the family surrounding Ann Johns. When it stutters it throws their reality into disarray.

The character whose life is most affected by the changing condition of the heart is the sensitive and self-possessed Maggie Johns (Lauren Weinberg), the daughter of Ann. She is still a little girl when the condition is first diagnosed and in her early twenties when her mother finally succumbs to the disease. In a sense she is competing with the heart for the center of attention in the family. She radiates the effervescence of youth ready to take life on. An aspiring writer, she is forced to attend a local community college to be close to her mother. Singled out by her teacher for her obvious talent, she wins and accepts a scholarship to study writing in England, with the inevitable guilt of not being there for her mother. Life has become routine for Ann, divorced, working to hold the family together and her activities seriously proscribed by the illness.

Providing a perfect Thanksgiving each year is a source of pride to Ann. With the background of her illness it becomes heart wrenching to see her show off her perfect technique for carving the turkey. This tension between youth still trying to be born and adulthood trying to just survive is exquisitely portrayed in Maggie’s monologues. They are the self-conscious heart of the play in struggle with the blind biological trope of the mother’s heart, which is threatening to take down not just Ann but everyone around it. As the disease progresses more and more people are engaged in the care of Ann.

It provides an opportunity for the playwright, Megan Weaver to create wonderful panoply of stock characters: The chorus (Katelyn Collins, Eve Marie Mugar, Maggie Raymond and Emily Rupp) assumes different roles, the most memorable being the church ladies who overstate their importance in their care of Ann. A home care nurse, with an exaggerated notion of her genius for caring for the sick steals the show in a campy performance by Sam Givens, based on Cruella de Ville. The brother (Kevin Bunge) of Maggie tries his best to take over from Maggie while she is in Europe but can’t keep the meds straight. The officious Doctor (Lauren Hennessy) misdiagnoses the illness early on and can’t quite pin down the prognoses until the end of the play when the inevitable presents itself.

The play jumps from straightforward dramatic dialogue to dream sequences where the metaphors of the heart play themselves out. One of the most memorable being the dance between the Heart, the Doctor and Ann where the ambiguities of the heart as medical reality and as Ann’s dying heart, are thoughtfully explored. The play is based on Megan Weaver’s own life story. Her ability to capture the warp and woof of the net that a slow death casts on the life of a family and community is insightful and deep. One can only imagine what power this play would have in a more professional setting with the props and lighting of a full-fledged production.