Mozart at his Most Sublime 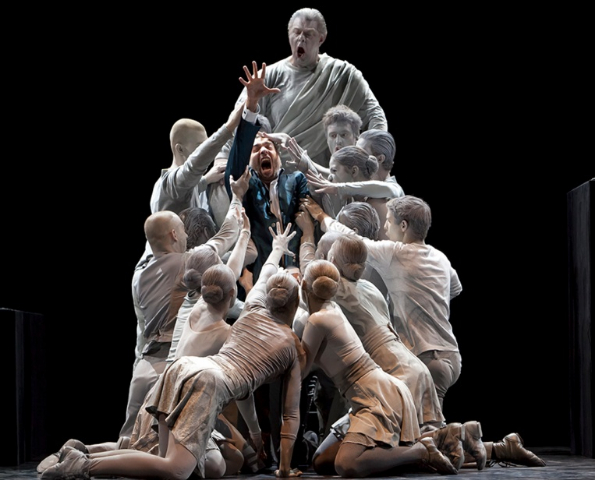 Ivan Fischer, the great Hungarian conductor, returns to Mozart's original version of Don Giovanni. Putting on a production from the Don's point of view, everything is a body. Furniture, peasants, chorus all are wearing white body suits and often strike arresting poses. This concept invites us to listen more closely to the terrific Budapest Festival Orchestra and the singers. It also brings forward the relationships between principal characters, who are set off in 3-D against the white-figured background.

The two blocks on stage, and the slightly raised platform on which they sit, provide perches for the acting singers, sometimes to sit on, at others to stand. Like the occasionally grouped bodies, the boxes can provide convenient hiding places.

Maybe we could have taken the lessons of Tristan and Iseult productions more deeply to heart earlier. The Willy Decker concept for La Traviata gave much pleasure to people who love that opera. A spare set, blossoming in Act II, but then returning to simplicity, brought the singing, the music and the acting front and foreword where they deserve to be. Tristan is often produced with a simply raked stage, lighting and a few props. Six hours of absolutely glorious music to sink into without distraction.  Fischer gives us such a set for his Don Giovanni, pared down with a radical change of perspective.

Before the curtain doesn’t rise (there is none) we see a troupe of actors dressed in tight, white body suits motionless in poses across the stage. We usually look at this opera from our point of view, the Don as cad, a criminal or both. Our moral compasses should be activated.

Fischer asks: What does the world look like if you are Don? Bodies, bodies everywhere and everyone to drink. They are mimes, they are chorus. They are seats to sit on. Together they can form a rectangular window or a wall. When they are a group of peasants, Zerlina blends in with them, although she gets to sing her own arias. Sylvia Schwartz is delightful in the role,

Standing out most boldly from the crowd is Donna Elvira in bright red. From the moment we first heard her six years ago at the Lyric Opera of Chicago in Peter Sellars’ Hercules, Lucy Crowe has captured our attention. Here, her lyric loveliness is used with both passion and yearning. Fury at betrayal consistently trumps good sense. She has fallen for a cad.

Christopher Maltman as Don Giovanni and Kristinn Sigmundsson as Il Commnedatore, reprised roles we had seen them create in a delightful production under the baton of James Conlon at the Ravinia Festival.

Now the Commendatore, after he dies, becomes another white body, albeit a very large one with a great bass voice.

The Don is a signature role for Maltman, who not only has just the right voice, but a delightfully sinister and comic presence. It is not that you like him any more, but it is easy to see why women find him attractive.

Maltman uses many hand gestures, among them splayed fingers raised and a closed-fingered wave.   This makes it easier for his servant/sidekick Leporello to imitate him when he is disguised as the Don. Curiously, the gestures are very like the left hand of Ivan Fischer conducting.

Fischer is raised slightly in the pit and a spot shines on him. At the rear of the theater, there are no video screens of the conductor for the cast to consult. All attention is focused on the conductor. Both orchestra and cast follow his cues to a tee. This made the evening especially satisfying.

Thankless roles include Donna Anna, who is priggish and overly concerned with the punishment of her father’s murderer. Laura Aiken has a rich soprano and interacts in a cool appreciation with Don Ottavio, who is in love with her.

Fischer has returned to the first version of the opera, the Prague version, so Don Ottavio's first act aria is missing. Our wait for “Il Mio Tesoro” in the second Act is rewarded by Zolan Megyesi, who sings with a tender beauty.

Just how juicy the acting is jumps up in Leporello, jealous of the Don'ts priapal powers, but pricked also by conscience.  Jose Fardilha gleams with guilt.  Matteo Peirone as Masetto attempts to defend his future wife, and yet his lower class position makes him a reluctant pawn of the Don's.

The highly successful coordination between music and theatre is what Fischer strives to achieve. In addition to giving us visual diversion and surprise, he places part of the orchestra on stage twice and further integrates the elements of his staging.

This remarkable production of Don Giovanni concludes Mostly Mozart for this season. Like listening to any of the work of the composer, you wish the Festival would go on forever.