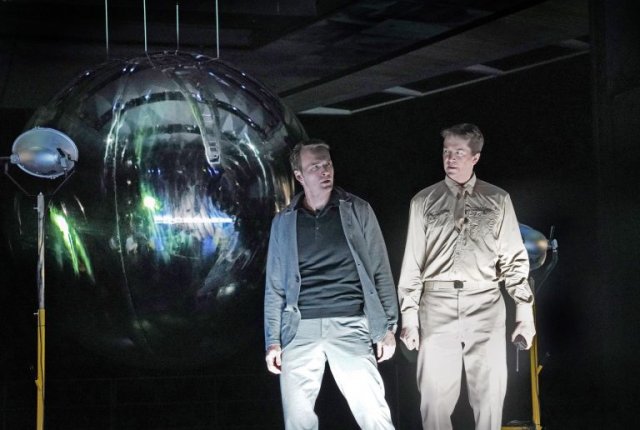 The Santa Fe Opera House is the perfect venue to stage John Adams’s compelling contemporary opera Doctor Atomic, about the creation of the atomic bomb. With a riveting and intellectual, but sometimes obtuse, libretto by Peter Sellars that is largely taken from historic documents, a story whose outcome we know is still tense and absorbing. It is a story, a single event, that forever changed the world. Santa Fe Opera’s striking and memorable artistry match the stellar material.

The primary locale of the action, Los Alamos, New Mexico, is practically visible through the stage’s open rear wall, and the stunning scenery of the area envelopes the opera goer as it would have the scientists who created the bomb. Sometimes loud thunderstorms and lightening visible through the radically open opera house add appropriate drama to the proceedings. Not only did the events of this profound moment in history unfold on this high mountain desert, but the moral discussion about the project retains special resonance here. Health consequences of the first atomic testing in this state, near Alamogordo, remain.

Doctor Atomic is J. Robert Oppenheimer, director of the supersecretive Manhattan Project to develop the atomic bomb. The libretto and music center on the clock-ticking tension leading to the test and on the personalities associated with accomplishing it.

With estimable skill, Ryan McKinny portrays Oppie, as the title character is called. A physicist of the highest order, his task is to manage a clutch of other top scientists. McKinney wears Oppie’s ambivalence well, slightly stooped as if with the weight of the world on his shoulders and constantly having to contend with clashes between scientists and the government.

Physicists Edward Teller and Robert Wilson lead a group of scientists in the project who have serious moral reservations about its procedures and objectives. Since Germany has surrendered and no longer poses a threat to build its own nuclear weapon, should we continue? If we produce it, should a demonstration to the Japanese be enough to get them to surrender? Oppie attempts to field the concerns, but gains no respite with his colleagues or at home. His intellectually powerful wife Kitty, the Tewa tribe housekeeper, and his infant child provide constant reminders of the cost to humanity and the future jeoparadized by the project. Kitty hauntingly beseeches Oppie to remember that “The world is not made up of atoms. It is made up of stories.”

At Oppie’s other flank is General Leslie Groves played convincingly with implacable insistence by Daniel Okulitch. Groves is driven without compromise to suppress dissent and to test the bomb at whatever risk. What is so chilling is that Groves demands that they go forth with the test in the face of adverse weather conditions that could produce a catastrophe. Meanwhile, the scientists have grave concerns that the explosion could set off a chain reaction that could destroy all of civilization.

The brilliant Peter Sellars directs this production of an opera, still organic and evolving thirteen years after its premiere. He makes apt and striking, yet not totally theatrical, additions to this production. Before and during the performance, three pueblo tribes perform a Corn Dance, fundamentally a call for rain. In this case, the dancers represent the indigenous peoples who have suffered by the intrusion on their lands and all of the lies and bad decisions of white men. A silent group of “downwinders,” those who lived near the test explosion and claim adverse health consequences from fallout, also grace the stage. And interspersed throughout the opera, four dancers interpret events. Clad in Buddhist orange and maroon colors, they reflect both our conscience and the society that was destroyed by the atom bombs.

The fixed set is comprised of one element, a giant chrome orb that dominates the stage. Not only does it convey the shape of the atom about to be split, but its ominous presence looms over our very existence. Otherwise, the on-stage artistic elements are dominated by performers. But this being Santa Fe, threatening light is flashed on walls and baffles outside of the house and rumbling surround sound abounds – just in case there is no timely thunder and lightening from nature.

Adams’s music is in the modern/post-modern vein, very listenable, with the orchestra taking a back seat to the message-heavy singers. The large heaping of percussion serves the libretto well as it marches toward possible Armageddon. However, the composer’s commitment to electronic sound extends to the voice, which is a disappointment. As an artistic endeavor, acoustic opera singing has represented the apex of human vocalization since the music form originated. With amplification, any lounge singer who can carry a tune can stand on Adams’s opera stage. How can one really evaluate and appreciate an opera singer whose voice is miked?

Doctor Atomic addresses moral dilemmas of the greatest consequence in captivating manner. Despite its bloated length, incompatible with contemporary taste, and misgivings about amplification, it definitely merits a place in the modern operatic repertoire.

Doctor Atomic an opera composed by John Adams with libretto by Peter Sellars, was produced by Santa Fe Opera and played at its opera house at 301 Opera Drive, Santa Fe, NM, through its 2018 summer season.