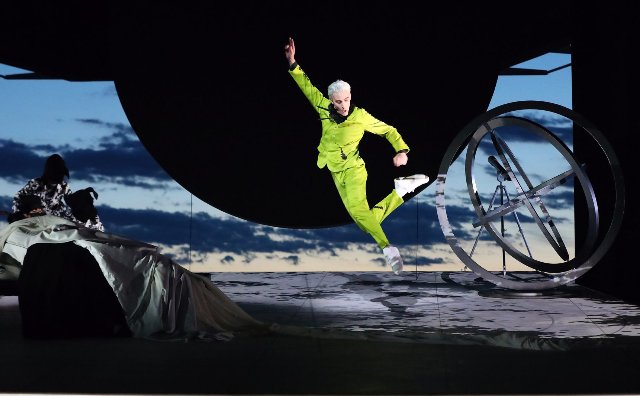 William Shakespeare has served as inspiration to myriad artistic accomplishments.  His plays act as the basis for numerous operas, most notably those of Shakespeare admirer Giuseppe Verdi who composed “Otello,” “Falstaff,” and “Macbeth.”  Other successes include Gounod’s “Romeo and Juliet” and Thomas’s “Hamlet.”  But unique in the canon is Benjamin Britten’s “A Midsummer Night’s Dream.”  Although the play is condensed by half and otherwise edited, this opera is the only one that is in the repertoire and preserves the Bard’s own words in his own language.  Santa Fe Opera acquits itself well with a delightful rendition of this complex, overstuffed, but eternally charming literary masterpiece set to opera.  A lion’s share of credit for its success goes to auteur Netia Jones, who not only directs, but designs scenery, projections, and costumes.

Shakespeare’s frequent conceits include mistaken identities, confused love matches, supernatural interventions, play-within-a-play, and multiple plot lines, but “A Midsummer Night’s Dream” embraces them all, and more.  Several  threads are interspersed and overlapping throughout the play and opera’s narrative that may cause confusion to the uninitiated.

Britten’s music is in the modern idiom without a hummable aria to be found, but it is very listenable.  Given the various threads of the story, he assigns different instrumentations and styles to each.  The craftsmen are introduced with the earthiness of low trombone slurs and boomps.  The fairie royals  awaken to low strings moaning, but otherwise, the fairie world is one of high pitched pizzacatos largely delivered on period instruments such as the celeste and glockenspiel as well as percussion.

The story takes place in the Athenian forest.  The role of the forest is portrayed by a single fake tree, growing out of a grand piano – of course!  But because of the Santa Fe Opera House’s unique ability to drop the back wall to reveal the beautiful New Mexico mesas behind, a real woods is viewed early in the opera.  The largely black and white set is simple, but the use of it is complex.  Several trap doors are employed to various effects; artists make their entrances rising up from below and behind the stage; and active projections cover a large “obsidian disk” and the stage floor.

For those who vaguely remember their high school reading of the play, the emphasis of the craftsmen’s rehearsal and performance of the play-within-the-play may surprise.  In this production, that is quite fortunate, because one of the highlight roles goes to Bottom, and bass-baritone Nicholas Brownlee clearly stands out in a large and high quality cast.  His voice exudes both power and warm resonance.  Plus, he acquits himself agreeably as an actor with his self-serving bumptiousness, as he even demands to act both Pyramus and Thisby in the craftsmen’s drama.  In the comic elements, SFO favorite, the versatile Kevin Burdette as Quince displays burlesque-like chops that prompt some of the biggest laughs.  Yet, except for the Romeo-and-Juliet-like death scene (played for laughs!) which signifies that true love never runs smooth (!), this whole diversion does not connect well to the overall exposition.

The motivation of the fairies’s narrative is a marital spat.  Their Queen Tytania is performed by Erin Morley, whose voice sounded cloaked at the beginning, but who then delivered nicely on the high notes and the coloratura passages.  King Oberon is Iestyn Davies who conquers the challenging countertenor voicing. Oberon enlists Puck to secure a magical flower juice that will induce Tytania to love him again.  However, Puck botches his assignment, and she awakens from the potion to face Bottom as a donkey (or ass – get it?) rather than Oberon, so her love is humorously misdirected.

Choreographer Reed Luplau plays the non-singing Puck, and is the second stand out. Bedecked in an eye-catching lime green outfit, he slithers on the ground and often drops from the tree, when the audience doesn’t even know he’s there.  It’s magic!   The love potion he administers is represented as blotches of India ink.  Luplau’s dancers, who also slither in reptilian fashion, and pop in and out of manholes like prairie dogs, wear striking costumes of ice white covered with black blotches that add to the black and white color theme.  The dancers’ black face masks fit the costumery completely.  They also act as a reminder of the raging pandemic with the new delta variant that induces their use by non-principals in the company.

With mention of the pandemic, this is as good a time as any to commend the Santa Fe Opera for offering this wonderful summer season to a socially distanced audience, which appears to be at its restricted capacity.  Thanks to the audience as well for the seemingly total compliance of masking requirements within the gates of the House and during the performances.

Finally, onto perhaps the central and most remembered plot line concerning four young lovers. They are all performed by apprentices - sopranos Teresa Perotta and Adanya Dunn, tenor Duke Kim, and baritone Michael J. Hawk.  Each sings admirably, and their voices meld beautifully in their lyrics-challenged, but musically pretty quartet.  The latter three are wonderfully lyrical, but Perotta’s dramatic voice as the scorned, yet caring and forgiving Helena is the most memorable.

Hermia’s father insists that she marry Demitrius, but she loves Lysander, who she runs away with.  Helena, loved by neither man, becomes a magnet to both when Puck again errs in administering the love potion.  But all is eventually righted, and to borrow from the title of another Shakespeare comedy – “all’s well that ends well.”