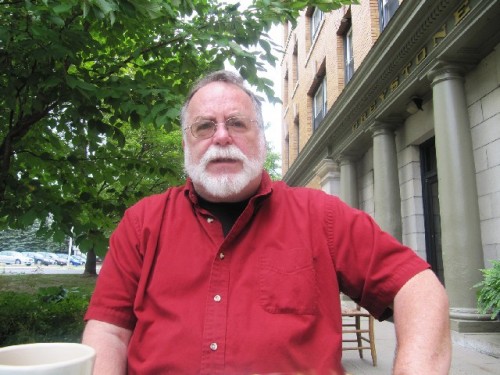 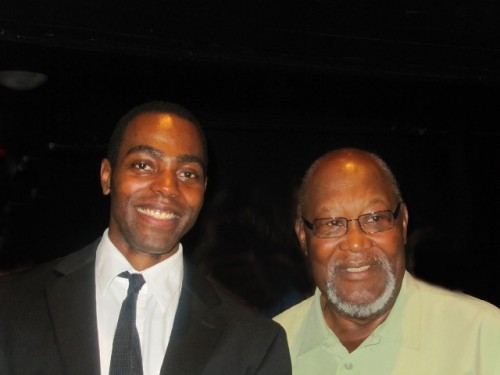 Clifton Duncan with Bill Riddick whom he portrays in The Best of Enemies. 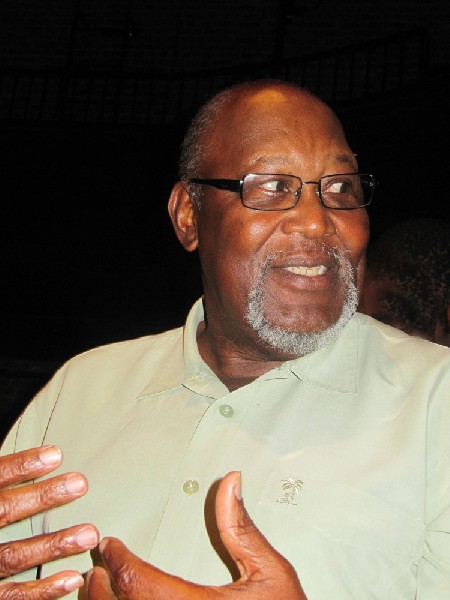 As a young man Bill Riddick was sent by the Department of Education to oversee the integration of public schools in Durham.

What does it take for the playwright Mark St. Germain to get into the heads of explosive combatants the black activist, Ann Atwater, going head to head with the Klansman. C. P. Ellis. Or to put a screed of racial slurs into the mouth of a young black mediator, Bill Riddick, sent by the federal Department of Education to bring about the integration of schools in Durham in 1971.

It is the topic of St. Germain's play, The Best of Enemies which returns to Barrington Stage for its second run from October 5 to 16.

If it is challenging and emotionally taxing to get into that complex mindset to write accurate dialogue, at the end of the work day, what does it take to leave the characters behind? Is there collateral damage involved in dealing with the topic of racism?

Charles Giuliano In The Best of Enemies there is a scene when Clifton Duncan as Bill Riddick, from the federal Department of Education is mediating between the activist, Ann Atwater, and the Klansman, C. P. Ellis. They are hurling racial insults at each other. He interjects with a screed of hateful terms for both blacks and whites. What about that?

Mark St. Germain At the beginning for everybody the play was very delicate. Everybody was super sensitive about a lot of the language in the play. I know this is not John Bedford Lloyd.

CG Even excerpting the speech and quoting it in the review was problematic. I wondered would I be in trouble for that?

MSG We tried to be as offensive as possible. We tried to thrown them all out. (racial slurs) Actually the cast became involved with it. Maybe it was half as long as that in the beginning. Then Clifton got into a roll with it. So it became, all right, what is the most insulting thing we can say about blacks and whites. There were contributions and then I had to go digging.

CG How does that work within the play? They are familiar words in common usage. They are used in anger, jokes and anecdotes. The words are not surprising although some I have never heard.

MSG It was a stretch to find enough.

CG As a member of the audience hearing this how do we react? It is shocking but we don’t want to be a part of a knee jerk reaction. What’s the point? Why are we hearing this? How does it work? How is it advancing the story line? Is it gratuitous?

MSG Honestly, in my own experience, I grew up in a town that did not have a single black face. Some of the people who were around me would use these words. It offended me terribly. It wasn’t just this. Jews. We know the words.

CG Every culture has words for the other.

MSG Absolutely. That’s what I tried to say in that section where Mary says skin color is just the beginning. In this that was not the point. This is where it is really strange to watch an audience. The audience laughs at that. They applaud him (Clifton Duncan). Because it’s an acting feat and he gets through it. I think they applaud out of being kind of uncomfortable. Yet amused by the way he does it.

CG It is not meant to be a comedic moment.

MSG It is meant to have the audience laugh, be uncomfortable, and then realize this is never going to end.

CG What are the emotional bookends as a white author when creating dialogue for black characters and the spewing racism of a Klansman. How do you walk that line? One would think that puts you on the spot. That’s a tough position to be in. If you were an African American writer there is a different vantage point. We saw David Mamet’s Race (2009) on Broadway. How does this work? Where are the boundaries?

MSG I don’t want to be limited. If I thought that way I couldn’t write a female character. Because I’m not a female. You try, and it certainly could fail, to put yourself into the heads of both characters. For me, for a play to work both sides have to believe they’re totally right. You have to believe when you put yourself into their heads they’re totally right.

CG I’m thinking of the controversy  surrounding “The Confessions of Nat Turner,” (the 1967 Pulitzer Prize-winning novel by writer William Styron)

What happens when you take historical materials and turn them into literature and theatre? How does a 20th century white author create accurate dialogue for a 19th century African American character? Which was the criticism that Styron encountered. Does that expose you to criticism?

MSG No. I’m surprised that nobody has said this except you. You’re right. It does open you up.

CG Is it ok to probe these questions?

MSG No. As a writer you can probe anything you want. But if you only write about what you know I would only write plays about growing up in New Jersey. To me what I love about the plays is that you learn things through them. You put yourself in situations you wouldn’t be in. People’s heads that you wouldn’t be in. Why would they behave that way? Why would C. P. Ellis do what he did? That was a real occurrence.

MSG It’s not pretty I’ll tell you. To get into C.P.’s head you almost had to start by imagining who he was as a kid. He had a father who was a fall down drunk. The only sense of identity that the father had was as a Klan member.

CG That fraternal aspect came out in the play when C.P. quits the Klan and is shunned by the community. There seemed to be two things functioning the racism and the fraternal bonding. How do you get into an ugly dark place?

MSG To him it’s not ugly and dark. You have to think as he would think. This is someone who is trying to protect his children. He is trying to protect his world. Against this onslaught of black America which he sees as a threat. Because he’s insecure and he’s poor. He wants somebody to feel superior to. It’s not pretty. I did a musical once called Jack’s Holiday. It was a story about Jack the Ripper and that was the most uncomfortable thing I’ve ever done.

(Ben Brantley, on March 6, 1995 wrote in the New York Times  “…The ingenious notion behind ‘Jack's Holiday,’ the frustratingly unfulfilled new musical by Mark St. Germain and Randy Courts at Playwrights Horizons, has been to bring the Ripper to Manhattan, where a criminal really has to work to hold the spotlight. Confronted with a tough, jaded new audience and a police inspector as hungry for publicity as he is, poor Jack (Allen Fitzpatrick) is finally forced to complain, "How can it be that this city is a monster worse than me?

“This sort of sympathy for the devil can make gripping, if unlikely, musical theater. Think of Stephen Sondheim's ‘Sweeney Todd,’ a show that has obviously inspired the creators of this one. But ‘Jack's Holiday’ too often seems trapped between the demands of a conventional book musical and its self-consciously important themes.”

CG Then the question is how do you get out? It’s the end of the day and time for dinner. What do you say to your wife?

MSG My wife is very smart. She’s a teacher and educational evaluator. I try to work from 9 to 5. She will call up at 4:30 and say, she used to, now I’m used to it “Stop working and come back to this world. I don’t want to have you wandering around thinking when I come home.” And she’s right. It does take time to get out. And it takes a couple of hours to get in. If somebody calls you it will disrupt your whole train of thoughts. You really have to sink into it.

CG I can relate to that. After we attend an event, up to five a week during the season, it is challenging the next day to focus and write reviews. It’s an intense process to get into the head of what you saw the night before. So I can relate to what you are describing. You have to get so deeply into it that there is also the issues of functioning in the world.

MSG I’m not so sure about how I function in the world. Maggie says to people “He’s not very good at life.” In a lot of ways she’s right. I tend to ignore things I shouldn’t sometimes.

Review of The Best of Enemies