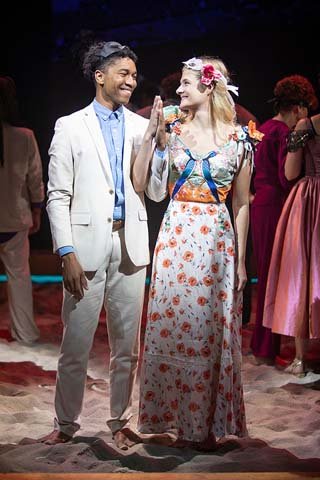 There have been many love stories written about the redemptive power of love in all its art forms: poems, songs, odes, sonnets, essays, novels, movies, and stage plays over the centuries. Be it the 2500-year-old Greek theatre with its ancient plays and their paean’s to love and war– or the plays of Shakespeare centuries later – each in its own way has impacted societies no matter the culture or the language.

When it comes to the English speaking theatre, however, no one has written more eloquently or with the beauty and the transformative power of our language over the last 400 years than the Bard of Avon, William Shakespeare. He was a prodigious playwriting genius, actor, and storyteller.  His magnum opus tribute to love; the tragic and cautionary tale “Romeo and Juliet,” is often referred to as the greatest love story ever written.

Barry Edelstein, the Old Globe Theatre’s Erna Finci Viterbi Artistic Director, is not only a recognized scholar of the Shakespearean canon, He’s also the author of “Thinking Shakespeare” a book that has become the standard text on American Shakespeare Acting in universities and academies across America.   Who better, then, than Edelstein to direct the Bard’s famous and tragic story of star crossed lovers, “Romeo and Juliet,” now on stage, under the stars, at the Old Globes’ Lowell Davies Festival Theatre.

When a story is so well known it becomes a challenge to the performers when they reinvigorate Shakespeare’s core story; yet embrace Edelstein’s reimagining and version of accommodating the increasingly popular theatrical convention of gender-bending casting where women play male characters with dialogue originally written for men.

Kate Burton, quickly comes to mind with her successful portrayal in the “Tempest” as Prospera, at the Old Globe a couple of seasons back.  And who can deny the power of the fantastic Broadway performance delivered this season by the great Glenda Jackson as she became “King Lear,” in a performance that will be discussed for years.

Remember, in Shakespeare’s time, all the characters were played by men.  It was the law in 1600 England.  But we’re now in the 21st century in America.  Theatre is an evolving art form with concepts and ideas that still honor the human condition, but just view life through different societal lenses.   Regardless of how one feels about this new approach in presenting gender-bending casts, and to Shakespeare productions, in particular, I believe there is enough room within our theatrical landscape to accommodate everyone’s production visions… and it’s no longer against the law in doing so.

That having been said brings us to the production in question: “Romeo and Juliet”; masterfully and seamlessly staged in modern-day dress by director Edelstein that boasts a huge cast of twenty-three talented performers.  Thanks to a spacious set design by Takeshi Kata, the stage features a wall-to-wall projection of Verona, plus a very large eye-catching performing space – center stage – filled with sand that is used as dance space, sword fight action, the Capulet family crypt,  and other key locations.

For those who have been living in a cave over the last 500 hundred years, the story centers around Verona’s two leading families: The Capulet’s and the Montague’s. They have been feuding for ages, and whenever they meet, violence breaks out.  But when Romeo Montague catches a glimpse of Juliet Capulet across a crowded dance floor one evening, something different happens. Eros’ arrow flies from the eyes of Romeo to the heart of Juliet setting in motion events that will become a tale of love that will reverberate for centuries.

Life expectancy in Verona, Italy, and Europe was roughly 40 to 50 years of age in the 16th century. This accounts for the young ages of Romeo (16) and Juliet (15 approaching 16). Human emotions, however, haven’t changed much over the centuries.

Director Edelstein in bringing his vision to the Globe stage wisely injects his whimsical side into the Act One, stage proceedings of its two acts and rightly so.  In Act One, there are enough anachronisms to signal that this production is not your grandfathers’ version, and when Juliet breaks into Barry Manilow’s song and dance number “Copacabana”, tensions are met with laughter, and a sprinkling of applause from the audience who “got the departure from the traditional court dancing scene (yes, there is musical underscoring in some of the scenes). Talk about a fresh approach to a revered story. That’s why Edelstein is considered one the most creative of theatre artistic directors in America today.

In Act Two, however, all is traditional Shakespeare In its execution.  Purists, need not worry.  None of the urgency, potency, and poignancy is missing, and finely judged performances abound in this impressively staged production.

Aaron Clifton Moten stars as a gentle and passionate Romeo.  Louisa Jacobson is a scene-stealing Juliet who is hard to resist. Her range runs the gamut from giddy youthfulness to a determined and committed young adult.  All her scenes in the second act have the ring of authenticity of youth and its impetuousness.  Both actors bring many professional credits to their appealing performances as the star crossed lovers that resonate with the audience.

Candy Buckley as the Nurse, shines as both caregiver and confidant of Juliet in a nicely nuanced performance. Ben Chase, as Mercutio, delivers a finely-tuned ‘best buddy of Romeo’ in a light comedic portrayal. Mercutio’s opposite number, a bullying Tybalt, is played by a taunting Yadira Correa that reinforces the deep hatred that fuels, once more, the division between the two rival families.

‘”Romeo and Juliet” is a splendid production that performs in The Old Globe Theatre complex in San Diego’s Balboa Park at the Lowell Davies Festival Outdoor Theatre and runs through September 15, 2019. It’s a great way to spend an evening under the stars.