By Poul Ruders with Libretto by Becky and David Starobin 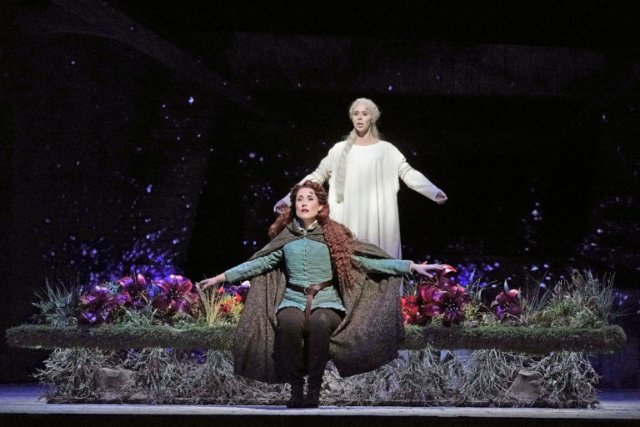 In an age of sweeping movement toward gender equity, Danish composer Poul Ruders has surprisingly drawn on a Grimm fairytale as a source for female heroics and female enabling. The result is a fable for adults – a taut and riveting opera, yet one that begs for more. Santa Fe Opera’s world premiere of The Thirteenth Child offers stunning production values that enhance the score and yield an engaging musical drama.

Although the opera is inspired by Grimm’s Twelve Brothers, the slim vignette required considerable fleshing out just to reach the 80 minute performance mark. Librettists Becky and David Starobin jiggered the plot, by adding and deleting characters. The newly manufactured villain Drokan, a main character instrumental to the central intrigue, flows uniquely from their pens.

The central plot trigger is that Queen Gertrude has “given” King Hjarne 12 sons and is again pregnant. Hjarne announces that he will have the boys killed, but if the thirteenth child is a girl, she will not only be spared, but she will inherit the kingdom. The girl, Lyra, is born, and Gertrude spirits the boys to safety. Ultimately, Lyra is exiled as well. On her return, she learns that she has 12 brothers and sets out to find and restore them to their home and station. But in anticipation of likely obstacles, Gertrude verbalizes a theme of the opera, that with the best of intent, we often cause pain in the ones we love.

Ruder’s musical palette is eclectic, unbound by idiom. Although largely edgy postmodern, the music is appealing, and orchestral passages bear a romantic era quality. He makes full use of the orchestra with various configurations and use of instruments, including rumbling drums and bells with gamelan-like motifs to represent forest sounds. While he does not emphasize melody, he uses a number of attractive phrases throughout. The overall sound is compelling, and well managed by conductor Paul Daniel. With the exception of a comic section of several minutes, the overall ambiance is dark. Appropriately, the tessitura is very low.

If anything, the libretto is too tight with narrative leaps in the storyline and insufficient threats to the title character. But it is rich in powerful imagery and emotion. Short sentences in the dialogue seem part prose, part poetry, and the terse language dictates the length and meter of the musical phrases. While the composer identified the source material as the basis for the narrative, in an unusual decision, he turned the development of the opera’s book over to the librettists to elaborate. Thus, the musical score largely fits to the language rather than vice versa. This seems odd given that the composer is established with four previous operas, while this is the Starobin’s maiden attempt at a libretto. However, there is considerable trust among the parties as they have had close and multidimensional relationships for over three decades.

Casting is excellent. Soprano Jessica E. Jones portrays Lyra with grace, confidence, and a fine voice, though her singing part itself lacks the dynamism and demands that are expected in a heroic figure. Esteemed mezzo Tamara Mumford as Gertrude commands the stage and her lower range with great authority, especially in the highly affecting lamentation scene with Lyra in which Gertrude tells the daughter that she has 12 brothers and instructs her to find them and heal the family wounds. Her quest would yield both joy and sorrow.

Perhaps the most challenging vocals are given to King Hjarne, and the talented young bass, David Leigh, plays the role effectively. He is asked to plumb the depths of the bass range, and though he understandably loses power at the bottom, he does remain audible. More daringly, he must make vocal leaps from deep in his range into bass falsetto! This device is not employed simply for virtuosity, but reflects the king’s deep-seated paranoia, especially about his concern of being overthrown by his sons, expressed in his aria “I know not what is true.” Similar, but less extreme characteristics occur in the baritone role of the malevolent Drokan, played in dark hues by an also worthy Bradley Garvin.

Director Darko Tresnjak harnesses a creative team that gives a fable-like quality to the production. Most notable is Alexander Dodge’s massive set, a castle, which is actually on its side, reflecting the instability of the kingdom. Prop highlights, such as symbolic blood red lilies, contrast sharply with the dull gray of the castle walls and stairs. York Kennedy’s lighting and Aaron Rhynes’ striking, set-covering projections add visual depth, while costume designer Rita Ryack uses swaths of color in the attires of various large ensembles to add dimension and meaning.

This premiere opera offers rewards as is, but better narrative linkage; vocal enrichment of the title character’s role; along with substantial tests of her mettle would make it more fulfilling and more a victory for the women of our time.

The Thirteenth Child, composed by Poul Ruders with libretto by Becky and David Starobin, is a world premiere production by Santa Fe Opera and plays at their opera house at 301 Opera Drive, Santa Fe, NM through August 21, 2019.