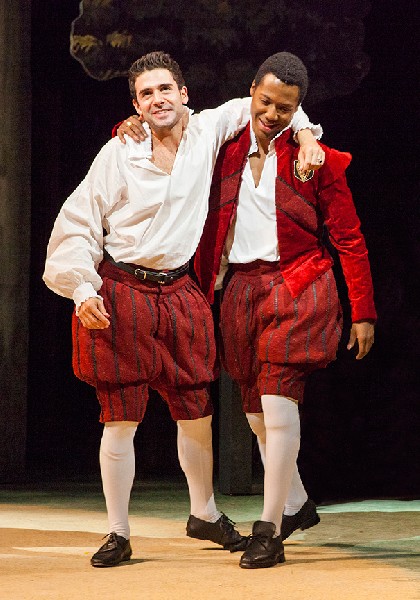 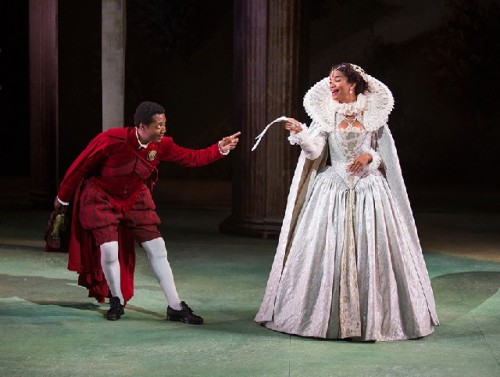 From left. Adam Kantor as Proteus and Hubert Point-Du Jour as Valentine ~Photo by Jim Cox 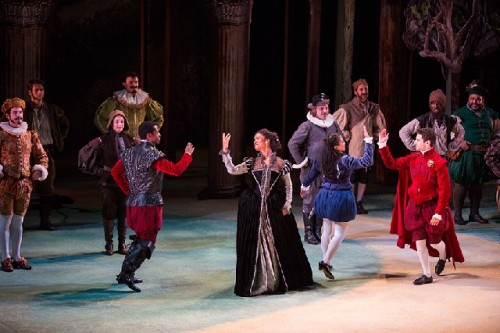 Foreground from the left. Hubert Point-Du Jour as Valentine, Britney Coleman as Silvia, Kristin Villanueva as Julia, and Adam Kantor as Proteus with the cast of Shakespeareâ€™s The Two Gentlemen of Verona ~Photo by Jim Cox

If you haven’t seen a production of the Old Globe’s Summer Shakespeare Outdoor Theatre Festival this year you still have time to catch “Two Gentlemen of Verona” in the Lowell Davies Outdoor Theatre in Balboa Park.

Whether Shakespeare is writing stories about comedy, drama or tragedy, the subject of love is never far away.   It’s the universal engine that stokes the fires of romance which acts as a powerful elixir and a necessary component in all Shakespearean plays.

The play is considered to be among Shakespeare’s earliest efforts in playwriting, and features themes of male friendship and bonding, both fidelity (on the part of the ladies), and almost infidelity (on the male side), cross-dressing, a touch of bawdiness, and of course true love.  It’s Shakespeare’s version of a coming-of-age tale between two friends and the women they love.

The story revolves around two young men Proteus (Adam Kantor) and Valentine (Hubert Point-Du Jour) who are boyhood best friends. Thanks to the energetic twenty-three member company ensemble, we see them in their various classes performing fencing, physical training, dancing, and doing the things that gentlemen of that time did to prepare for life’s adventures.  When the time comes for them to venture out from Verona into the big city of Milan to make their fortunes, decisions have to be made.

Valentine wants Proteus to join him on the way to Milan. Proteus, however, has a different plan.  He’s in love with Julia (Kristin Villanueva) and wants to remain close to her in Verona.   A disappointed Valentine then sets out on his own.   Proteus’ father Antonio (Arthur Hanket), thinks Proteus should follow his friend to Milan (during the Renaissance children followed the advice and suggestions of their parents).

In Milan, Valentine and Silvia (Britney Coleman), the daughter of the Duke (Mark Pinter) have met and are in love.  When Proteus arrives he too falls for the lovely Silvia. Later, he reveals to the powerful Duke that Silvia and Valentine plan to elope, whereby Valentine is banished from Milan; leaving the field clear for Proteus to present his case for her love.

Meanwhile, Proteus’ earlier love, Julia, assumes the disguise of a male page and travels to Milan to find him.  The now banished Valentine meets a band of rowdy outlaws in the forest and becomes their leader.  Are you still with me?  Good.  Silvia in search of Valentine is seized by his outlaws and is rescued by Proteus, who once again professes his love for her.  Silvia again spurns Proteus.  Once she gets back to her father’s castle with Valentine and Proteus, Julia arrives and reveals her true identity to all, regaining a contrite Proteus’ love.  Two weddings are then arranged:  Valentine with Silvia, and Proteus with Julia.  Shakespeare’s play are heavily plotted and dense with narrative threads that go off in all directions.  So, let’s just say that they all lived happily ever after.

There are some finely judged and very funny performances in this production.  With a cast of twenty-three performers it is difficult to list everyone, however, there are always standouts: Adam Kantor as Proteus; Hubert Point-Du Jour as Valentine, Britney Coleman as Silvia; and Kristin Villanueva as Julia fill those standout roles.

Solid support comes from Lowell Byers as Turio, the foolish suitor of Silvia (with a cod piece that stands out as well); Mark Pinter as the Duke; Rusty Ross as Speed, the crafty servant to Valentine, and Richard Ruiz as Launce, the clownish servant to Proteus and on-stage handler of a scene-stealing black retriever/mix named Crab, that reinforces the W.C. Fields dictum of never appear in a scene with an animal or a small child.  Both are tough acts to follow.  I loved Fields’ snarky, sarcastic, response when asked years ago if he liked children.  “Yes”, he replied, “when they’re cooked properly.”  Not only is Crab, the dog, a scene-stealer, he receives thunderous applause following every exit.

The creative team led by director Lamos is first rate.  The gorgeous costumes designed by Linda Cho fill the stage with a palette of colors.  From dazzling red and sparkling diaphanous white, and long pink flowing gowns to the rich looking blue doublets and cloaks – costumes of the aristocracy – coupled with the contrasting scruffy-looking brown costumes of the outlaws renders the stage design by John Arnone, awash in color.  The lighting design by Stephen Strawbridge and the sound design by Acme Sound Partners, further enhance the vision of director Lamos, who stages his production with a sure and steady hand.

Even though “Two Gentlemen of Verona” is an early Shakespeare play his writing style, plot, and characters are very relevant for today’s society.  Once the audience gets the hang of the rhyme and meter of the language, it’s easy to follow, whether it’s Renaissance Italy or 21st century San Diego.

There has always been a certain amount of scholarly concern over Shakespeare’s intentions when crafting “Two Gentlemen”.  Is it a comedy underpinned with overtones of farce, or is it a farce outright, laced with comedic shadings concerning friendship and the effects of love?

The production is a visually stunning, light entertaining rom/com romp that sends the eternal message that what this troubled world needs, now more than ever, is love sweet love. So enjoy.