The Man in the Empty Space 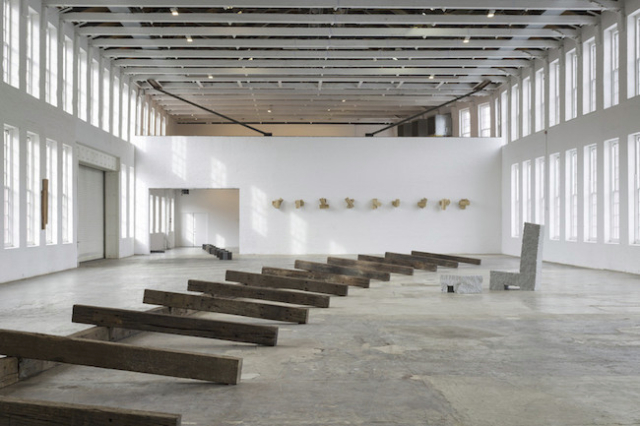 Standing on the stairs of Building 5 in MASS MoCA, the largest gallery in North America for contemporary art, elicits a moment of pause.

During the transformation of this complex of mills in North Adams the second floor of Building 5 was removed. Flanking rows of tall windows remain. In the 19th century workers, including children, labored from dawn-to-dusk in this ambient natural light. Legerdemain and imagination has created a magnificent space for installations. Over the years annual rotations have provided an enjoyable range of interpretative strategies, various ways of filling this impressive container.

Contemplating the space, an active element in the work, we partake of what a curator has dubbed ‘the approach.”

There are alternating curatorial tactics: to leave the room relatively empty, with an emphasis on the space itself. Or, to treat it as a large gallery filled with objects.

The approach of the current exhibition The Man in the Empty Space by Richard Nonas is obvious the moment you look down from the stairs. We observe a sweeping curve of weathered railroad ties. They from an arc at intervals where beams, placed at a right angle, touch each other.

There is a port and starboard sensibility, as if we are navigating a great conceptual wave. The port side is narrow and confines our path, while the other is broad and seemingly deep. There is the sense of the hull of a beached ship.

Within the space can be seen Granite Chairs (2016 Series, Chairs for Bjorn). The stone is rough and monolithic with, in some cases, polished flat seats. One might regard the companion blocks as tables or foot stools for giants. As a part of the experience I asked a guard if I might sit. There is not a chance of damaging such a formidable object, but it is best to inquire.

On the sides and far end of the space are other sculptures in wood. A ladder-like piece rests against the painted white brick wall. The end wall has a row (set high) of smallish, wooden relief pieces. They suggest a variety of possibilities regarding stacking and attaching three thick truncated beams with rough surfaces.

In the tradition of minimalism there is a notion of selecting materials, celebrating their differences, and then placing them in configurations. When deinstalled, for example, the railroad ties are stacked and stored. For the next project the artist may change the arrangement to adapt to the space presented by another landscape environment.

After ten years of working as a field anthropologist at the age of 30 Nonas, with no prior training, became a sculptor. He is now in his mid-seventies, and the MASS MoCA project surveys decades of his work. Initially, a visitor may not think much is going on in this enormous but, as the title implies, provocatively empty exhibition. During a busy day, with another agenda in mind, I gave The Man in the Empty Space little of my time or critical attention. Others passing through the space also seemed to be more interested in glancing than contemplating.

Returning, with a commitment to closer observation, the stunning synergy of Nonas’ work began to reveal itself. Curiosity sparked a closer inspection of the railroad ties. I wondered if they had ever been used. Was there evidence of spikes driven into them? How and why were they recycled? There is always a dada-esque process involved when functional materials are transformed into a work of art. Yet again we considered the impact of Marcel Duchamp, the Found Object and Assisted Readymade, on contemporary art, particularly sculpture.

Nonas makes us think about the gestalt impact of varied materials. What are the perceptual difference between viewing weathered beams vs. new lumber? How do we relate to a seat formed from massive granite rather than wood?

In photos of other installations by Nonas we are presented with double rows of boulders in varying natural settings. What is the difference between seeing these stones next to a decrepit house and then in the context of a formal garden?

Looking closely at the beams in Building 5 intensifies our awareness of the scruffy, experienced, patched-up cement floor. The sight evokes the social history of the mills. Moving around the museum complex makes us aware of different floor treatment in the galleries. These details become a part of our experience of the art.

In the dark space below the balcony there are more small scale and collectable objects. Here there are more explorations of placing and then joining various elements. As in the main space, there is a curving progression of objects.

On the balcony we made our way past a series of metal beams slightly elevated on either end by short elements of the same material. The edge of this space provides another spectacular view of the gallery and its curving installation.

Next up is Nick Cave’s much anticipated site-specific piece, which opens in mid-October.

This review is reposted courtesy of the Boston website The Arts Fuse.