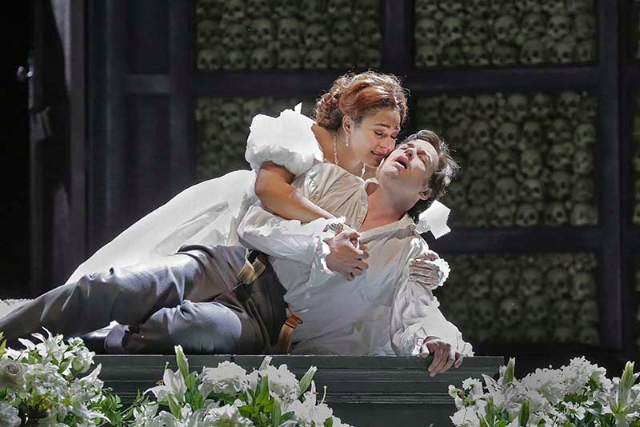 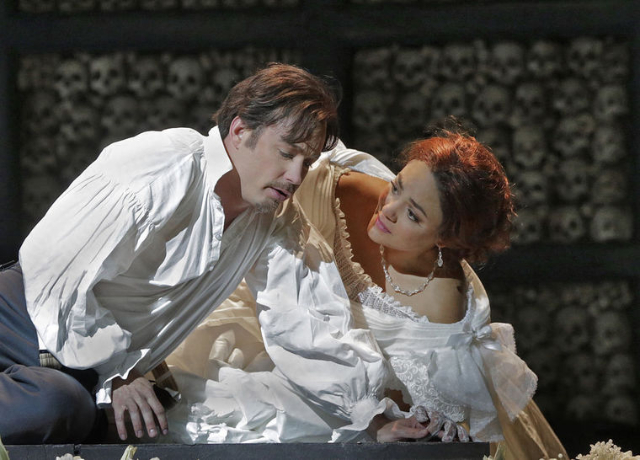 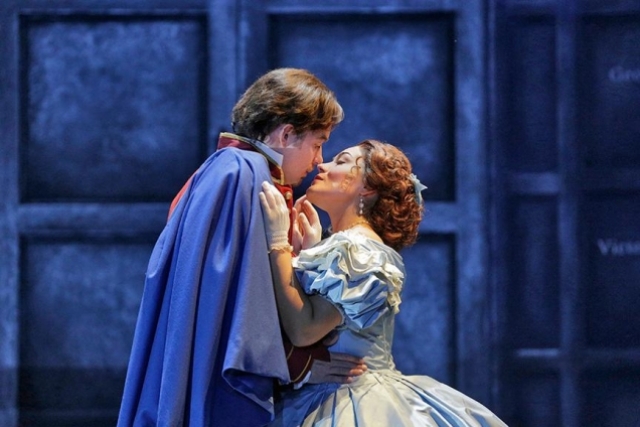 The Santa Fe Orchestra under Harry Bicket charges in the introduction to Gounod’s Romeo and Juliet with a dark gusto. On stage, the Capulets in blue sword fight with the Montagus in red. We quickly cut to the choral summation of the famous tale of ill-fated lover who pave the way to peace among naturally-born enemies.

At the Santa Fe Opera attention is carefully paid to connecting the visual references to the story and the music. In a particularly charming bow to a scene change, the men help the women take off their long black mourning capes and begin to dance at a ball in white gowns hidden underneath the black capes.

Juliet, sung beautifully by Ailyn Pérez, enters from the rising rear stage, trips down the steps with her nurse, as her wide light blue dress billows. She is every bit an innocent seventeen-year-old girl. Her voice is as eager and pure as her expressions.

As Romeo, Stephen Costello, gives a masterful performance to be reprised at the Metropolitan Opera in March. He sneaks into the ball disguised. Costello suggests the deep pleasure we will have in his devastating performance to follow.

After Romeo has a bad dream about the outcome of his adventure, his pal Mercutio dismisses the dream’s content as the work of the Goddess of Lies in a finely wrought aria.

The orchestral score of the opera is lush and full of French perfume. Bicket takes it at a perfect pace, thrusting forward and yet leaving time for the pleasure of the harmonies.

Constantly wrapped from stage right through through the back and on to stage left are the containers for deceased, their names selected from the history of the period. The omnipresence of death which is drawn in the opening chorus of the opera is subtly suggested by this persistent image.

Only when the walls go very dark in the Capulet’s garden do the names fade away, to be dominated by a statue of Eros with a drawn bow. Eros is the God of Love and does not o a very good job of protecting his lovers in this opera.  He does provide cover for Romeo In a particularly charming directorial touch, Romeo hides in the garden by imitating the statue’s pose.

As the opera unfolds, Costello comes into his own. Since he was first singled out in high school musical productions and greeted at his Metropolitan Opera debut by a busload of his townfolk who arrived from southern New Jersey on a moment’s notice. Moving up from cover to star in twenty-four hours, Costello has studied under the wing of the pre-eminent music teacher Bill Schuman.

Costello always suggested not only great promise, and the possibility of a singular career of a great divo. He realizes the promise in this role. With a slight edge and texture to an otherwise lovely voice, he has added emotional depth and phrasing to his take on this role. It is a magnificent, career defining performance which should launch the tenor into the upper stratosphere of opera. He deserves his place there.

The balcony scene changes Juliette from a perky young girl into a mature woman, ready to sacrifice all for the love of her life. Pérez has the delicate touch necessary for this instant transformation.

Mezzo soprano Deborah Nansteel as Juliette’s nursemaid sings a winning interpretation of the role, including lusty advances toward men on stage, perhaps inspired by her mistress’ entrancements. Performances by baritone Elliot Madore as Mercutio, bass Soloman Howard as the healing Duke, and tenor Cooper Nolan as Tybalt are noteworthy.

Other particularly memorable moments are the Romeo and Juliet duet, O night divine,  the chorus and cavatina …the birthplace of all beings.., and instrumental interludes.

Santa Fe does a remarkable job of using its open air setting opportunities and the elevator riser to center stage, from which the statue and various bedding opportunities rise during the course of performance. Set changes are seamless and make the presentation more unified, allowing action and performers to make their own distinctions. Gounod’s orchestration is memorably presented by Bicket and Costello’s perfect singing of the difficult Romeo role are highlights of this luscious evening.