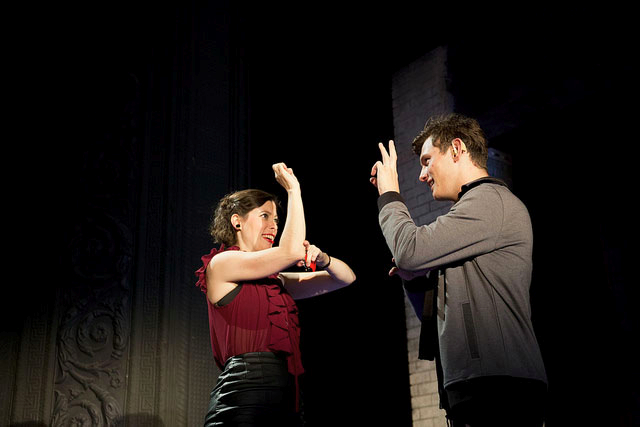 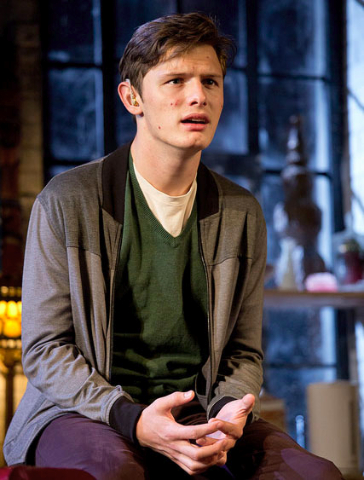 Billy was born deaf but raised to be "normal." 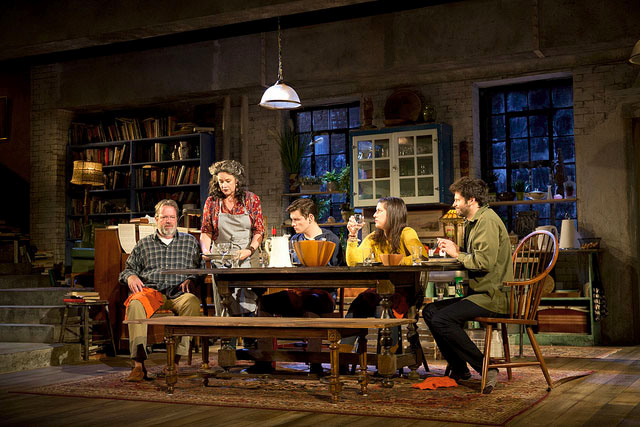 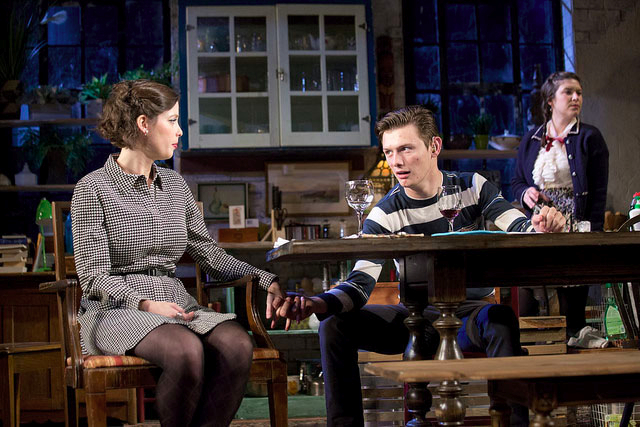 Billy reaches out for the support of Sylvia. 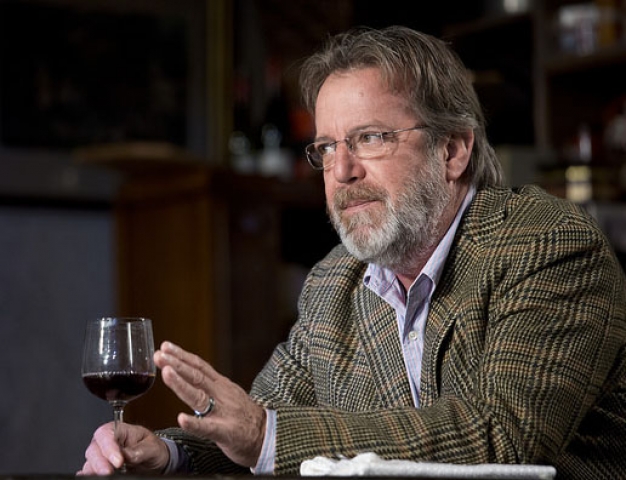 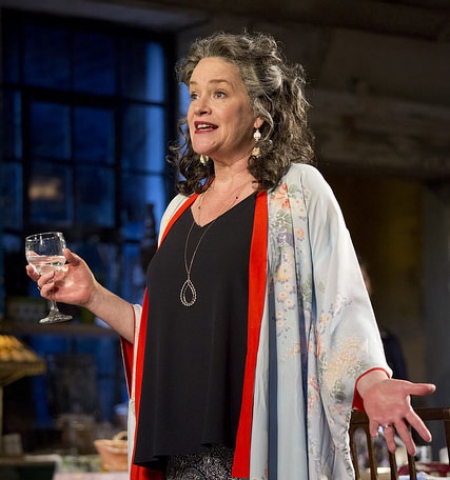 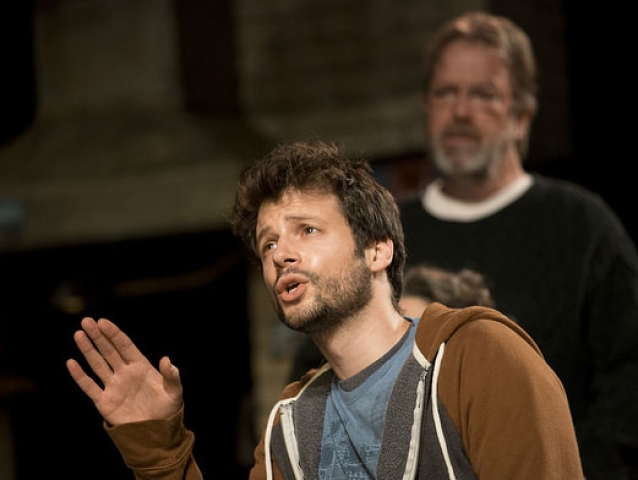 Daniel (Mlles G. Jackson) hears voices and is overshadowed by his father. 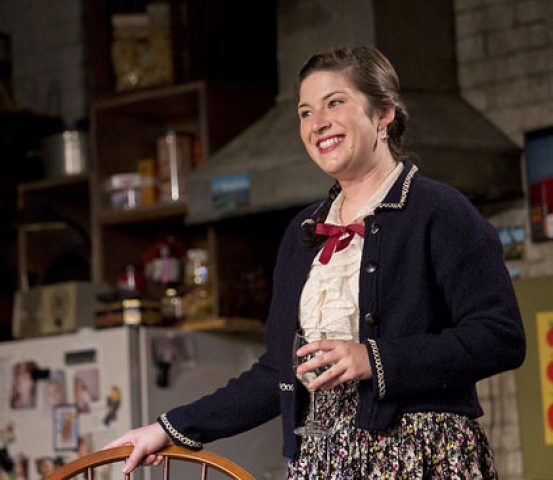 Ruth (Justine Salata) has no talent for opera and can't find a boyfriend.

Tribes is an award winning 2010 play by British playwright Nina Raine. It was produced Off Broadway in 2012 and has been given numerous regional productions. It is directed by Jenn Thompson for Barrington Stage Company through September 3.

Contemplating the set designed by John McDermott there was an oppressive sense of clutter. The stage is framed by cold, hard, cinderblock piers with a thick, cement-faced steel beam closing the space. This surface is used for the projection designs of spelled-out text by Alex Basco Koch.

Even before a word is uttered we encounter this mishegas, off-putting, dining room/ kitchen. It evokes a claustrophobic, singularly uninviting home. There is an area that denotes the book-filled, man cave of the patriarch of the family Christopher (C. David Johnson).

We assume that this singularly uninviting set is a metaphor for what proves to be a message-laced evening of theatre.

Almost immediately our instincts, based on the visual gestalt, are confirmed as we encounter a remarkably unappealing, argumentative, intellectually bludgening family.

Given the dominance of the father, a retired (perhaps failed) academic, he now writes cranky books of criticism in a field that is never articulated. His wife Beth, dressed in ludicrous, middle aged, hippy schmattas is writing a “marriage-breakdown detective novel.” Oh my.

If Dad is a verbally abusive bully, Mom is a bats-in-the- belfry, delusional piece of work.

In general, the poorly dressed women (Tracy Christensen), added to that flea market set, do the job of telling us how out of touch, delusional and tedious these people are. Some of Beth’s superannuated, hippy-dippy outfits just made us gasp. There is nothing less appealing than an over-the-hill flower child.

They have three, twenty-something, stay at home children who, with varying degrees of dysfunction and immaturity, have yet to leave the nest. Daniel (Miles G. Jackson) is stalled in his degree program trying to write a thesis about “language doesn’t determine meaning.”

The daughter, Justine Salata (Ruth), while fending off taunts and insults, pursues a sketchy career performing arias for a few quid. She is fast becoming an old maid and sobs about not being able to find a boy friend. Gosh, we wonder why.

Seated around the table while served Mom’s steak and kidney pie they love to argue. Language is the game and words the weapons of choice. Daniel (whom we gradually learn is bi-polar and hears voices) is particularly sharp and shrill but rarely prevails. Most often the family is shouted down by their father. The attempts by Mom to protect them absurdly fall short.

In this maelstrom of verbiage approaching cacophony, Billy (Joshua Castille), remains meek, silent and almost invisible. Born deaf he has failed to learn sign language but can speak adequately and lip read.

That unique ability leads to a disjointed plot point.

The paternal policy is not to treat him with any deference to handicap. He has been raised as normal and functional. Mom has labored long and hard to teach him to speak. The family consensus is that there is nothing wrong with him.

Until, that is, he meets and becomes romantically involved with Sylvia (Eli Pauley) a woman who is gradually losing her hearing. She introduces him to the community of deaf people (The Tribe) in which, for the first time, he feels commonality and support.

She is teaching him to sign. In a flash, which isn’t logical, he is fully adept. It is also not clear to what extent Sylvia is hearing impaired. Her speech is normal and she does not appear to be wearing a hearing device. There is a non sequitur when Daniel hits on her.

These are just a few of the conundrums in a play that has too many lapses of logic.

When it comes to love this family is an utter failure. The only thing that seems to glue them is malicious banter and word playing. Of which, of course, Billy is odd man out.

There is something of a blood bath when Billy takes Sylvia home to meet the folks.

Christopher takes this as an opportunity for intellectual jousting about signing as language and the extent of its limitations. The argument focuses on why they have refused to allow Billy to learn to sign.

Even Daniel gets in the act by challenging her to sign the subtle lyricism of poetry. This she manages with some deftness.

In the second act, with the support of Sylvia and the Tribe, Billy comes into his own. In a confrontation he refuses to speak to his family with an ultimatum that they must learn to sign.

You may imagine the reactions and how this informs what by now has become a very forced drama. When Billy finds himself, while at least temporarily losing Sylvia, we are worn out. There is not much left in the tank to really care for these nasty characters. While the drama has made us more aware of the issues of the deaf community it stumbles along to a less than compelling resolution.

By then everyone has more or less lost it. There is a family meltdown punctuated by a poignant exchange between the brothers. It was just another moment in Tribes that felt contrived.