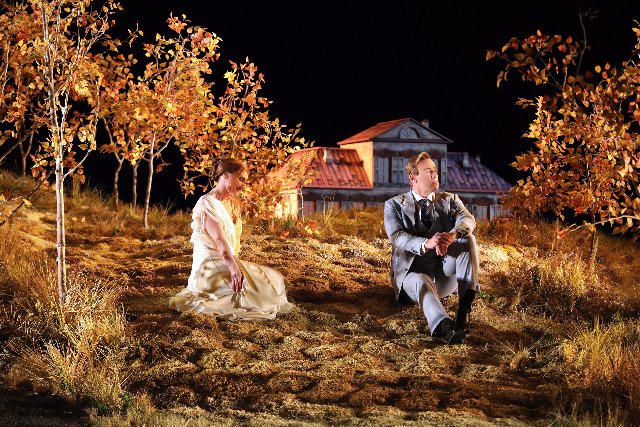 The indelible mark of the Russian soul is stamped on the operas of even the most Europeanized of 19th century Russian composers.  Tchaikovsky’s “Eugene Onegin” falls in that camp with its pathos revealed in rich, melodious music.  Not to mention that it competes perhaps with Mussorgsky’s “Boris Godunov” as Russia’s most important opera, both for its artistry and its cultural connectedness. Santa Fe Opera has overcome Covid obstacles to produce a vivid and highly rewarding production of this significant work.

The opera derives from Pushkin’s novel of the same name, a revered literary masterpiece.  The narrative, composed entirely in verse, reveals a panoply of social themes including love, honor, social hierarchy, and convention.

Tchaikovsky’s musicality characterizes the Romantic Era, with emotional melodies supported by lush (not having used that word in my last three reviews, I’m now entitled!) orchestration that stands on its own thanks to the composer’s inestimable talent with instrumental composition.  Haunting leitmotifs and beautifully turned musical phrases occur throughout, though at times they seem a bit repetitive.  Whole passages introduced  by Lensky’s aria and Tatyana’s letter scene in Act 1 recur repeatedly.

The plot line deals with the tragic side of romance, but as with librettos of many other operas, significant moments sometimes occur with little prior development.  Nonetheless, “Eugene Onegin” not only represents the greatness of Russian opera but is one of the fine representatives of the whole operatic idiom.

Director Alessandro Talevi marshals the creative team to give a look that blends traditional and modern elements.  Contemporary set design generally calls for each venue in an opera to be separately represented, yet, oddly, Tchaikovsky’s stage concept called for no scene changes, embracing visual simplicity. The versatility of Gary McCann’s  formal interior derives from moveable furnishings, while a steeply raked exterior to the rear adds appealing contrast carpeted with golden fall colors.  Costumes of the principals are traditional.  Those of the dancers and spirit animals are gaudy, colorful, and highly sequined with full face-and-headress covers, some with Dia de los Muertos themes that would certainly be foreign to Russians.

The title character Onegin acts as the antagonist in the story by engaging in a senseless duel with a dear friend and in rejecting Tatyana’s love overtures.  Despite the opera’s title, she is the central character in Act 1, dominating the stage and commanding the emotional involvement of the audience.  She also exercises control over Onegin in the final sequence of the opera.

Tatyana is performed by Sara Jakubiak, who shimmers with dark vocal hues and rich tremolo. Rising to the occasion, she delivers the 13-minute letter scene soliloquy in which she pours her heart out to Onegin on paper, demonstrating total command and conviction.  In this pivotal aria, the motifs and the insistent and incessant chases between flute and other wind instruments contribute to an ethereal delight.

Onegin exemplifies the idle rich and all that they represent.  The arrogance and  lack of empathy that they embody are well captured by baritone Lucas Meacham.  Tatyana’s attraction to him is indicative of the draw that men of power and place possess despite their character shortcomings.  Onegin’s crassness shows through in his pathetic excuses for rejecting Tatyana’s early advances in contrast with his slavish infatuation when she becomes a princess. Meanwhile, Jakubiak transitions convincingly from the naïve, rustic ingenue to a noble’s wife.

Meacham is a dynamic force as Onegin, displaying power, agility, and tone. In the final duet between Onegin and Tatyana, both Meacham and Jakubiak demonstrate consummate emotion, vocal fireworks, and control.

Lensky, sung by Dovlet Nurgeldiyev, is given some of the finest music in the opera.  His aria, leading into the duel with Onegin, is among the most memorable.  Harking dolefully back on his life and love for Tatyana’s sister Olga and foreboding a tragic end, his lustrous and pure tenor voice is wondrous.

Santa Fe Opera overcame many Covid-19 related obstacles to put on this fine production.   While losing their initial castings for the two key roles because of visa restrictions, their replacements could not have been finer.  Because of staging restrictions, the rousing Polonaise is danced in the round by the Wise Fool New Mexico dancers rather than as a stage-filling formal couples dance as would be true to the music’s roots.  Contemporary dance movements also distinguish the pageantry, but the dancers lacked the precision necessary for a performance of this importance.

Finally, there is an only-at-Santa-Fe-Opera-House modification.  Public health restrictions determined that the chorus could not appear on stage.  For those who are not familiar, the stunning opera house is open to nature on the sides, so temporary seating for the chorus was built outside of the orchestra-left seating, facing the audience from the side.  I can’t speak for those in other locations, but from my seat on the center-left aisle, the sound of the chorus has never been more immediate and thrilling. Incidentally, choristers are "apprentices" who are accomplished artists that often sing principal roles in this and other opera companies. Thanks to Santa Fe Opera for finding a way to bring their wonderful opera productions back to their astounding edifice.

“Eugene Onegin,” composed by Pyotr Tchaikovsky with libretto by the composer having contributions by Konstantin Shilovsky and based on the novel of the same name by Alexander Pushkin, is produced by Santa Fe Opera and is performed at the Santa Fe Opera House, 301 Opera Drive, Santa Fe, NM through August 26, 2021.