Beauty Queen of Leenane at S&Co. 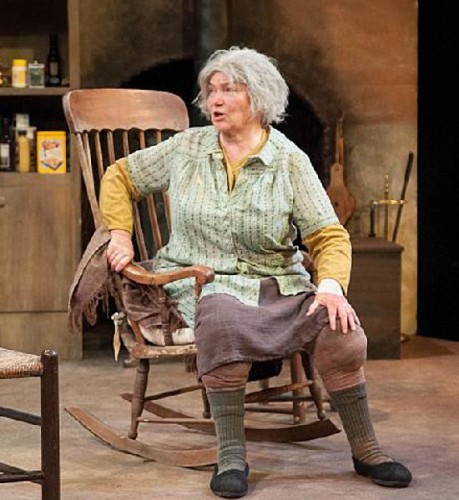 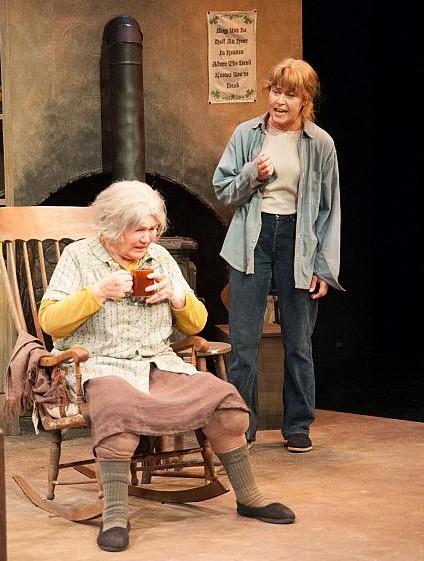 A hateful relationship between mother and daughter Maureen (Elizabeth Aspenlieder). 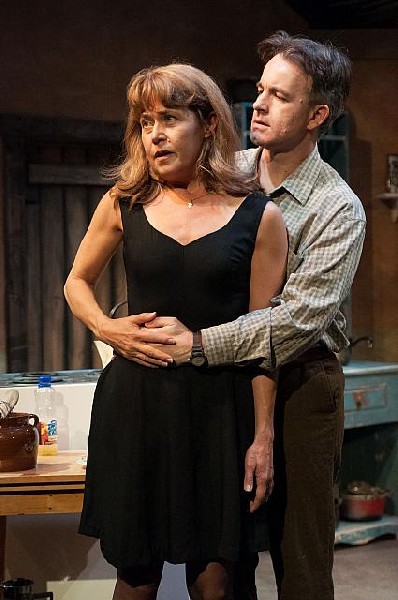 A night of romance with Pato (David Sedgwick). 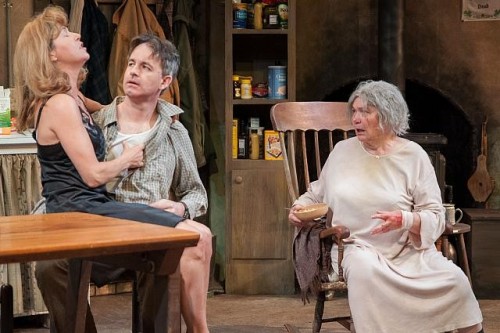 In bra and slip the next morning. 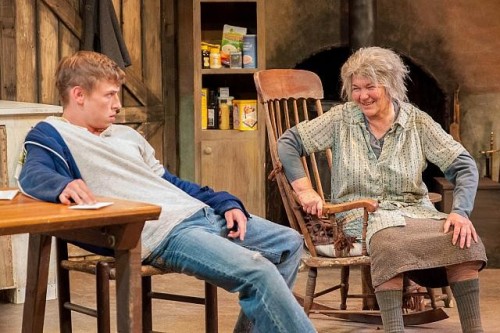 Cat and mouse with Ray (Edmund Donovan) to snatch the letter.

The grim and totally absorbing play by Martin McDonagh The Beauty Queen of Leenane is set in a seedy, run down cottage (designed by Patrick Brennan) in rural County Galway. There are few amenities beyond the basic needs of raw survival.

We learn that there is the smell of wee that pervades the space. The 70-year-old feeble and dependant harridan Mag Folan (Tina Packer) dumps her piss pot down the sink. According to her long suffering spinster daughter, and care provider Maureen (Elizabeth Aspenlieder) she doesn’t even bother to rinse.

The days of the old hag dressed in rags (by Lena Sands) with an unkempt mass of knotted gray hair are spent in a rocker in front of the small telly. Time is measured out waiting for the evening news broadcast and listening to scratchy Celtic music on a cheap and distorting radio.

From her seat she controls the space around her with a non stop screed of commands and insults. Anyone who enters the space, other than Maureen, including the lovely young neighbor, a crisply played teenager Ray Dooley (Edmund Donovan), are immediately ersatz servants to make a cup of tea, fetch a biscuit, or put more turf in the pot bellied stove.

Initially we struggle, as do Aspenlieder and Packer, to get a handle on their Irish brogues. They meander in and out as we try to catch the drift. There is an ironic conversation about the significance of speaking English in Ireland rather than indigenous Gaelic. But that Gaelic is of no use if you seek work in Great Britain or emigrate to America the land of the royal Kennedys. There is a framed photo of Jack and Robert displayed on a shelf.

That dialogue is all the more important given that this is a Shakespeare & Company production where language and enunciation are so essential. It is the norm to hear the magnificent Packer, the silver tongued founder of the company, rolling florid verse from the stage. Here, in perhaps the meanest and most harrowing performance of her career, don’t miss it if you know what’s good for you, spitting out gruff, wretched grunts in a shattered car crash of language more Cockney than Irish.

Surely there is no more unpleasant and inhumane character in the canon of contemporary theatre. McDonagh is one mean bastard of a playwright punishing actors as well as audiences.

Now isn’t that just grand wouldn’t you say love. Indeed what a fine and clever fellah he is and all.

There are those who complain that there is no redeeming hope in a horrific evening of theatre. Why on earth would we, like the long suffering Maureen, subject ourselves to such abuse?

In the Albany Times Union critic Steve Barnes reports “The portrait of a toxic mother-daughter relationship, the drama is a brutal experience. My theater-going companion said afterward, ‘Please don't take me to see a play like that ever again.’ Even its co-star Tina Packer, the grand dame of Berkshires theater, has said she finds it so unpleasant that she's looking forward to Sept. 15, when Shakespeare & Company's production ends.”

For me, however, I see the play as a powerful metaphor on the perennial Irish condition entailing centuries of occupation, war, starvation and repression. Imagine the consequences of having the very language and culture taken from you. Arguably, McDonagh’s ironic play, with its oh so dark and claustrophobic satire and humor, rings as true today as Swift’s A Modest Proposal did for its era.

All of that misery, the squandering of gorgeous and gifted generations, is a rich resource that fuels the venerable tradition of magnificent Irish story tellers, poets of pub and stage. That wonderful Irish gift of gab.

The play is all about hope and the lack thereof.

There is the terrible tradition that a daughter, generally the youngest and a virgin, is bound by duty to provide care for the parents. The other siblings escape, to marriages, or emigration to start a new life as illegals in South Boston. As did my mother’s ancestors on the Nugent homestead in Rockport, Mass. There my great grandmother Nora gave birth to thirteen by her philandering husband Patrick who also seduced her sister. Four died as young adults and my mother recalled hearing her grandmother cry herself to sleep during summers spent on Beaver Dam Farm.

Pato Dooley (David Sedgwick) is that last ray of hope for Maureen. Now 40 she has kissed but two men in her life. Pato will be the third following a rare night out of dancing in the village.

He is home briefly to see off a crew of Yanks headed back to the States. They are mates from his construction job in England. There he earns a paycheck but bears the insults of being bloody Irish. Now and then he nurses a pint alone in a pub.

Even the dried up spinster Maureen is a too rare woman for his empty bed. Her’s actually as we watch with intense fascination while she seduces him. But what about your mother he asks? No bother.

Next morning, oh my. He is up early confronting the surprised Mag. Of course he is commanded to wait on her hand and foot. He makes her porridge and tea.

Eventually Maureen appears in bra and slip. She cavorts about hugging and kissing to a chorus of denunciations from Mag. We took precautions she explains with no remorse. But it appears this is but one of a jungle of fantasies that begin to ensnare her eventual demise.

It seems that nothing happened. There was an equipment malfunction.

But the flicker of romance is a real threat. Mag insists that he should have nothing to do with an insane and delusional whore. She has the documents to prove it. But the fine and manly Pato doesn’t care. He is smitten. He makes the fatal mistake of telling Maureen to put some clothes on against the cold. Maureen, now beginning to reveal symptoms of mental instability,  assumes that he doesn’t want to see her in her bra and slip.

Forced out of the house Pato insists that he will write to her.

Pure, magnificent poetry that begins the second act. In a wonderfully halting manner Pato speaks of his love for The Beauty Queen of Leenane as he called her during their brief encounter. He’s off to Boston with the promise of a job and invites her to join him once she has settled affairs.

The letter is sent to his brother Ray with instructions to put it only into her hands.

When he comes to the cottage delivering the fateful letter Maureen is not home. What ensues is a wonderfully comic game of cat and mouse. Of course Mag is determined to snare the love note, read and destroy it.

The audience gasps and mutters as Ray, played with terrific invention and the most authentic brogue of the lot, keeps asking how soon Maureen will return. His patience is running thin as he squirms about. Clearly he can’t stand another minute in the pissy cottage. Eventually, with a heartbroken gasp from the audience, he relents making her first swear to deliver the letter unopened.

There is some terrifically clever deception but of course Mag reads then destroys the letter.

Things just go from bad to worse from there.

We staggered home from yet another shattering evening of theater. What an ordeal. But I wouldn’t have missed it for the world. It brought out what’s best about Shakespeare & Company the guts and risk taking of a magnificent family of actors.

How blessed we are to have the fabulous Elizabeth and Tina at our beck and call.

Now be a love Maureen and fetch me a nice cup of tea and a biscuit. That’s a dear.