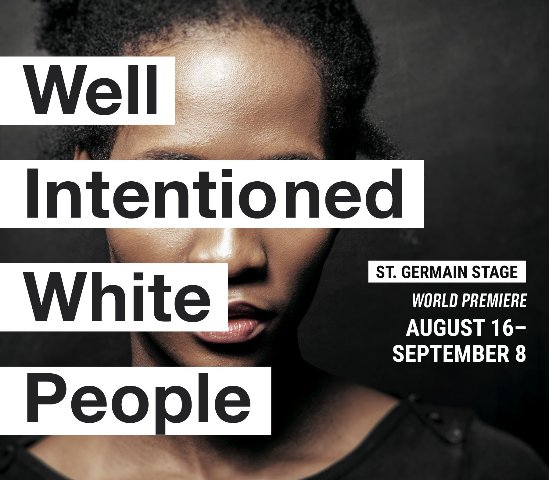 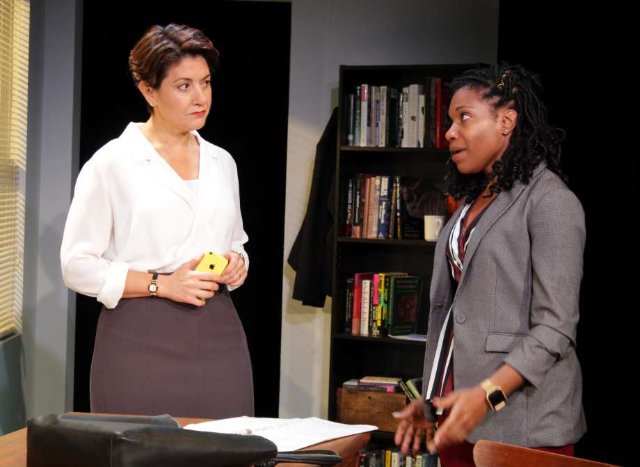 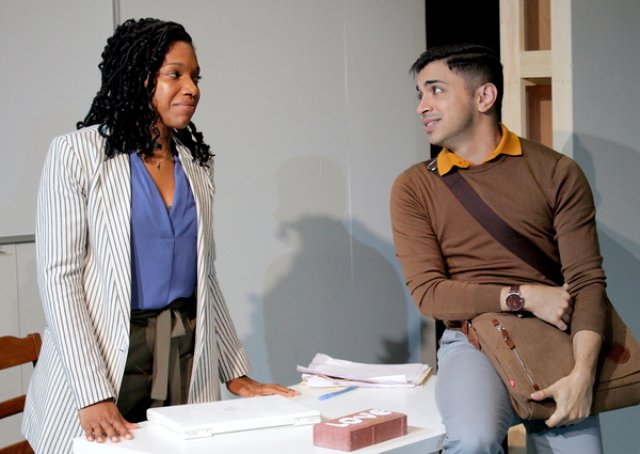 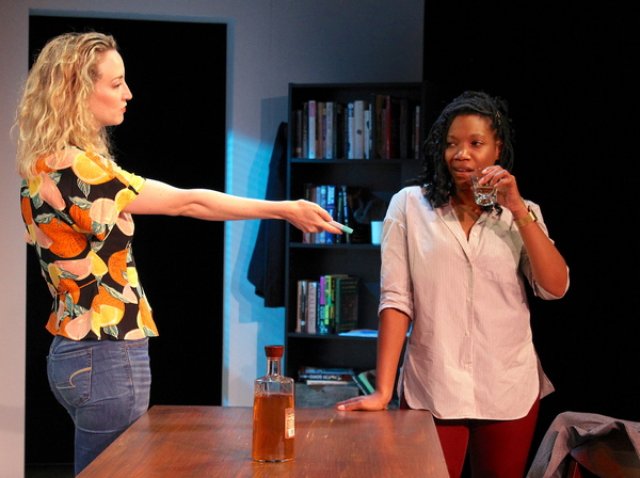 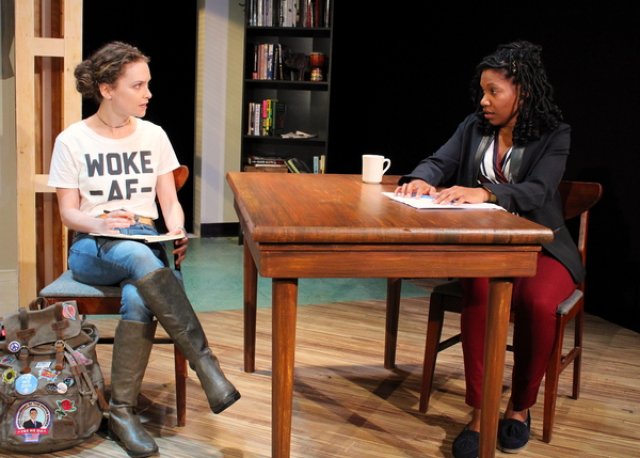 A contentious meeting with the student Mara.

We encounter her in a generically furnished, think Goodwill, apartment (designed by Adam Rigg) in a small college town in what playwright Rachel Lynett identifies as a Red state. The set is arranged horizontally with the living room bracketed by multi purpose areas serving as kitchen, office, and class room.

The feeling is that this is transitional. A signifier is a truly hideous, quasi abstract, hard edge painting that hangs over a yard sale couch. That, and a ugly coffee table, convey that living conditions for junior faculty differ little from those of students.

As a young scholar at a small, liberal, dominantly white college Professor Davis has already accomplished  a lot. She has published and was a keynote speaker at four conferences in the past year. Her academic field, Caribbean culture and the literature of the diaspora, is narrow and esoteric particularly in a non university setting.

It identifies her token role of bare minimum diversity for the college. And she is gay. During an orientation diversity meeting for faculty much was made of that by the zealous, overreaching Dean West (Andrea Cirie). When making her remarks about the importance of tolerance for race and gender she also paused and directed her gaze at Parker (Samy el-Noury).

This outed him as transgender. It is something he prefers to keep private particularly regarding students. He is best friend and confidante of Cass. They discuss problems he encountered while transitioning.

Parker’s additional qualification for otherness is that he is a person of color. This is a bit vague but apparently he is Puerto Rican.

There is nit picking that pervades discussion of gender and race. By default, Cass is assumed to be African American which she is not. Her parents were Caribbean and she is a scholar of that heritage. She is also versed in African as well as African American culture, history and literature. There is a reference to the African novel "Things Fall Apart" by Chinua Achebe. It has become a syllabus standard.

As flies in the buttermilk there is bonding between Cass and Parker. In pursuit of  academic careers they are stuck in the Siberia of small town, racist America. They must play the game, pay dues, and hope one day for a position with a university.

The demands of teaching  and research leave little time for a personal life.  It’s nearing the end of the semester and crunch time for grading papers and preparing exams. As persons of color bars are expensive and risky. They hang out at home drinking beer. When things get rough Cass hits the hard stuff.

Casually, and almost after the fact, Cass mentions to Viv (Victoria Frings), her ex, that someone has keyed her car with the N word. Immediately Viv, completely out of line, insists on calling both campus and local police.

As a person of color, Cass has no interest in that. What’s the point she correctly argues? Absolutely nothing will result from involving the cops.  By filing a complaint, particularly in a small town, does that out her as a trouble maker? What happens when she is subsequently pulled over for a "routine" traffic stop?

Viv will have none of that. While proclaiming that she fears for Cass, Viv launches the catastrophic chain of events that defines Well Intended White People. What slips out is "what happens to us?" Cass later counters that Viv's actions have been all about herself.

The identity of Viv is never clear. It is credible that they were lovers but the current relationship is confusing. Although they have broken up she is still hanging around. Cass is opting to sort it after the semester. Her life is on hold until then.

As an uber liberal, activist,  and well intentioned white person Viv represents palpable danger. She heads a non profit that provides food and services for gay people in shelters. In order to qualify, as Parker points out, clients are forced to out themselves which puts them at risk. It's a metaphor for the damage that Viv inficts on Cass.

Sworn to silence, Viv has spilled the beans to her sister, a reporter for a local paper. She will pull similar stunts later in the drama.

The front page story, which describes but does not name Cass, comes to the attention of Dean West. During a confrontation the Dean wants to turn the attack into a teachable moment. Instead of compassion and support, Cass is mandated to organize an event and serve as its keynote speaker. This escalates into a week of meetings with Parker as co chair. The expanded event will  address issues of race, gender, and immigration.

Like most liberal white people, the point of Lynette’s play, the Dean is self absorbed, righteous and dead wrong. She blurts out to Cass that she understands black people because, get this, she spent a semester at the historically black Howard University.

The playwright sets this up for laughs. It is less about humor than reaction to absurdity. To make points Lynett shoots fish in a barrel.

The drama devolves into caricature. We cringe as Cass acquiesces to every outrageous demand of the Dean. She is up for tenure and the Dean chairs the committee. The tenure meeting will occur after the conference.

Desperate to find speakers on absurdly short notice Cass is told to involve an outspoken, trouble making student. Mara (Cathryn Wake) has been profiled in the school paper for  wearing a hajib.

During an office meeting that goes south Cass asks if Mara is Muslim? The answer is no, Catholic. It was a gesture of "solidarity."  The tables turn as Mara asks probing, outrageous questions. Finally Cass asks “Am I being interviewed?”

The answer is yes for the school paper. It’s an assignment, of course, generated by the Dean. Cass rightly asks “Don’t you have to ask my permission?” Mara further demands that Cass admit her to an advanced class. The professor denies the request as an introductory course is a prerquisite. Exasperated, Cass terminates the meeting.

That’s a no no. In the current academic environment, which the playwright satirizes, students are clients and consumers. In conflicts with faculty the customer is always right. Students pay the bills and deans routinely take their side. Mara has filed a complaint of, what else is new, discrimination. In an all too familiar manner the Dean mandates that Mara be admitted to the class.

The stress level escalates. Hate mail has been going on for months and more attacks occur. Cass confides in Parker who shares his concerns with Viv. By now you get the picture. Parker also mentions casually that a transgender friend, an artist whose field is Caribbean studies, is being interviewed for an adjunct position. Many small colleges, marginal, for profit, and state universities, deny tenure and staff with adjuncts.

In a meltdown, Cass yells at Parker that it's not enough that I'm black and gay, now you have to be trans to get tenure. It's a hurtful moment which she tries to call back. But, as the drama careens along from there, as Achebe put it, things fall apart. In the midst of a bender Cass tears up her keynote speech and tells it like it is. This is the most compelling moment in the play. It left Barrington's white liberal audience cringing in their seats. It should have ended there but staggered on.

This is the first play produced professionally by Lynett. There is much to like about it but work remains to be done.  This social justice drama was a diamond in the rough.