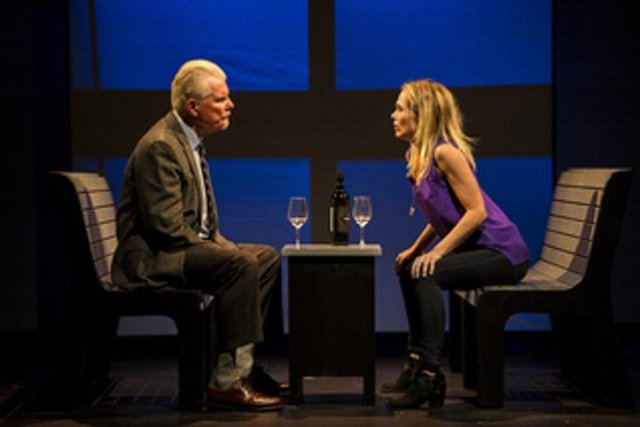 His contributions to theoretical physics are viewed as equal if not superior to those of Albert Einstein.

During WWII he was the head of the German team charged with developing an atomic bomb. That didn’t happen and there has been enormous speculation about his role. The play Copenhagen by Michael Frayn, which we saw in 1998 when it premiered in London, recreated and embellished a meeting in Nazi occupied Denmark, with his mentor Niels Bohr.

A highlight of the play occurs when in their darkened living room Heisenberg demonstrates how his uncertainty principle occurs in a manner that cannot be seen by a microscope.  Moving randomly about with a flashlight he encounters another atom (Mrs. Bohr) and bounces off of her. This contradicts the other notion of wave theory.

For the purpose of Heisenberg, a play by Simon Stephens produced by Shakespeare & Company, it is reduced to  “…if you watch particles or a thing or an object closely enough, you can't see where it's really going or how long it will last.”

That’s a highfalutin' stretch, conceit, and bollocks by a pretentious, British playwright. We don’t need quantum mechanics to comprehend a confusing, not terribly amusing, overcooked, two hander. It presents  a 75-year-old,  British bachelor and butcher being scammed by a manic, motor-mouthed, young, attractive American con artist.

By chance encounter, think of Heisenberg’s random flash light, they meet at 6:25 PM in the forecourt of St. Pancras Railway Station. Alex Priest (Malcom Ingram) who likes to walk  around London is taking a breather on a bench. In an over-the-top conversation that ensues with Georgie Burns (Tamara Hickey) he asks why she had kissed him on the back of the neck?

For him, a perfectly normal, no frills, down to earth butcher it’s a quite simple and logical question. Her convoluted answer in anything but.

Five days later she tracks him down at his small shop. An interesting prop, a side of beef, hangs on the wall of a minimalist set by Juliana von Haubrich. Of course he wants to know how she found him. Google is the answer but the better question is why? They appear to have nothing in common.

Making conversation she asks what he likes about being a butcher? “The animals” is his surprising answer. Particularly the structure of them and how to take them apart. We stare at the carcass and examine its ribs and sinews. In his way of thinking it makes sense.

By contrast, nothing that Georgie says or does adds up. Either as written by Stephens, or directed by Tina Packer, the histrionic Georgie gets on your nerves. Her hideous, working class, New Jersey accent grates on the ears. There is a touch of a flat Southie, Whitey Bulger, sort of twang. That may inadvertently go along with her gangster personality. When Georgie later raises the issue of personality, Alex, who waxes rather philosophical for a butcher, theorises that there is no such thing as personality. That’s just a result of actions and circumstances.

She asks if they might go out on a proper date. Again, think of Heisenberg darting about with that bouncy flashlight. That’s the turning point and we wonder whether Alex, a conservative, straight, nice guy will wise up to the grift she’s running.

But he takes the bait, hook, line and stinker, when she asks if he would like to sleep with her. By which she doesn’t mean just sleeping.

Stepping back from what’s on stage you hash it out. Yes, she is young, slender and sexy. Even for a septuagenarian that’s plausible if only she keeps her friggin’ trap shut long enough for a decent shag.

You don’t need quantum mechanics to figure out what happens next.

During pillow talk he proves to be far more interesting than we ever imagined. He likes all kinds of music and the list goes on and on and on. It even included disco and techno pop, as well as, German noise music. And, he likes to dance. The tango. Out of the blue she asks for 50,000 pounds to return to New Jersey and search for her son who has recently married.

Flashlight or not we saw that coming. During this denouement she back tracks and tries to unravel the Gordion knot of lies and cons. Here cue up Rudi Giuliani on “Truth isn’t Truth.”

Possibly, I might enjoy another production of this play. Other work by these actors at S&Co. has been outstanding. In the more grounded role Ingram is rock steady as usual. Packer has done no favors for the performance of Hickey. Taken down a few notches, and played with a soupçon of irony, her Georgie might have been less grating and annoying. Of that, in a quantum sense, I am absolutely certain.