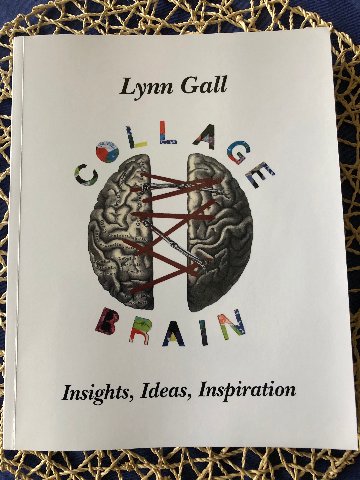 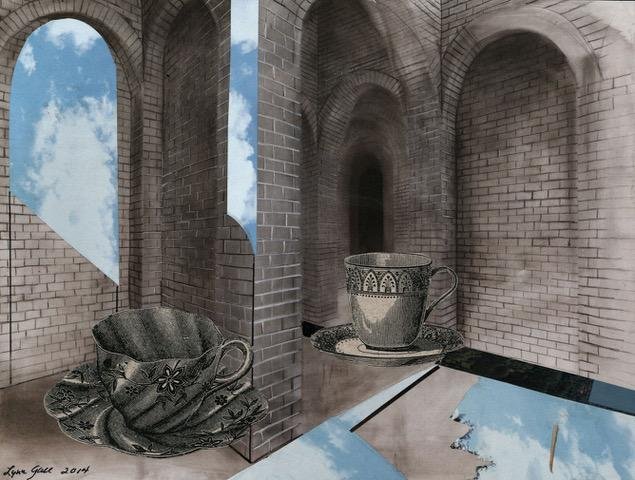 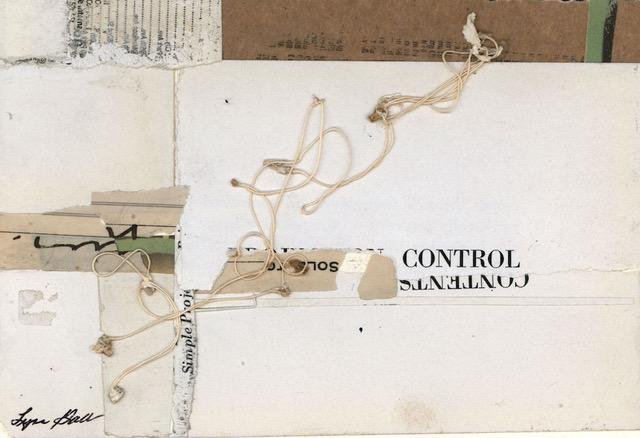 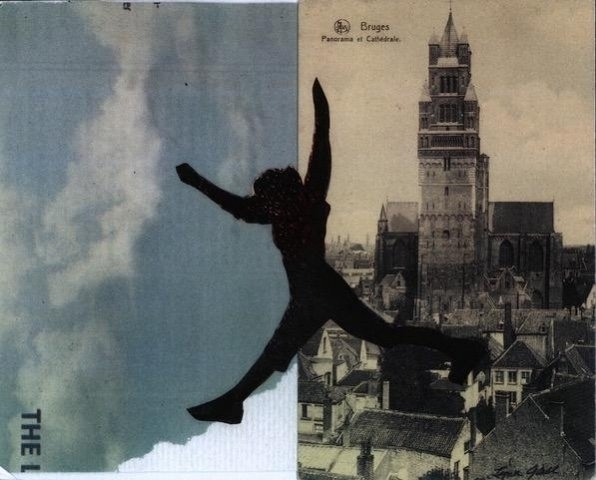 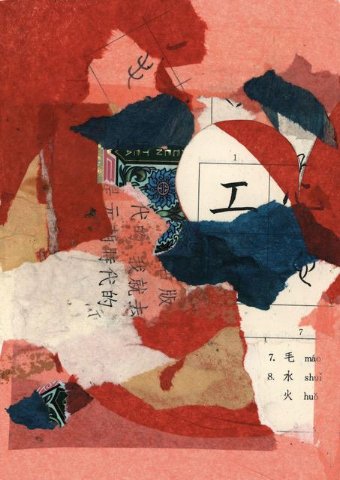 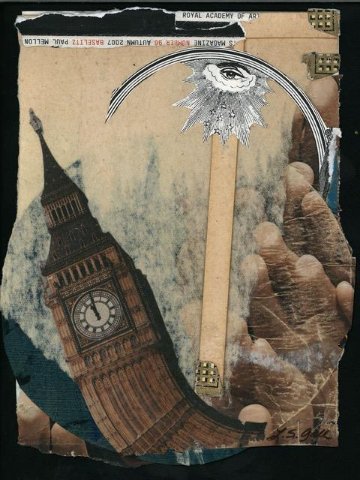 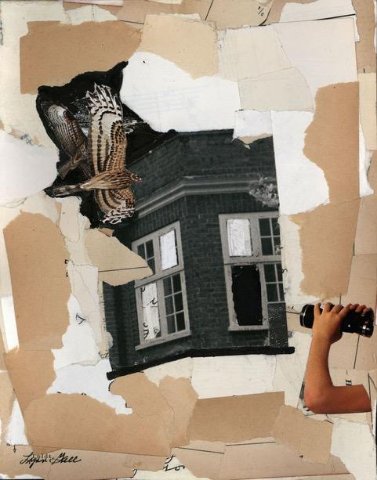 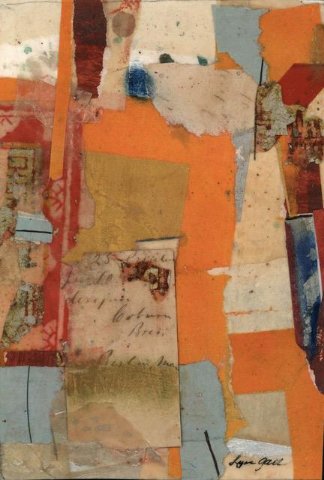 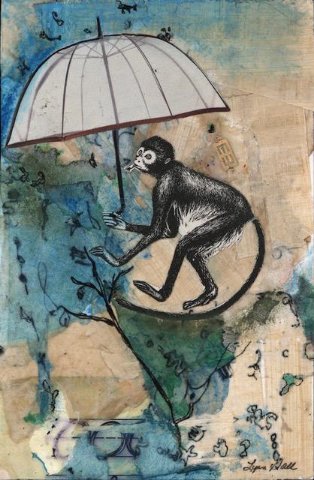 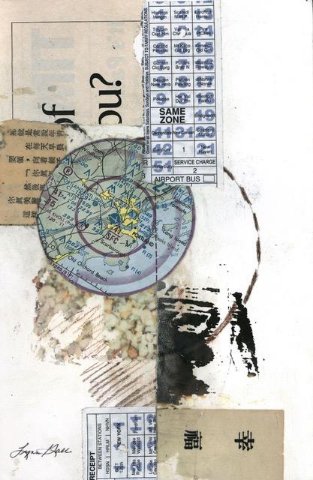 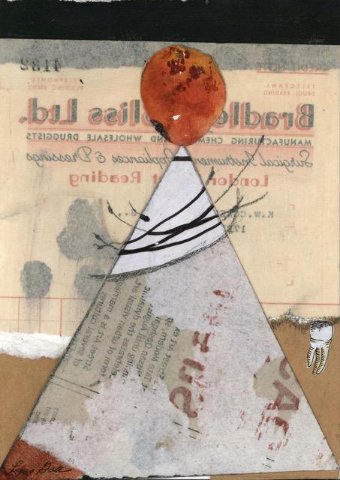 The Pinnacle of Orange 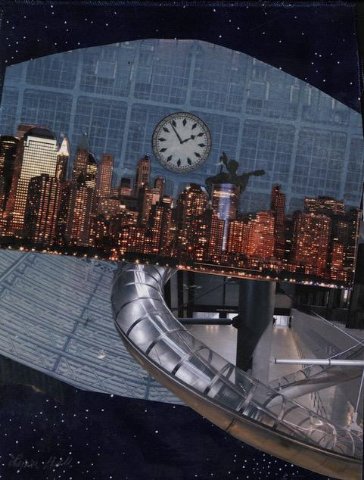 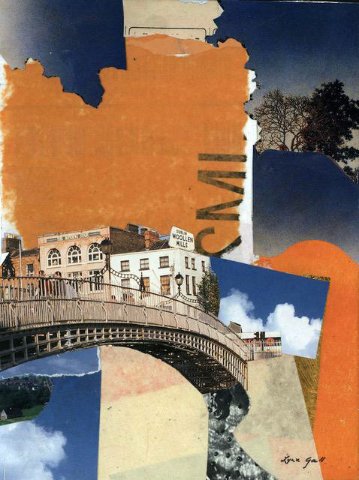 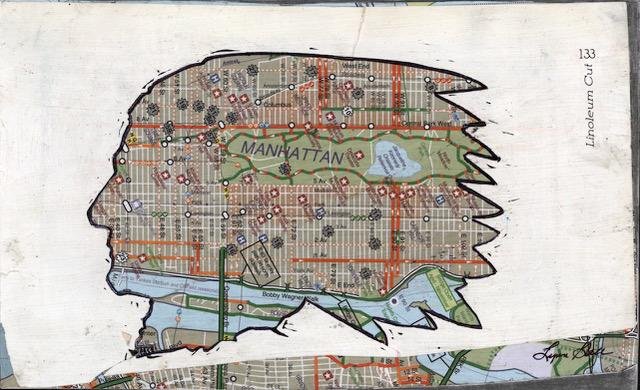 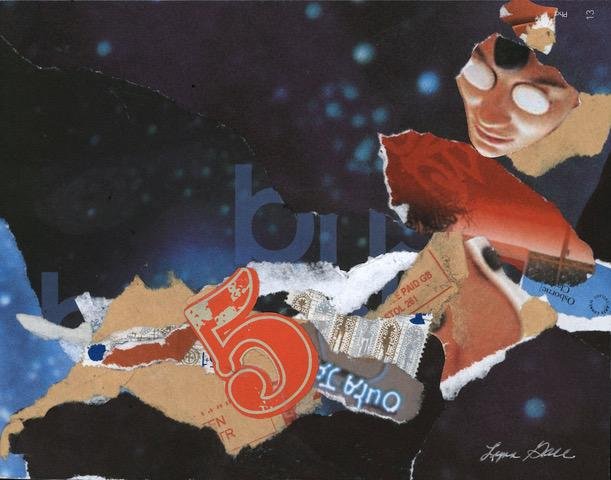 Lynn Gall, a world traveler, lives now primarily in New York City. She has described herself as a paper collector, scavenger, historian, maker, buyer, transformer, criminal…..artist - all in pursuit of her obsession! (Well, don’t take the ‘criminal’ point too seriously.) She has been for more than five years a member of a collaborative in NYC, where she has exhibited also her larger format work, exploring various forms of abstractions. And, having lived at least on two continents, collectors of her work are also international.

She started working as a collagist more than 15 years ago.  First, while living in Bristol, in the United Kingdom, in a flat with very little space to call her studio; in fact, she had not much more than a desk and some storage space for her ‘amassed’ material. Well, her current NYC apartment space is not much bigger, yet she has managed to create hundreds of successful and imaginative collages that are less than 10”x10” in size.

In 2017 she began working in earnest on her first book: Collage Brain – Insights, Ideas, Inspiration, which she published two years later. She enlisted the editor, Susan McInerney, and professional book designer, Christina Bonesy Lewis, as well as like-minded artist-friends, who all contributed with feed-back to this very colorful hand book about the intricate steps of making collages. She lays it out in page by page including her specific thought-process and ideas for each work. She writes well, funny or witty and contributes a myriad of hints. The book is a hit and deserves promotion!

The above Motherwell quote was used by Gall in part five: Abstracts. Other sections are titled: Humans; Nature; Objects; and Architecture. Some of the works float between subjects. Many of them start by using a contemporary or older postcard, so the final size suggests hand-size pieces, yet applications are endless. Gall proposes materials such as hot or cold press water color paper, wood- or canvas boards, old (telephone) books, catalogs. She snagged boxes of sheet music some time ago, so imagine where all those pages could be used - whole, cut or ripped.

Different glues become necessary in the process and scissors, scalpels, and craft knives as well as a self-healing mat. She cuts tiny holes into one layer in order to replace one partial image with another, as in placing clouds behind tiny window frames. That demands micro tip scissors and a firm hand. Use good quality brushes, she writes; and, surely also imagination and inspiration!

She has given each small work a fitting, thoughtful, art-historical, or whimsical title and signed them as well. Of course, collages, mostly two-dimensional and the three-dimensional assemblages of the last one hundred years were created world-wide and have also been constructed in much larger sizes.

Her collages tend to head toward the surreal, as is nearly the norm for the art form. Here some titles: Pucker Up for Public Housing – the bald head of an older man with cut out, cold eyes and puckered read lips is placed in front of a prison-like, dark-brown-brick building and a NY-style public housing complex. That hit hard, whether here in the US or in the UK!

You Don’t Scare Me – A dark grey King Kong with his usual scary open mouth expression, in front of a dark New Yorker high-rise with window lights in one half of the piece, is juxtaposed to a bridge worker on a ‘high-wire’ as a small black-grey figure surrounded by air and a hazy distant background of The City. Light versus dark.

Dali Coast – a nod to Salvador Dali, who is probably the most quoted surrealist. A Dali-like half clock or half-moon obscures a flying person in the sky. Only small arms and one leg, some words are visible remnants of the person. Below, in the water, showing through an orange float, another half clock.  Then, piles of rocks in two locations complete the entire surreal scape.

Stunt Woman – quite amazing, since Gall just used two elements; a page from a book, featuring 19th Century buildings. It could also have been a Victorian postcard. She cut a slit into one window and the stunt woman shot out of it and a cannon!

Paparazzi – is a serious work that shows only an arm of an in-water-drowning celebrity. (Just remember, for example, Princess Diana holding a tennis racket in front of her face, pleading for privacy! That’s an image that can still haunt me.) Here, other elements are a ’shooting’ photographer, who is weight down by three cameras; a window; dark spaces; an inside turquoise frame and an outside frame made of cut-up money. Apparently, shredded money can be purchased on the internet by searching ‘shredded money.’ One of those excellent hints, as Gall calls them.

Heavenly – shows a fluid movement from right top left corner to lower left corner by a number of ripped pieces of paper in beige colors to reds and blues at the edges. The rest of the work is bathed in midnight blues and black and the dominant features are a partial mask (no eyes) and the number 5. It is pleasing to look at and ominous at the same time.

These are my interpretations and only one of the published images above, the last one, is shown in the photo series for this BFA article.

And, there are many more collages in this hand-book worth writing about. Gall is also an experienced teacher and offers a chock-full of suggestions and interpretations of the medium throughout. It is worth its price for beginners and practitioners!