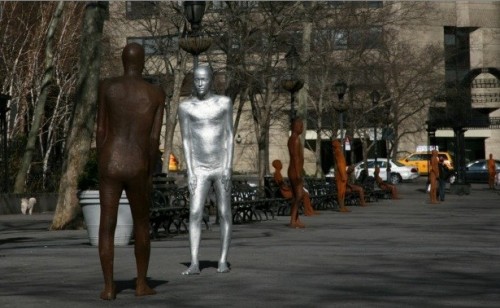 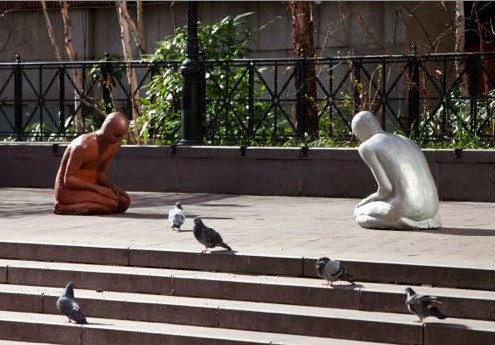 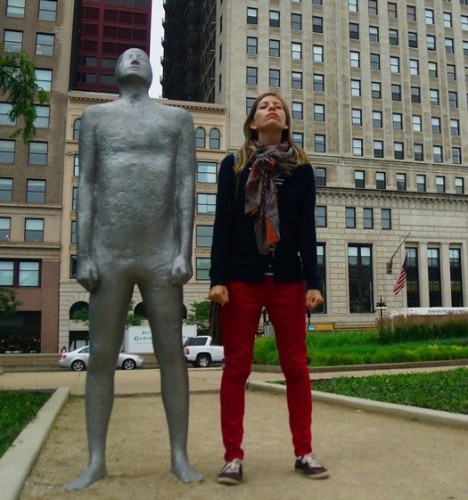 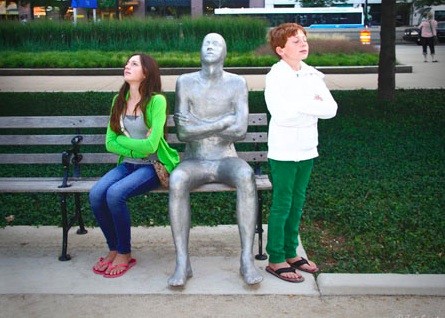 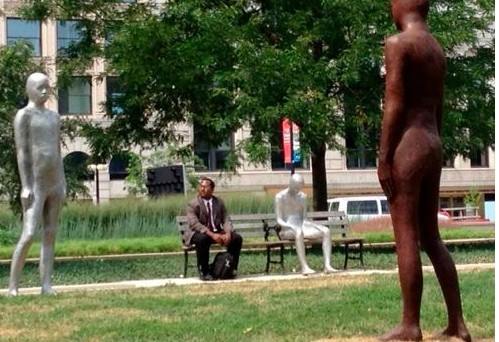 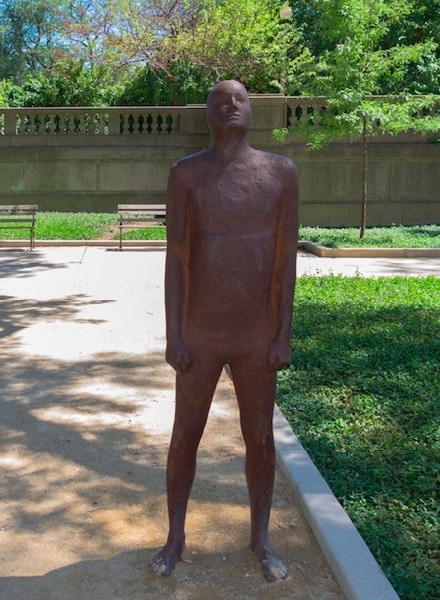 In Grant Park, Chicago, where Obama was greeted on election night 2008, the Georg Solti garden is filled with iron and aluminum pairs of statues suggesting silent conversations, quiet meetings, sometimes standoffishness.  Some seated figures invite you to sit beside them, which people wandering through the garden do.  They are the creation  of Icelandic artist Steinunn Thórarinsdóttir and first appeared in Dag Hammarskjöld Plaza at the United Nations.

Perhaps colored by daily news of racial strife in the US, it is easy to see the iron figures as black people, and the aluminum as whites.  People of all colors wander through this section of the park.

The Chicago Parks System had this to say about the installation:

"The pairs mirror each other. The difference of materials provides a striking visual contrast, highlighting the forms as both familiar and alien within the social space of the park. Modeled after Thórarinsdóttir’s oldest son, the static, life-sized figures allow park visitors to engage with them by crossing the invisible “borders” they create.â€¨â€¨“Using human figures makes it possible for people to relate to this work very directly, but at the same time the characteristics of the figure are reserved and anonymous— they don’t force themselves on the viewer,” said Thórarinsdóttir.

"The show reflects on the opposites of human existence–on division but also on unity.”â€¨â€¨Originally installed in Dag Hammarskjöld Plaza, near the United Nations headquarters in New York, “Borders” was created specifically for the active, vibrant public space that held frequent social gatherings from political rallies to farmers’ markets. Thórarinsdóttir chose its Chicago site, similarly, as a populated space bracketing frequent cultural happenings from the nearby Art Institute of Chicago and Millennium Park.“

The Grant Park Conservancy is proud to play a role in bringing Ms. Thórarinsdóttir’s fascinating, highly interactive sculpture to Chicago,” says Conservancy President Bob O'Neill.  “A key component of our mission is to nurture Grant Park as an environment conducive to the arts and education.  ‘Borders’ invites and intrigues the viewer, allowing them to examine and appreciate the artistry and craftsmanship, while simultaneously querying into why the artist has positioned them as they are.“â€¨â€¨

“Chicago is one of the world’s leading capitals for sculpture, and it has long been a goal of mine to have a piece prominently displayed in the city,” added Thórarinsdóttir.  “I am grateful to the Chicago Park District and the Grant Park Conservancy for inviting me to place ‘Borders’ in such an ideal setting: a perfect bookend to the world class sculpture in Millennium Park and the Art Institute’s exquisite collection.”

â€¨â€¨Steinunn Thórarinsdóttir (b.1955) studied at the University of Portsmouth Fine Art Department in England and the Accademia di Belle Arte in Bologna, Italy. She has been working professionally for more than 30 years and has exhibited widely in Europe, Japan, the United States, and Australia. Her works are in private, public, and corporate collections around the world. She has completed commissions at Leifur Eiríksson International Airport, Iceland, and the two-part memorial Voyage in Hull, England, and Vik, Iceland among others. Thórarinsdóttir recently finished a nine-meter high sculpture for the University of Aberdeen in Scotland. Her exhibition “Horizons,” which was first exhibited in early 2007 at the Katonah Museum, New York, has since traveled to six venues. Among them are the Dixon Museum and Gardens, Memphis, Tennessee; the Georgia Museum of Art; and the Nathan Manilow Sculpture Park, Illinois. Thórarinsdóttir lives and works in Reykjavik, Iceland.