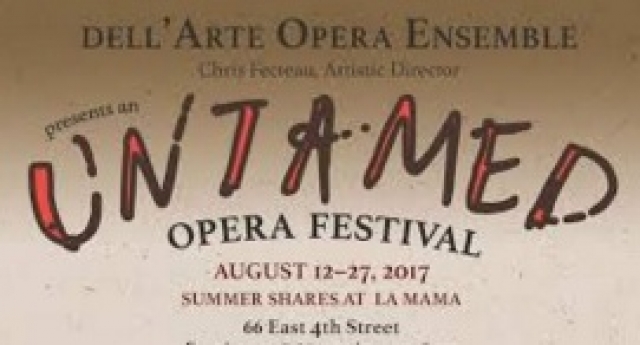 Christopher Fecteau founded Dell'Arte Opera Ensemble fifteen years ago.  His commitment is to young opera singers on the cusp of a career.  Thirty percent of the singers who have passed through his performance program have landed up in the biggest, arguably most important opera houses across the globe.

What they gain from the process of production with Dell'Arte is the experience of excellence.

The mentoring layer of Dell'Arte has always been present.  It became a formal part of the mission in 2016. Mentoring is the next step after learning from a teacher. Now both the mentor and mentee are artists, one beginning his career, the other experienced. We the audience gain much pleasure from an even focus on all aspects of the opera form.

First and foremost is of course the singing.  Whether the plethora of wonderful voices has always been around, hidden by lack of stage space, or if there is a burst of talent in the millennial pool, each and every singer we heard during the course of the festival has a special voice.  Performances are full of conviction, character-shaping and love.

Taking a space and using it well is a trick that requires sleight of hand.  The main stage at La Mama is set in high ceilings.  A balcony surrounds the stage area.

Two large boxes formed the basic set of Untamed Scenes. They could be moved around depending on the scene requirements.  Two tall dividers set the acting area apart from backstage.

Costumes suggest both character and period.  They are often bright and fun.  Lighting provides scene mood and also acts as a scene divider.  Movement, often bordering on choreography, allows the singers to inhabit their roles and also to underline story elements.

Brittany Goodwin in Benjamin Britten's A Midsummer Night's Dream is a particular delight.  She is the layer between the singers and audience, floating around the stage, observing and commenting with mimed gestures of surprise, horror and jest.

In Francois Poulenc's Dialogues des Carmelites (fully produced by the company in 2012), Allison Gish opens as the Old Priestess and her rich mezzo memorably drew the character.

Mozart is the measure of a singer.  Jingye Xu and Sophia Mortensen stood out as Sesto and Annio in a scene from La Clemenza di Tito and another from Idomeneo.

After repeated exposure, it is clear that Carmen is an opera warhorse because it is wonderful.  Sophie Dephis sang the title role with sass and attitude.  Her support was superb throughout.

Acting was so good you dove right into the voices.  In particularly challenging roles, Kirsti Esch and Elyse Kakacek etched their characters.

Graduating from student to mentee means that the artist is now an equal, guided by more experienced artists.  Dialogue between the creative team and mentors gives us sets which maximize space.  Singers seem particularly comfortable, even when challenged by difficult roles. The use of the hands, which singers tend to see as comforting assistants, was striking.  They never seemed a nervous addition, or a way of drawing out the voice. Instead they drew character.

Untamed Scenes was conducted by Eldred Marshall, a first-rate pianist who has been working to expand his skills repertoire to conducting.  Christopher Fecteau mentored him for two months.  His take was always apt, sensitive and tending to both the accompaniment and singers.

As a launching pad for talent that provides a wonderful evening of opera, you can't beat Dell'Arte.