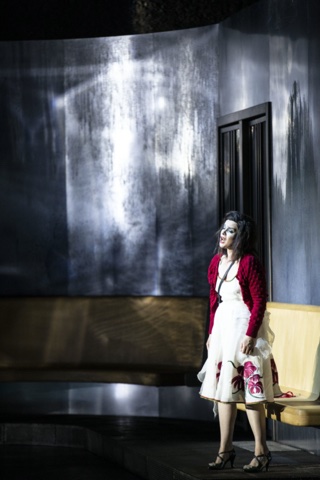 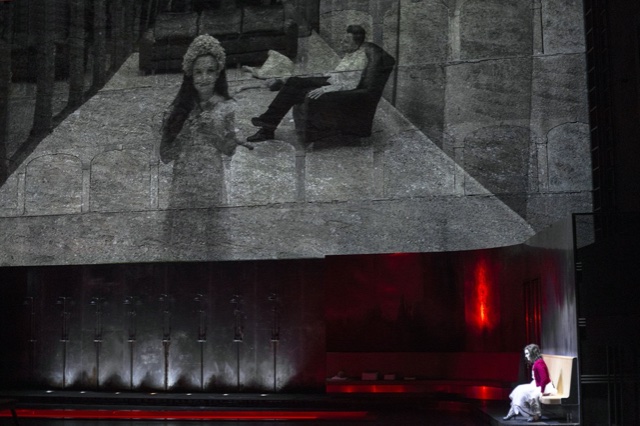 Hone life in a glass house projected on a wall of stone Elektra, Salzburg 2021 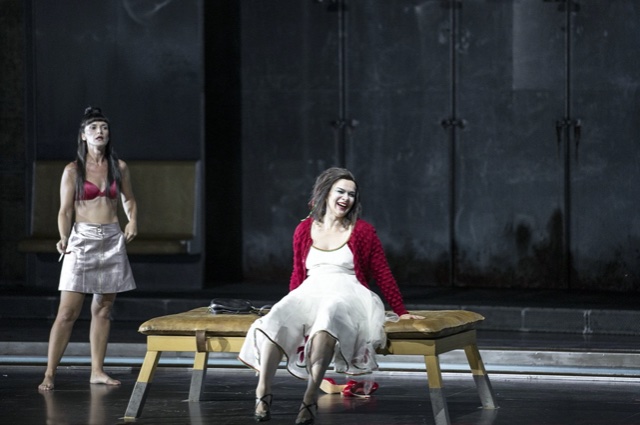 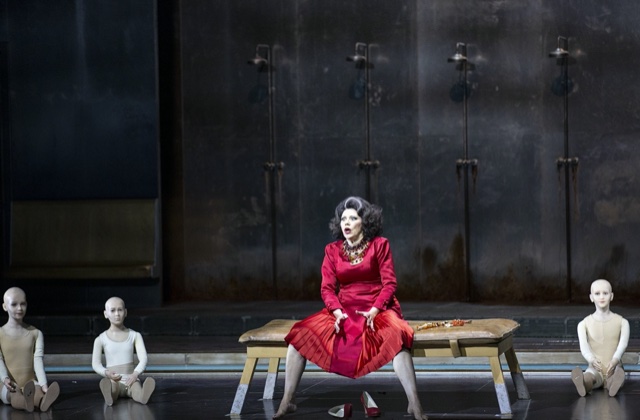 A mother and her children in better times. 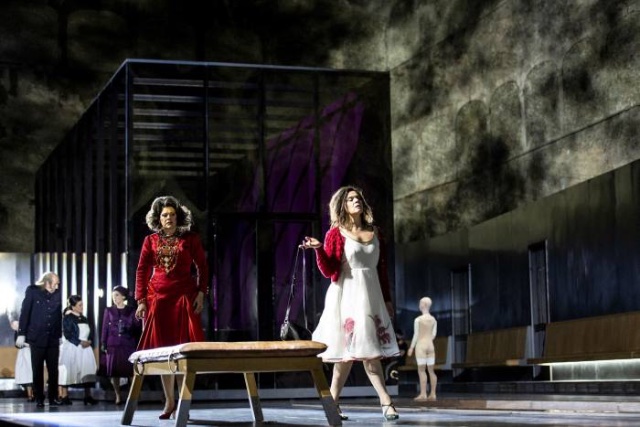 The glass house, the sisters, the children and Orestes' journey Elektra, Salzburg 2021 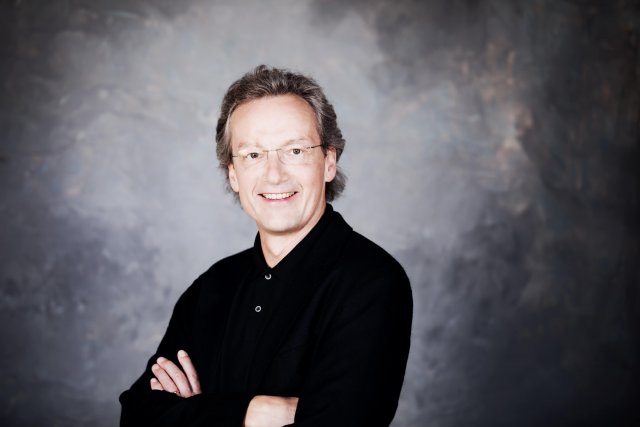 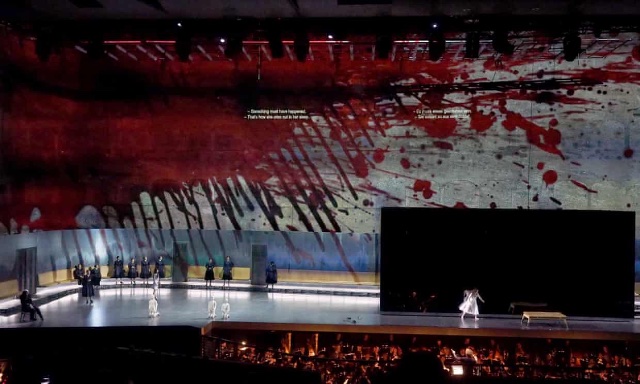 People who live in glasshouses should not kill.

Elektra, the opera, was first produced in Salzburg at the Grosses Festspielhaus in 1964, when Herbert von Karajan both conducted and stage directed. The cast then was as glowing as the cast is this year. Astrid Varnay was Clytemnestra; Hildegard Hillebrecht, Elektra, and Martha Mödl, Chrysometis.

While Hugo von Hoffmansthal's play was written as Freud’s ideas about hysteria were capturing Europe’s attention, this telling becomes a new founding myth because Elektra’s ‘madness’ is real.  Her father has been murdered by her mother and step-father. She is possessed by the idea that vengeance must be had. When her mission is accomplished, she too dies, paving the way for peace to be restored.

The three singers at Salzburg this year are Ausrine Stundyte as Elektra, Tanja Ariane Baumgartner, Clytemnestra, and Asmik Grigorian, Chrysothemis. They engage us emotionally, through music, gesture and physical presence.

Franz Welser-Möst, conducting the Vienna Philharmonic, is trusted by the Strauss estate.  We can see why. The music is at once lyric and harsh. It matches the moments unfolding on stage. The singers are encouraged to let their lush voices loft, even when they are experiencing extreme anguish.

Ausrine Stundyte debuted the Elektra role in Salzburg last year. She is a more subtle Elektra than we are accustomed to, and this works very well. Her softness arouses sympathy. When she shrieks, we can feel her pain.

Tanja Ariane Baumgartner opens the evening declaiming the words of Hugo von Hoffmansthal’s underlying play (or perhaps from Oresteia). Capriccio, a later Strauss opera, makes the composer's interest in the relationship between words and music clear. Letting Clytemnestra’s words stand alone at the start, unadorned and provocative, guides the audience into the musical drama. A musical drama this is, fixated on the lead character, unleashing a new myth into our culture.

Stundyte’s Elektra role, as crafted by the singer, Welser-Möst, and Krzysztof Warlikowski, is not a victim of hysteria. She is a woman beleaguered by the notion (correct) that her father has been killed and his murderers are on the loose.

In Warlikowski’s take, the criminals are actually contained in the primal home, a glass house which we can from time to time peer into. At the opera’s start, the interior is doubled in video projections on the wall at the rear of the stage.

Felsenreitschulehaus was built into the rock already carved to create at 17th century cathedral in town. Warlikowski makes use of the back rock wall to punctuate his points. Later, in moving black blotches and splats which traipse from stage right to left, Orestes' journey home may be suggested. The opera’s conclusion is dripped in blood infested with flies, pollution confirming our sense of horror and disgust. Kamil Polak provided the video, and Felice Ross, lighting.

Warlikowski is a special opera director, because he always honors the composer’s intentions. He does this in ways that are satisfying for the modern viewer. In addition to the use of video and lighting play with colors, he often doubles characters, in this case effigies of  the three siblings who survive their mother’s regicide.

While the siblings Orestes and Chrysometis are not on stage long enough to develop, Strauss makes our understanding of their characters clear in the music, whose details Welser-Möst, brings forward in every musical measure. Characters here are not one-dimensional.

Asmik Grigorian (Chrysometis) is one of the opera world’s great hopes for the future. She has never studied drama, yet she has an inherent sense of stage presence and how to make herself felt, both in physical actions and in her voice. She uses great intelligence and feeling, whether she is declaiming, questioning her sister, making suggestions, or abandoning the cause. Her voice is bright and flowing. Spiked heels do not inhibit her, as she moves between the world of the glass house and the exterior courtyard. She believes in the comfort of a man, and helps us understand her attraction when she strips to a red sports bra.

Costumes are neutral in time, classic. Colors indicate the blood-letting. Only Elektra’s flying skirt, Monroe-like,  gives us a present sense that Elektra is getting her sister’s message.

Baumgartner can be tender as the mother, which encourages complex feelings about her.  She can be maternal, yet she is also deeply defensive and tough.

Christopher Maltman is fine as Orestes. Michael Laurenz as Aegisth seems more creep than king, just as he should be.

This is a women’s opera and an opera centering on Elektra.

Warlikowski gives our eyes much to record. The set is created by Malgorzata Szczesniak, his wife and regular partner in staging. The reflected waters of a pool play on surfaces. Hoffmansthal plays with water, particularly the ocean, which will press upon Elektra after her mission is accomplished. Orestes washes his feet, a Christian act, as he comes home. Curious that cleansing after his journey prepares him to do the filthy deeds his sister insists upon.

Doubling is a technique Warlikowski uses to give us a sense of time’s passing and the complexity of character. He uses it often in Elektra. Clytemnestra is a grey-haired widow in the glass house and a very sexy, beautiful woman in red when she is in the courtyard.

Most striking are the three modeled effigies representing the siblings, which are on stage for the entire performance, reminding us that these now grown children once lived in a peaceful household. This makes us feel their rage provoked by a murderous disruption more intensely.

Welser-Möst conducts the work with extreme sensitivity to the leitmotifs that attend characters and to the emotional swings and swirls. The Vienna Philharmonic responds. The frenzied dance which concludes the opera is left in the orchestra and the video projections. Elektra lies on her back, waving her legs in an erotic/fetal position. She does not dissolve. She remains in the memory, powerful as a woman of action.

The audience in Salzburg is made up of opera lovers who know their literature. The cast would not have been allowed to leave the stage if they had not decided to leave for good as rapturous applause for this superb production continued.