Vasily Kandinsky: Around the Circle

At the Solomon R. Guggenheim Museum 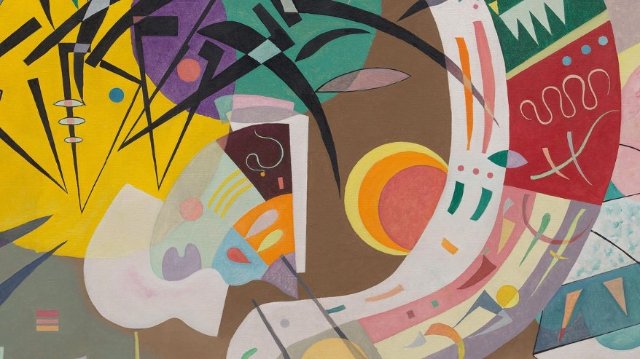 From October 8, 2021, through September 5, 2022, the Solomon R. Guggenheim Museum presents Vasily Kandinsky: Around the Circle. Drawing from the Guggenheim’s exceptional collection of works by Kandinsky, the exhibition features approximately eighty paintings, watercolors, and woodcuts, as well as a selection of his illustrated books, spanning the artist’s earlier years in Russia and Germany and through his exile in France at the end of his life. The presentation, installed along the midsection of the museum’s spiral rotunda, reconsiders Kandinsky’s career not as a fixed path from representation to abstraction, but as a circular passage through persistent themes centered around the pursuit of one dominant ideal: the impulse for spiritual expression.

Vasily Kandinsky: Around the Circle is organized by Megan Fontanella, Curator, Modern Art and Provenance.

Vasily Kandinsky (b. 1866, Moscow; d. 1944, Neuilly-sur-Seine, France) is recognized as a major artistic innovator. He was among those who advanced nonrepresentational modes of art-making, to lasting effect. Uprooted time and again, the artist’s stylistic evolution was intimately tied to his sense of place and his meaningful intersections with artists, musicians, poets, and other cultural producers who shared his transnational vision and experimental bent.

Vasily Kandinsky: Around the Circle portrays how, in seeking to free art from its ties to nature and representation, Kandinsky remained committed to exploring a subject matter based on what he called the artist’s “inner necessity.” Persistent themes—from memory and identity to sensorial experience and spirituality—are traced in the work of an artist whose theories and works continue to resonate today.

Kandinsky’s groundbreaking career unfolds in chronologically reverse order proceeding upwards along the Guggenheim’s spiral ramp. The exhibition begins with the artist’s final chapter, set in France, when the natural sciences and Surrealism, as well as an abiding interest in Russian and Siberian cultural practices and folklore, informed his biomorphic imagery and prompted recurrent themes of regeneration and metamorphosis. Arranged on the fourth level, works from his decade at the Bauhaus, a German school of applied art and design, manifest Kandinsky’s conviction that art could transform self and society. This body of work reflects the revitalization of his abstract style following his renewed contact with the Russian avant-garde in the late 1910s. The artist increasingly adopted geometric motifs, and in particular the circle, as a vehicle for his emotive language. The final section of the exhibition, positioned towards the apex of the rotunda, examines Kandinsky’s earliest paintings, made while he was living in or around Munich. There he participated in heightened vanguard activity across multiple disciplines. In time the artist interrogated the expressive possibilities of color, line, and form, inspired in part by contemporary music. At every turn Kandinsky responded to his environment and developed new ways to probe the spiritual in art.

Presented concurrently with Vasily Kandinsky: Around the Circle is a series of solo exhibitions on the lower levels 1–2 of the Guggenheim rotunda that features the work of contemporary artists Etel Adnan, Jennie C. Jones, and Cecilia Vicuña.

Vasily Kandinsky was born on December 16, 1866, in Moscow. From 1886 through 1892 he studied law and economics at the University of Moscow, and in 1889 he undertook an ethnographic expedition in the Vologda province in northern Russia. He later declined a teaching position in order to study art in Munich with Anton Ažbe from 1897 to 1899 and at the Kunstakademie with Franz von Stuck in 1900. Kandinsky taught in 1901–03 at the art school of the Phalanx, a group he cofounded in Munich. One of his students, the German artist Gabriele Münter, would be his companion until 1914. In 1902 Kandinsky exhibited for the first time with the Berlin Secession and produced his first woodcuts. In 1903 and 1904 he began his travels in Italy, the Netherlands, and Tunisia and made visits to Russia. He showed at the Salon d’Automne in Paris from 1904.

In 1909 Kandinsky was elected president of the newly founded Neue Künstlervereinigung München (NKVM), whose first show took place at Heinrich Thannhauser’s Moderne Galerie in Munich later that year. In 1911 Kandinsky and Franz Marc formed Der Blaue Reiter (The Blue Rider), a loose confederation of artists, writers, and musicians, and began to make plans for Der Blaue Reiter Almanac, although the publication would not appear until the following year. Kandinsky’s seminal treatise On the Spiritual in Art was published in December 1911. He and Marc withdrew from the NKVM that month, and shortly thereafter the Blaue Reiter group’s first exhibition was held at the Moderne Galerie. In 1912 the second Blaue Reiter show was held at the Galerie Hans Goltz, Munich. Kandinsky’s first solo show was held at Der Sturm gallery in Berlin in 1912. In 1913 one of his works was included in the Armory Show in New York and the Erste deutsche Herbstsalon at the Der Sturm gallery in Berlin. Kandinsky lived in Russia from 1914 to 1921, principally in Moscow, where he held a position at the People’s Commissariat of Education.

Kandinsky began teaching at the Bauhaus in Weimar, Germany, in 1922. In 1923 he was given his first solo show in New York by the Société Anonyme, of which he became vice-president. Lyonel Feininger, Alexei Jawlensky, Kandinsky, and Paul Klee made up the Blaue Vier (Blue Four) group, formed in 1924. Kandinsky moved with the Bauhaus to Dessau in 1925 and became a German citizen in 1928. After the Bauhaus closed under pressure from the Nazi government in 1933, Kandinsky settled in Neuilly-sur-Seine, near Paris; he acquired French citizenship in 1939. Fifty-seven of his works were confiscated by the Nazis in the 1937 purge of so-called “degenerate art.” Kandinsky died on December 13, 1944, in Neuilly.

Admission: Adults $25, students/seniors (65+) $18, members and children under 12 free. Open Thursdays through Mondays from 11 am to 6 pm. Pay What You Wish hours are Saturdays from 4 to 6 pm, with free admission on Saturday on the House, offered once each month. Timed tickets are required and available at guggenheim.org/tickets. Explore the Guggenheim with our free Digital Guide, a part of the Bloomberg Connects app. Find it in the Apple App Store or in the Google Play Store.

The Guggenheim is implementing health and safety measures in consideration of visitors and employees. In compliance with New York City mandate, COVID-19 vaccination is required for admission to the Guggenheim for anyone who is eligible. Face masks are mandatory inside the museum for anyone over the age of two. These new policies should be reviewed in advance of a visit; they are posted on COVID-19 Safety Measures: What to Expect When Visiting.