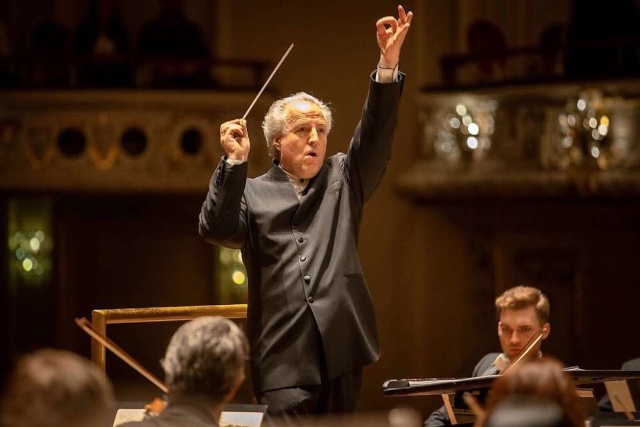 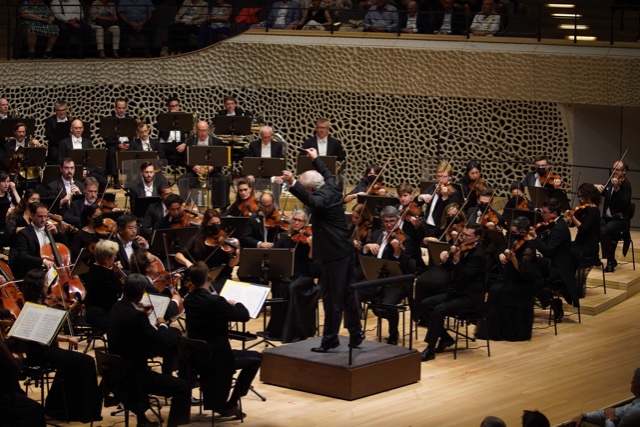 At the Elbphilharmonie. Note the texture of the walls courtesy Herzog and deMeuron and Nagata Acoustics.

Manfred Honeck and the Pittsburgh Symphony have developed a specialty: revealing the texture of sound. Texture in music is the way in which tempi, melody, and harmonies are combined in a composition. It describes the complexity and amount of layers a piece of music has. A thick texture may contain many layers of instruments.

In a concert at  Elbphilharmonie, an event in the orchestra’s 75th year of touring, they displayed daring and diverse sounds not often heard. The Maestro and the musicians find buried clues to the balanced mix of rhythms, dynamics in detailed performance directions.

Shimmering sound masses of György Ligeti's Lontano start the evening, a preview of what is to come. Ligeti's idea was to make texture as much of a driving force in musical architecture as pitch or rhythm. He develops an  incredibly dense pile-up of musical lines so that make you even more aware of an ever-changing amorphous cloud of sound than the movement of individual instruments.

Lontano is unlike any other composition Ligeti wrote. Each of his compositions is unique. He was opposed to what he called “planification.” Apparently his experience as a Hungarian Jew whose father and brother were killed at Auschwitz, made him fear orderly structures which could be repeated. Ligeti said, "I am extremely far away from messianic thinking."

Lontano, like many of Ligeti’s pieces, is short. The small scale is clearly cloaked in a vacuum. Honeck calls attention to the silence of a vacuum. He often gives his beats in silence. The twilight zone between silence and sound is detailed.

‘Lontano’ is the Italian word for 'in the distance.' The music is at first very abstract, an  almost hazy scene. Glittering themes on the woodwinds and strings turn eerie. Unresolved tension creates an uneasiness, as familiar harmonies are engorged in ever-evolving textures. The ten minute preview is not a condensation but rather an intensification of the sound experience  It still shocks. Honeck and the orchestra are warming up for grand pieces of dazzling texture:  Ravel’s Piano Concerto in G major and Gustav Mahler’s First  Symphony.

Ravel had a quite different approach to the textures he was going to display in his only piano concerto for two hands. He found most composers wrote “against the piano” in concertos. He clearly writes “for the piano.”  In addition to a solo piano, this piece is scored for flute, piccolo, oboe, English horn, clarinet, E-flat clarinet, two bassoons, two horns, trumpet, trombone, timpani, percussion, harp and strings.

He would write: “The music of a concerto should, in my opinion, be lighthearted and brilliant, and not aim at profundity or at dramatic effects.”  Simple we know does not mean simplistic.  It is not surprising to learn that the gorgeous slow movement of the concerto was painstakingly written by Ravel two measures at a time.

Soloist Hélène Grimaud began with a rip-snorting whipcrack across the keyboard, and accepted, as so many soloists have, the fortissimo and percussive ninths with which Ravel replaced the original pianissmo trills at the conclusion. Grimaud is a perfect compliment to the orchestra in her display of the varying textures of this work.

After a pause, we are offered Gustav Mahler’s First Symphony. A master of texture, Mahler throws as many varieties at us as he can. Yet it is Lontano that springs to the ear again. Symphony No. 1 is about distance. A small group of instruments sound from a space that is beyond the Elbphilharmonie stage. We hear the hunt, and military fanfare, common musical themes. We are with them at some distant periphery, moving and dramatized.

Honeck and the orchestra proceed to find all the richness the composer does. Sobriety is so often the texture of writing about Maher that we forget the humor. Downtown, Charles Ives’ like city squares and organ grinders. Mahler wanted music to move us and in this performance we get stratospheric moves. Bruder Martin, the funeral March for German Hamburg. The clashes and crashes of symbols and piccolo punctuations. Honeck brings more punctuation to textures than most conductors do. These serve to make us only more aware of the textures they interrupt, even for an instant.

This tour introduces European audiences to elements that the Steel City’s residents have come to appreciate: soundscapes presented in their infinite variety with surprising yet apt additions serving to enhance the works the Symphony performs.

The audience insisted on encores. We were rewarded with  Johan Strauss, Die Libelle (The Dragonfly) and bid farewell with Richard Strauss' final Waltz from Der Rosenkavalier.