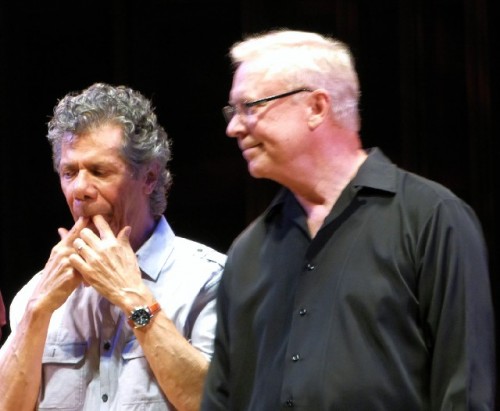 Chick leads the cheering during a standing O at Tanglewood. 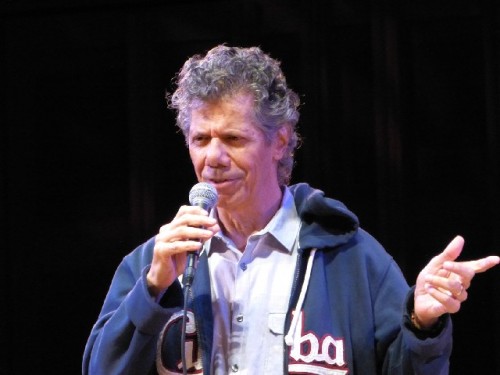 Explaining the difference between Boston and Chelsea. 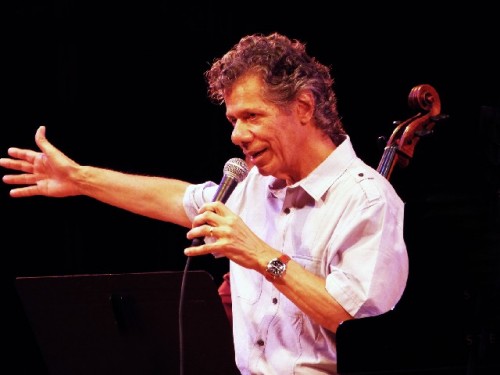 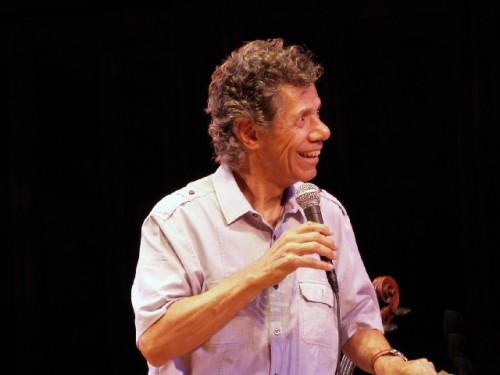 Enjoying a laugh with the audience at Ozawa Hall. 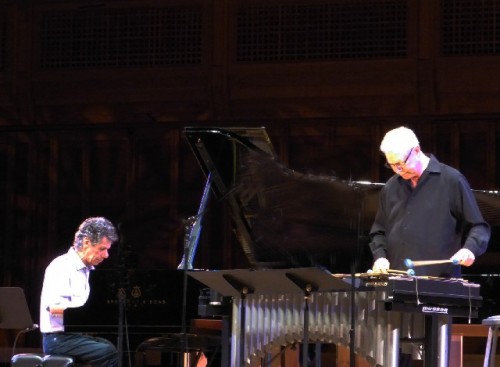 Chick and Gary have performed together for forty years. 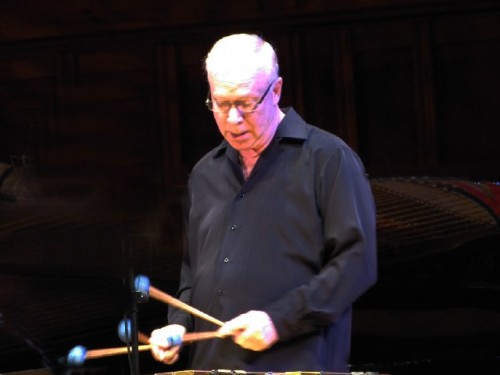 Gary is known for his unique double malletts technique. 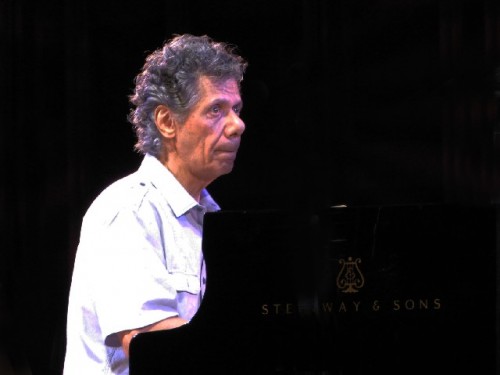 Chick at the Steinway.

Amazingly, along with many  other projects and busy schedules two cats from Boston, pianist Chick Corea, Chelsea actually, and vibraphone player, long time Berklee College of Music faculty member, Gary Burton have played and toured together for some 40 years.

Corea, looking fit and full of vinegar, sans glasses, at 70, and Burton who hits that number in 2013, opened last night at Tanglewood with a stunning set of duets. It was the fourth and final night of jazz programming this year which also featured Chris Botti, The Ebene Quartet, Wynton Marsalis Quintet and the Christian McBride Trio.

In a program that lasted two hours with an intermission, during the second set, they were joined by the Harlem String Quartet which features Ilmar Gavilán, violin; Melissa White, violin; Juan Miguel Hernandez, viola; and Paul Wiancko, cello.

For their sixth CD, Hot House (a Tadd Dammeron bop classic), they have recorded the standards which Corea commented “We grew up with.” The tracks include "Can't We Be Friends" "Eleanor Rigby" "Chaga de Saudade" "Time Remembered" "Hot House" "Strange Meadow Lark" "Light Blue" "Once I Loved" "My Ship" and "Mozart Goes Dancing."

They performed several of these tunes in an evening that demonstrated their range, diversity and stunning chops.

The combination of piano and vibes evokes the understated chamber jazz of the Modern Jazz Quartet which included pianist John Lewis with the vibes of Milt Jackson. Bass player, Percy Heath, and the oh so subtle and subdued drummer, Connie Kay completed the group.

One may only speculate how Corea and Burton would sound with bass and drums. But without those instruments, and a more rounded sound, a listener is focused on Corea’s endlessly fluid, long, bell like, embellished lines; a filigree of overtones and nuances. There is compelling synergy as Burton both follows Corea’s leads with his renowned double malletts technique as well as exploring his own improvisational excursions.

Where Lionel Hampton, a converted drummer with Benny Goodman, developed a percussive, two mallett, style of swinging accents, Burton, with his four mallett, shading techniques evokes a more complex range from the instrument. Burton's playing may well be described as pianistic and well matched to Corea's cerebral but lyrical approach. Notably, all of the music was arranged by Corea.

It was the first night of a tour with new material. For this performance they were reading charts but that will likely change in the weeks that follow as the arrangements become more familiar.

While Corea is in the top tier of jazz artists of his generation the music has always been cerebral, complex, with a fusion of styles and influences, particularly flamenco and Spanish tempos, as well as classical and symphonic forms. Corea wears a musical coat of many colors and is capable, on any given occasion, of assuming multiple musical styles and identities.

In the duos with Burton he is at his most bare bones, hard swinging, no nonsense, straight up and accessible. He has also performed and recorded memorable duets with pianist Herbie Hancock.

Both Burton and Corea took turns introducing selections which lasted about fifteen minutes each. Corea told the audience that Tanglewood, a too rare appearance, with its proximity to Boston was almost a local gig. He tells people he’s from Boston, now living in Florida, but actually he’s from working class Chelsea. Even after years of Global travel he still has that flat toned accent.

They opened with Corea’s “Live Fest.” Then they dipped into his passion for Flamenco with his ¾ timed “Allegra.” Before playing they demonstrated the complex beat by slapping on the piano and clapping. One wanted to shout out an “Ole” before they settled into the complex and compelling polyrhythm. It made me think of my favorite Corea album My Spanish Heart.

Explaining the concept of the set of standards in Hot House Corea announced that they would play a selection "Can't We Be Friends" associated with the greatest of all jazz pianists. There was a moment of suspense before he identified Art Tatum. Of course. That makes perfect sense as Tatum was the master of fast, legato playing with a smoothness of texture and virtuosity that remains a benchmark. His greatest disciple was Oscar Peterson and one can trace that lineage through aspects of Corea. He shares their musical horror vacui. While it may inform his tone and style Corea is a more complex musician than either Tatum or Corea.

When it was Gary’s turn to introduce a song he too was coy inviting the audience to guess what they would be playing. It took a while as they stretched out on the changes before rendering the familiar refrain of “Eleanor Rigby” by the Beatles. It was fascinating to hear the wonderful music of the Beatles rendered by superb jazz musicians.

Corea informed us that he is a relatively recent “convert” to the Fab Four largely through the influence  of Burton. “During the 1960s I was mostly listening to Coltrane” he explained. How exciting it would be to have them do an entire Beatles album which would just bust the charts.

Early on, Burton toured with the Stan Getz quartet before leaving to form his own group. His place in the group was taken by a young Corea. He was “discovered” by Miles Davis who for a time also had Keith Jarrett in the group.

After a gig by Miles at Lennie’s on the Turnpike I interviewed him in the tiny dressing room. The seminal album Bitches Brew, which so changed the landscape of jazz, had just been released. Miles was striving for a fusion, electric sound. That night the group included both Corea and Jarrett, (playing early Fender keyboards which Keith hated), Michael Henderson, electric bass, Jack DeJohnette, drums, Gary Bartz, horns and John McLaughlin sitting in on guitar. Earlier that week, I heard the group (minus McLaughlin) perform at Harvard Stadium.

In that raspy whisper Miles said to me “Did you hear the gig tonight? I have a problem and you can help me. I have Chick and Keith but I can’t carry them both. Who should I get rid of ?” It was a Solomon question and I demurred. “I’m going to have to fire Chick. Keith gives me more.”

With a boss nova flourish Corea and Burton played a Getz standard “Chega de Saudade (Once I Loved)” by the beloved Brazilian composer Antonio Carlos Jobim.

For the second half of the program they performed arrangements with the Harlem String Quartet. There is a long tradition of “With Strings” in jazz starting in the 1950s with memorable albums by Charlie Parker, Dizzy Gillespie, and Billie Holiday. These complex, symphonic arrangements were explored by the Woody Herman Band (Stravinsky’s Ebony Concerto) the classically scored arrangements of Alec Wilder (conducted by Frank Sinatra) and Annotation of the Muses  by Stan Kenton’s arranger/ composer Johnny Richards. There were the collaborations of Miles Davis and Gil Evans as well as the many explorations of classical forms by Duke Ellington.

Considering that piano is also a stringed instrument it was interesting to hear the quartet with vibes providing another, percussive element.

The collaboration began when Corea related that he was given an award. The Harlem String Quartet was a part of the program and performed an arrangement of his music. Working with them is relatively recent and at the last minute they cut a track “Mozart Goes Dancing” which they performed last night and is included on Hot House.

For the second set there was more of Corea as composer and arranger than improviser. While more rich and complex there seemed less wiggle room. They opened with Corea’s “Overture” followed by his “Waltz.”

Then Corea introduced a standard by Thelonious Monk “Round Midnight” which has been performed and recorded by many jazz artists including Miles Davis and Dizzy Gillespie in particularly memorable versions. I’m not sure that Corea is the right fit for Monk. His piano was known for a percussive, clustered, chunky, hammering attack, eccentric chords and meandering, tentative, funky runs.  The rest or silence was an important aspect of his sparing, less is more approach. Arguably, Corea is too refined and sophisticated for Monk’s primal scream, tortured angst and strident passion.

Corea seemed to miss the point by filling all the spaces in "Round Midnight" squeezing out the oxygen and breathing room.  It begs the question of the guts and blues tradition of Monk and the next generation of conservatory trained musicians like Corea.

While Corea is a great player, a genius, don’t get me wrong, but, he ain’t Monk. While Corea is tasteful and profound; guys like Monk, Mingus, Miles, Ornette, Shep, Sonny, Max, Mulligan, Chet, Horace, Dexter, Getz, Cecil, Tristano and Trane, were monsters. Wild and crazy cats.

It reminds me of that best selling, seminal Dave Brubeck 1954 album Jazz Goes to College. Today man, Jazz Is College! Which is kind of a good and bad thing. Sure the music has to morph, change and progress but I need the funk man. Too much head and not enough heart.

As George Clinton would say “Give me the one.” Uh huh. Don’t tune that piano too fine. Whatever happened to “Good enough for jazz?”