Chopin in Paris by Hershey Felder 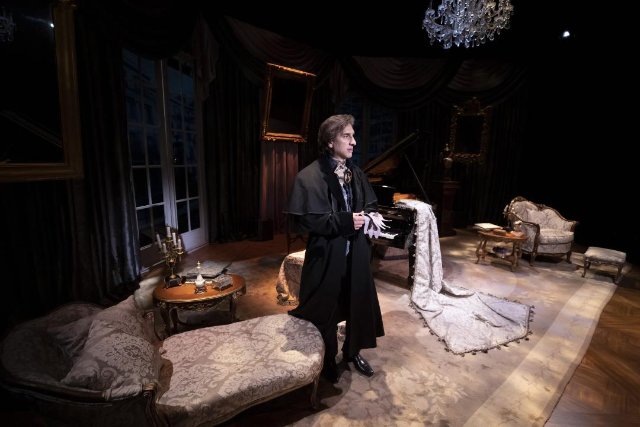 Hershey Felder has forged a special niche in live entertainment.  He produces one-man shows about music composers whom he portrays while performing their music on the piano.  He has depicted Tchaikovsky, Gershwin, Beethoven, Irving Berlin, and more.  And, why not?  After all, what does it take to bring off such productions?   It only requires the musical IQ and manual dexterity of a concert pianist; the excavation tenacity of a researcher in pursuit of truths; mastery of the playwright’s art; and instinctive and charismatic storytelling.  Fortunately, Felder possesses all of these, as he has revealed in numerous productions and over 6,000 performances.  He even designs stage settings, though that’s not really a necessary skill.

Felder currently plays “Chopin in Paris.”  The great 19th century Romantic composer and pianist may hold special significance to the current imitator, as the living one is also of Polish extraction, though via Canada.  The presentation holds to Felder’s usual high standards and wins praise from audiences.

The conceit of this evening’s entertainment is that it represents a piano lesson taking place on March 4, 1848, with the audience cast as students.  At the outset, Chopin invites anyone from the audience to come to the stage and audition for him.  I wonder if he ever gets any takers.

The interactive element that certainly works every time is several breaks in the program allowing attendees to ask questions.  Needless to say, this procedure creates spontaneity and variability from one performance to another.  To succeed, the maestro must know far more than is presented in the fixed narrative; he must ad lib in response in a witty manner; and he must be able to make deletions and enhancements to the script as dictated by the impromptu exchanges.  Felder accomplishes these requirements with great aplomb and with an apt portrayal.  His appearance and affect are right for the part, and he wisely uses enough accent to be realistic yet not so much as to make him hard to understand.

Chopin was a master of the short form in classical music.  Very different in his output than those who inspired him, he claimed to be most influenced by Bach, whom he said all composers borrowed from, and Mozart, whose music to him was like the sound of God.  Particularly renowned for his rousing polonaises and mazurkas (along with delicate nocturnes and more), Chopin is fittingly noted as being perhaps the first nationalistic composer of serious music, prompting similar inclinations to be followed by Franz Liszt and others.

The excerpts in the program are mostly lively and highly melodic, but there is a bit of sameness in many.  They do however offer a great opportunity for Felder to display his prowess at the keyboard.  His skill is especially well demonstrated in the closing polonaise in which, at times, the complexity of the piano piece and its playing suggest the richness of an orchestra.  He also illustrates the impressionism in Chopin’s composition by playing and explaining small phrases that are suggestive of actions from flirting to grumbling.

We learn of Chopin’s life story, which, for the greater part, is a sad one.  Fortunately, he did succeed at times at composing and teaching.  He performed in concert only 30 times in his life, but was noted in the salons of the intelligentsia and recognized by the more famous Liszt as the greatest pianist alive, quite a tribute from one whom many would have considered deserving of that honor.

Chopin left Poland at age 20, never to return.  His homeland had been carved up by Russia, Prussia, and Austro-Hungary, and he was afraid to return as the Russians, who controlled Warsaw, might not let him leave again.  In a poignant reminder of Russia’s international aggression that resonates today, an uprising by the Polish people shortly before this “class” was taught was ruthlessly suppressed by Russian troops who perpetrated wanton destruction.  Sound familiar?

The composer failed in love, most conspicuously in a conflicted eight-year relationship with author Georges Sand (née Amantine Dupin).  More critically, he was sickly his whole life and died of a heart condition at age 39.  But for theater goers, the telling of the tragedies of that short existence and hearing some of the timeless musical legacy he left behind is a rewarding experience.

A final note - many patrons wish to see a listing of the numbers performed in a theatrical performance with music. Unfortunately, the program does not adhere to the time honored tradition of publishing such a record.

“Chopin in Paris” written by Hershey Felder, with the music of Fyrderyk Chopin, Mozart, and others, is produced by TheatreWorks Silicon Valley, and plays at Mountain View Center for the Performing Arts, 500 Castro St., Mountain View, CA through September 11, 2022.