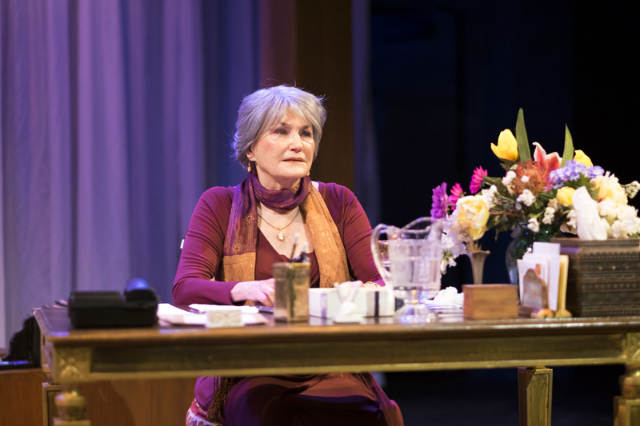 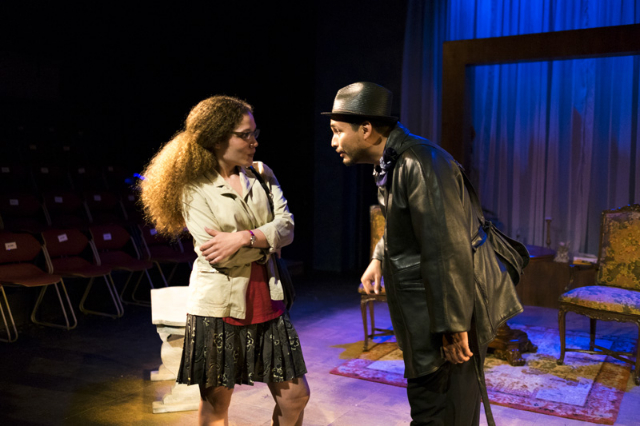 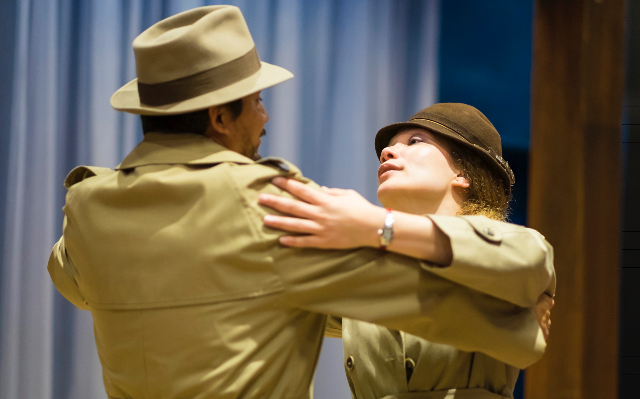 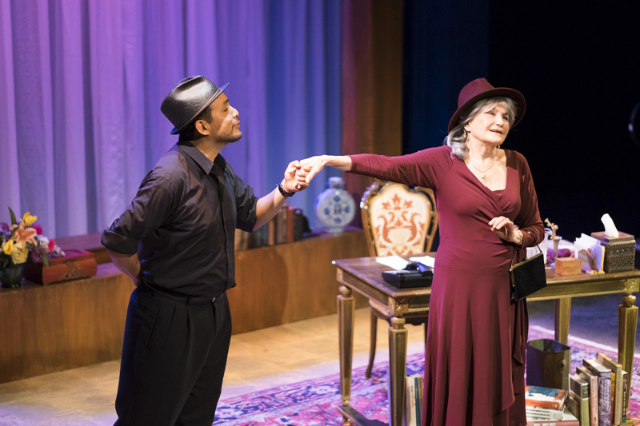 In 1939, the goal of the voyage of the ship, the St. Louis, was to carry its 939 German Jewish refugees to safety in Cuba.  Instead, Cuba turned them away, as did the United States and Canada.  The ship returned to Europe, and an estimated 254 of the passengers  perished in concentration camps.

That tragedy is the underpinning of Sotto Voce, written by the Pulitzer Prize winning playwright Nilo Cruz.  Cruz came to the United States from Cuba with his family in 1970 on a Freedom Flight, so he knows first-hand the desperation of those seeking asylum.

The words sotto voce mean “in a low, soft voice so as not to be overheard.” This concept permeates Sotto Voce.  The play centers on three characters.  Bernadette Kahn, played by a mesmerizing Annette Miller, is an agoraphobic, 80-year-old, German-born novelist living in New York.  Her long ago Jewish lover, Ariel Strauss, perished on the St. Louis with his sister.  Bernadette was to meet them in Cuba.

Saquiel Rafaeli, portrayed by Jaime Carrillo in a sensitive performance, is a 28-year-old Jewish student from Cuba whose great aunt was a passenger on the St. Louis. He is trying to compile a history of those who perished.

Lucila Pulpo, played by Evelyn Howe in a totally naturalistic style, is the young Columbian maid who takes care of the novelist and shields her from the outside world.

Saquiel finds Bernadette in an effort to learn more about those on the St. Louis.  While the two never meet in person, they communicate by phone.  What she resisted initially, Bernadette succumbs to and begins to look forward to her intruder’s calls.  His contact revives her memories, at first painful, and then inspire her to begin writing after a long hiatus.

Nilo Cruz, who won the Pulitizer Prize for Drama in 2003 for Anna in the Tropics, writes poetically, creating dream-like situations that seem to reach to the hearts of these characters, all of them displaced and seeking solace.

There is a certain timeliness of this story, as the director Gidron points out: “The tragedy of the rejection of refugees fleeing persecution and extermination has echoes and reverberations with today’s plight of refugees from Syria, Afghanistan, Iraq and Africa.  When borders close, when presidential candidates vie with one another about building walls…, or deporting million of immigrants, and keeping Muslims out of the country, we realize that unfortunately history can repeat itself.

“Sotto Voce” is a testament to the positive human ability to endure pain and joy, to connect even when separated physically, to love regardless of age and cultural differences.”

Annette Miller is convincingly luminous as Bernadette throughout.  Jaime Carrillo as Saquiel seems like a dream (his name means Angel of Water) through much of his pursuit of Bernadette, poetically describing his desire to revive the memories of those lost on the St. Louis. And Evelyn Howe as Lucilla shows her to be gentle, caring and also fearful of her own immigration status.

Designer John McDermott has created a simple but  functional and creative set that serves the story well. Deborah A. Brothers’ costumes add to the simplicity of the story and the differences in each character.

There is a lot to ponder in this poetic play.  At the end, you realize that the tragedy of the St. Louis happened because the plight of those onboard was sotto voce, too low to be heard; and with each rejection, their voices became fainter and fainter.  We are left to wonder why such tragedies are recurring again today.