Having Our Say- the Delaney Sisters First 100 Years 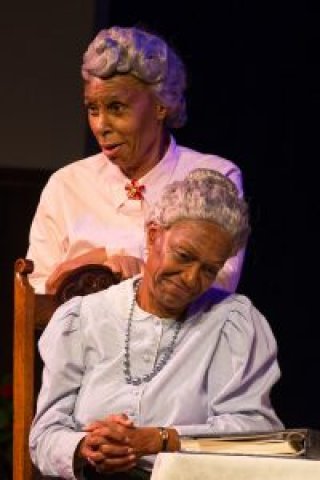 Think about all that happened in the 20th century –two world wars, radio, television, space explorations, airplane travel, penicillin, votes for women, desegregation – and so much more.

The Delaney sisters (Sadie, the older and Bessie, the younger) lived through all of that and more. Having our Say- the Delaney Sisters First 100 Years now at Ivoryton Playhouse through Sunday, Sept. 5 lets us get a unique perspective on these from the two sisters.

The original book was a best-seller in 1993 and in 1995, Emily Mann adapted it into a play and later a television movie.

Sadie and Bessie were born in the segregated South as part of a large family led by their father, a former slave, and their mother. They grew up in Raleigh, North Carolina on the grounds of St. Augustine’s School (now University), where their father was vice principal and their mother matron. As young women, the two sisters moved to Harlem and both broke through many barriers to successful careers.

These two sisters, 103 and 101 at the time of the play, regale us with incidents and observations on their lives and opinions.

And what experiences they are. They talk about their family’s history (and photos are projected) of slavery and freedom. You learn that their father’s master taught him to read, which was against the law, and that another relative had a common-law marriage in Virginia with a white man, also against the law until the Supreme Court overturned the ban on interracial marriages in 1967.

Bessie and Sadie share how, when the Jim Crow laws were introduced, they were upset that they now had to sit in the back of the trolley; they had enjoyed having the wind blow their hair when they sat up front. But they also talk about the lynchings.

These were strong and determined women, who came to New York on their own, got advanced degrees (Sadie a master’s in education from Columbia and Bessie a dentistry degree).

As they recount their lives and incorporate their opinions, we learn about the mundane and the significant. From the special dinner they make each year on the anniversary of their father’s birth and their moves to the Bronx (at the time rather rural) and later to Mount Vernon where they bought a small house, to the death of Dr. Martin Luther King.

At times you may wish they comment more on the events they have observed rather than focus so much on family matters. One of the more compelling moments is Bessie talking about a protest over the silent film Birth of a Nation.  After all, they were in Harlem during the Harlem Renaissance (and knew some of the members of it), the unrest and protests in NYC and the civil rights protests of the 1960s.

Occasionally I felt like I needed a family tree as they talked about brothers and sisters and older relatives.

The two describe themselves as “Christian women” who never married, though each apparently had boyfriends. We don’t hear anything about those.

Both Williams and Harley convey the essential personalities of these two women. These are vital, “with it” women who have no physical or mental limitations except those of advanced age.

I am not sure if the occasional jumbled line or delayed word was part of Williams’ characterization, to signify those “senior moments” but the effect was not only to seem uncomfortable but to slow the pace of the show.

My major concern was the pacing. I have seen the show in the past and it has never been over two and a half hours long. Most productions of the play are about two hours or just a bit over including an intermission. This production has two 10-minute intermissions and each act is between 35 and 45 minutes in length.

I expect that as the show continues to run, the pace will tighten up.

Director Todd Underwood must take responsibility for the deliberate pace of the show. At times it seems there is extraneous activity with props, etc. that slow things down. The set – with a kitchen, living room and dining room – by Martin Marchitto seems absolutely right for these two women.

Late in the play, the two women talk about politics: they are convinced there will be a woman President before an African-American.

You want to fill them in on all that has happened in the 21st century.

This production would be a great one for older children and teenagers. It gives them history but in a very personal and palatable way.