Gladys Knight and The Spinners 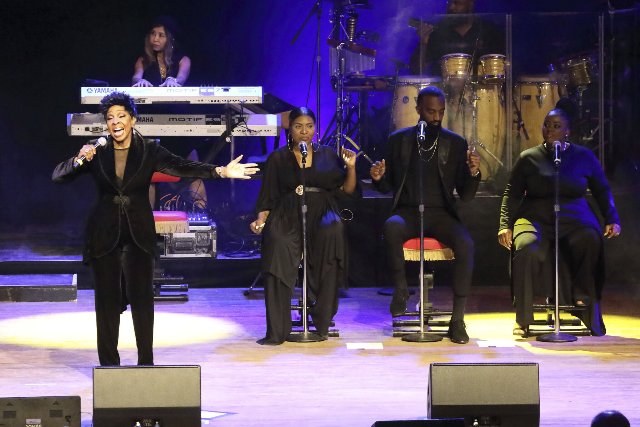 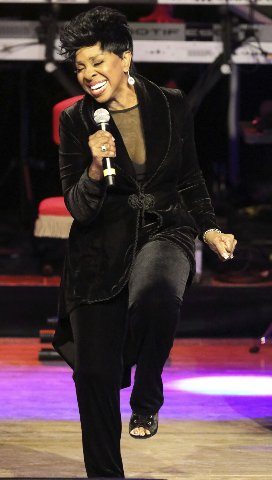 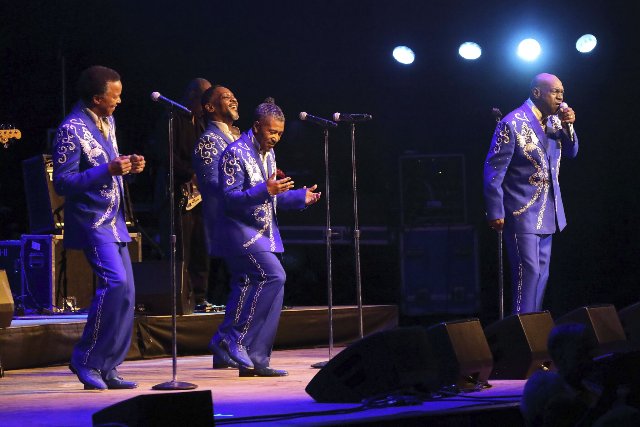 It was a soulful night of nostalgia at Tanglewood. The Spinners went on at 7 and cooked. We needed the heat on a cool wet night. In every sense they warmed up the audience for Gladys Knight. There was a long intermission before she went on at ten of nine and by 10:25 after some 20 songs we made our way home.

The Shed was mostly full but a rainy night dampened attendance on the lawn. It was a primarily senior audience which seemed to recognize and chime in with an evening of oldies. The Spinners formed in 1965. Original members are long gone  but with many substitutions it has become a franchise.

Dressed in matching sequined purple suits the four singers  put their spin on soul music. There were all the classic moves including complex choreography and a dramatic range of voices from bass baritone to falsetto. They mixed their own hits and soul standards. In particular we enjoyed “I’m Crying Over You” “Working My Way Back to You” (Temptations/ Spinners) and “Cupid.”

They informed us about how much fun they were having “in Lenox” and encouraged us to join in the party. It was a knockout performance.

Gladys Maria Knight was born on May 28, 1944. With the Pips they joined Motown Records in 1966. As Knight told us during a performance accented with memories a producer told her that he was going to get them a hit.

He gave them a song to kick around on tour. When they returned it was performed for him. Even though they were just off the road he insisted that they record it. Reporting back to him they said that there was a problem. Somebody was working in Studio A. That person was Smoky Robinson who vacated so they could record “I Heard It on the Grapevine.” With flair she stated "That's a true story."

Properly raised by a family with firm moral values initially Knight was reluctant to record a song about gossip. Her concerns were overcome and the song proved to be the top seller for Motown in 1967. A year later it was a mega hit for Marvin Gaye. She demonstrated the difference in their versions.

Berry Gordy, the founder of Motown, presided over a soul empire. Regarded as primarily a second tier act Gladys Knight and the Pips toured opening for Diana Ross and the Supremes. That ended when Ross felt that Knight was upstaging her with strong audience response. Today Knight is regarded as a soul diva in a list that grows ever shorter.

Much of her performance comprises a retrospective interspersed with memories and anecdotes. A modest and devout woman there were references to our mortality and making the most of the gift of life. For those of us in our seventies there was an emotionally resonant sense of legacy. There was a stunning rendering of “Natural Woman” a tribute to Aretha Franklin. It featured a backup singer with Knight and the other two singers, a man and woman, joining it. Graciously they also had their solo moments.

Some years ago I saw her with The Pips. This performance felt totally different. Here she was a solo artist backed by a tight and grooving six piece band and three singers. It was interesting that she featured two women as the Pips were all male.

Going solo, however, entailed exposure and vulnerability. Early on she was tentative and self deprecating. She thanked the audience for being loyal to her for decades. That meant digging into a vast range of material much of it early and unfamiliar. She mentioned that a couple of times and from time to time relied on the band to cue her and get back on track.

She spoke about wanting to communicate with audiences but is a luddite when it comes to social media. It seems her sister, a brilliant woman with a ton of degrees, thought that Gladys was mad at her. She was not answering messages. What messages was the question. There she needed help from her band/ family. It entailed texting. When her sister explained it to her pressing the button "nothing happened." Looking out at the audience she wondered if some of us have the same problems. It was the familiar new tricks conundrum. But it highlighted a generational divide which she commented on in a variety of ways.

There was a confusing discussion about love; how to show and get that from an audience. Some of which entails just being on stage and expecting it. She conveyed misgivings about the usual tricks of the trade and its contrived expectations. Like young acts that start with asking the audience to put their hands together. "I hate that" she said. "They haven't even done nothing yet" and are demanding applause. She often spoke of “the music industry.” It implied behind the scenes tensions that were unfamiliar to the audience.

As the long set progressed down a winding road of memories she found her footing and rapport with the audience. Her vulnerability made the emotional connection all the more engaging and credible. It proved to be a stunning and insightful performance.

While never quite on the A list of soul sisters Knight has notable accomplishments. She recorded two number-one Billboard Hot 100 singles ("Midnight Train to Georgia" and "That's What Friends Are For"), eleven number-one R&B singles, and six number-one R&B albums. She has won seven Grammy Awards (four as a solo artist and three with the Pips) and is an inductee into the Rock and Roll Hall of Fame along with The Pips. She recorded the theme song for the 1989 James Bond film Licence to Kill. Knight is also listed as one of Rolling Stone magazine's 100 Greatest Singers of All Time.

The set list touched on all phases of a career that stretches back to the 1960s. Most remarkably she had great power and vocal range. That was evident sustained through a long set that would challenge any performer.

Starting at 8:50 pm she sang about keep on keeping on and making the most of a bad situation. Through the ups and downs of personal and professional challenges. It was followed by “Love Overboard” a 1988 Grammy winner.

Often anecdotes introduced songs. She spoke of respect and friendship with a genius Curtis Mayfield. They had just finished a tour and were home in Detroit when he called. He wanted to record with them ASAP. The next day they drove to Chicago and spent the weekend in the studio.

That resulted in Claudine  written and produced by Mayfield. It was the soundtrack album for the 1974, 20th Century Fox motion picture Claudine, starring James Earl Jones and Diahann Carroll. From that project she sang a couple of songs including “Make Your’s a Happy Home.”

Her cover of Sam Smith’s “Stay with Me” explored love, separation and longing. There were many shifts of mood. She was accompanied by acoustic guitar in the ballad “I Hope You Dance.” The lyrics particularly resonated with looking back on a life lived.

“I hope you never lose your sense of wonder
You get your fill to eat
But always keep that hunger
May you never take one single breath for granted
God forbid love ever leave you empty handed
I hope you still feel small
When you stand by the ocean
Whenever one door closes, I hope one more opens
Promise me you'll give faith a fighting chance…”

She reflected on the loss of mentors and giants including jazz artists/friends Ella Fitzgerald, Sarah Vaughan,  and Nina Simone. She recalled almost falling off the stage when she spotted Ella in the audience.

With percussion providing a samba beat she offered “The Man I Love” as a tribute to Ella. That was followed by a Lena Horne standard “Stormy Weather.” In an evening of soul it was stunning to have jazz as a change of pace.

After solos and duets with the backing singers she focused on hits. From 1975 with the Pips she performed “The Way We Were/ Try to Remember.”

It was 10:15 when she sang “Neither One of Us (Wants to Be the First to Say Goodbye)”. With emphasis on “Goodbye” it seemed like the end of the set. She kicked into an extended version of the Grammy-winning "Midnight Train to Georgia" (#1 on the pop and R&B chart) from 1973. By then love flowed freely from both sides of the stage.