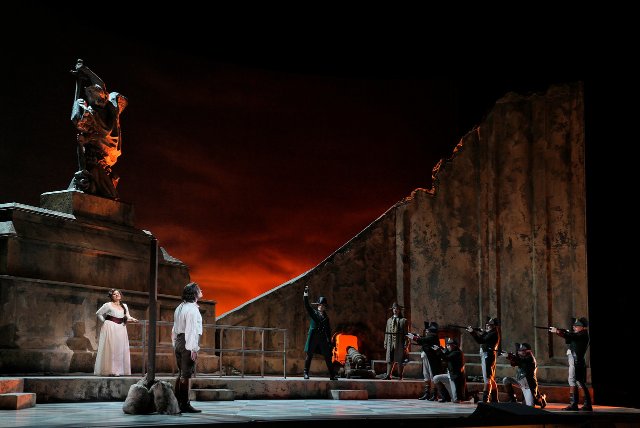 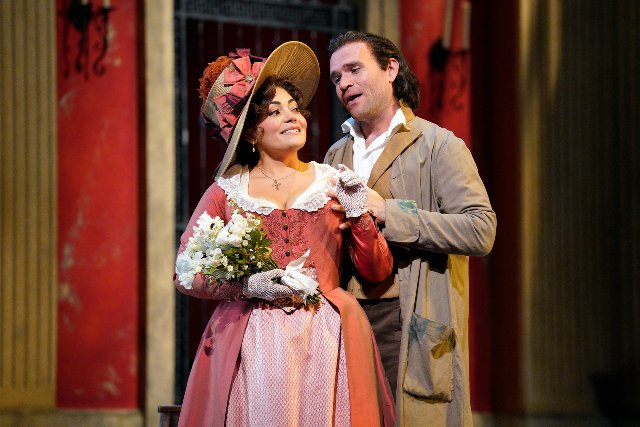 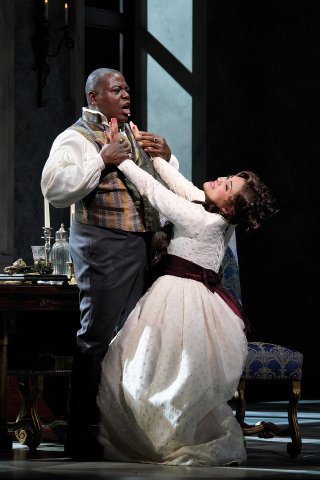 Has any other opera been so strongly associated with the birth and rebirth of a grand opera house and its resident company?  From its inception by founder Gaetano Merola, San Francisco Opera has had a love affair with the works of Giacomo Puccini.  To debut the opening of the War Memorial Opera House in 1932; to reopen in 1997 after the renovation necessitated by the Loma Prieta earthquake; and to mark its return to audiences in 2021 after the pandemic hiatus, the company has turned to the same Puccini masterpiece, the dark and glorious “Tosca.”

The audience was enthralled just to be back in the opera house, appreciative that the company and government authorities found protocols to permit the return to live performance.  Although no social distancing requirements applied, the audience was fully vaccinated and fully masked, substantially eliminating the risk of Covid-19 transmission.

As expected, the company offers a strong rendering of this classic, albeit, as a remount of its stellar 2018 production. Per the composer’s intent, it takes place in Rome during the Napoleanic Era, lavishly staged with independent sets for each of the three acts.  Though impressive, the visuals offer nothing new to SFO regulars.  But the artists are new, and this season opener marks the conducting debut of Eun Sun Kim in her role as Music Director of San Francisco Opera.

What is it about “Tosca” that endows it with near universal appeal?  There have been naysayers who find the action and music of verismo to be too violent and vulgar, but they are now few.  To begin with, this is a mature and confident Puccini in the follow up to his equally renowned “La Boheme.”  The opera’s dissonant, ominous opening salvo of the Scarpia theme announces the tragedy to come, while the ensuing score resounds with rich melody, haunting leitmotifs, and several memorable “greatest hits” arias.

To complement the music, “Tosca” possesses intense drama anchored, nay, dominated by three archetypal characters.  Ailyn Peréz plays the title role of Floria Tosca, a great singer who lives for art and love.  This character offers unusually broad scope for interpretation, and Peréz uses her natural youth and charm to make Tosca delightfully coquettish, inducing uncommon and welcomed levity into Act 1.  Michael Fabiano plays her lover, the courageous hero Mario Cavaradossi, a painter in a church, surreptitiously involved in a political movement revolting against Rome’s current government.  Finally, the antagonist is Scarpia, whose very name resonates with evil.  As Chief of Police, his pursuit of enemies of the state comes with the territory, but his methods are foul.  For one, he looks to gain sexual favors from Tosca in return for releasing Cavaradossi from arrest and probable execution.  Alfred Walker’s facility for an ambiguous countenance allows him to depict Scarpia’s unctuous allure as well as his callousness and depravity.

Conductor Kim exacts full measure from the 68-piece orchestra, which fills the house with rich sound. Although the overall production satisfies extremely, the one weakness is that the principals do not always compete well with the orchestra.  That is not the case with Fabiano, who is always clearly audible and even overpowers with controlled anguish when called upon.  His nicely-tuned vibrato shows well in the beautiful Act 1 love letter to Tosca and Mary Magdalena, “Recondita armonia.”  At the end, he brings the house down with his mournful rendition of the fabulous “E lucevan le stelle,” as he contemplates death by firing squad.  This beloved aria’s distinctive quality comes in part from the lead-in melody being carried by an evocative oboe, while the tenor provides counter support until given his turn.

Peréz possesses a beautifully lyric voice that sometimes gets lost at lower volumes.  Conversely, when singing forte, her voice turns dramatic and penetrates with ease.  Happily, she conquers her signature aria “Vissi d’arte” to a quieted house in Act 2, tenderly and with great confidence as she pleads with Scarpia to free her from the misery that he has caused.  She and Fabiano deliver both power and beauty in their final duet.  Noteworthy is that while Puccini included rare full or partial duets, he avoided the artifice of large ensemble numbers in this opera.

Scarpia’s most significant vocal moment is shared with the chorus in the booming Act 1 conclusion, “Te Deum (Tosca)” with his expressive repetition of the heroine’s name against the chorus’s religious praise to God.  Walker’s tonality is pleasant, but more commanding power would deliver the plaintive emotion of the piece better.  Otherwise, he does demonstrate his character’s dominance and rage quite well.