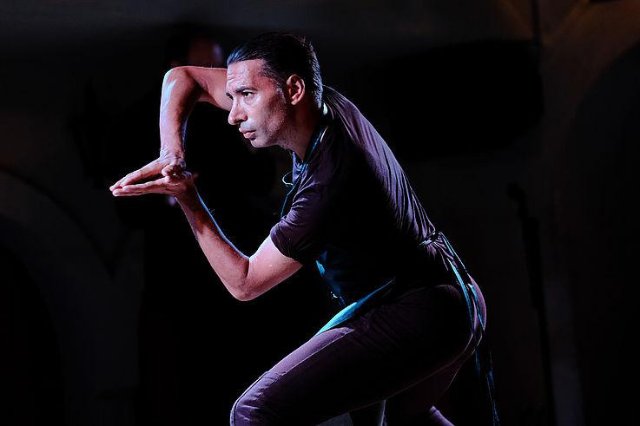 The 34th edition of the International Dance Festival in Berlin has drawn to a close. From August 5th-27th, 2022, Hebbel am Ufer (HAU) showcased in 10 locations throughout Berlin and with 21 productions what is good, new, and exciting in contemporary dance worldwide.

Virve Sutinen, Artistic Director of the Festival since 2014, has selected in her last season at the helm of Tanz im August an amazing array of dancers, choreographers and performers from 25 countries. This year's focus was on the Swedish-Italian choreographer Cristina Caprioli and her Stockholm based organization ccap. For over 20 years Caprioli has combined dancing with films and interactive actions among the audience. Throughout the festival her retrospective Once Over Time is shown in several venues. It showcases 22 danced works that familiarize the public with her philosophy and her interactive style -  quite an undertaking! She even performs herself at the Sophiensaele with Loops: Scary Solo.

This solo represents one of the few purely danced works of the festival.  The choreographer Adam Lindner, originally from Sydney, Australia, was also able to integrate classical and contemporary dance beautifully with his five dancers in Loyalty. Equally convincing was US choreographer Trajal Harrell with his The Koeln Concert, danced by six performers from the Schauspielhaus Zuerich Dance Ensemble at the HAU1. The internationally renowned Harrell and his group has  brought  this year's  edition of Tanz im August to a dancing and singing finale.

Already, the opening show Straight Talk/Jurrungu Ngan-ga by the Australian dance company Marrugeku at the Haus of the Berliner Festspiele impressed with the high intensity of movements but became a bit tiresome due to the long talks accusing the legal system of imprisoning the indigenous population without cause and treating them cruelly.  Social criticism and dancing are also very prominently intertwined in Oona Doherty's ensemble work Navy Blue. The Belfast choreographer is a shooting star in the international contemporary dance world. Clad in worker's blue, the movements of her ensemble reflected fear, hopelessness and accusations against mankind at large, a bit of a massive accusation.

But, not all was visually bleak. Political statements can be represented in a more intriguing way:

This was shown by the work of the South African choreographer Robyn Orlin, We Wear our Wheels With Pride and Slap your Streets With Color...We Said bonjour to Satan in 1820. Despite the endless title it is a colorful, enjoyably danced happening on stage, that still drove home the horrors of Colonialism when it ends „in memory of the Riksha drivers who never lived beyond 35 years.“

The Columbian choreographer Martha Hincapié moved her focus to the future of the indigenous Quimbaya in the rainforest of the Amazon region with her work Amazonia 2040. It was more of a lecture with public participation at the HAU1. Even though everybody was able to put hands into individual sacks with soil, it all felt too „staged.“

Not too large and extremely focused was the Flamenco performance by Israel Galván and his singing partner Nino de Elche at the Haus der Berliner Festspiele. It was an amazing tour de force for both, enthusiastically and rightfully applauded by the audience.

There are many more aspects to the festival.  Again, there were lectures, get togethers, after performance talks,  and a specific library at the festival center.  The 34th edition of Tanz im August produced a visual tour through the global world of contemporary performances.  Dance and performances seemed to be part of the entire offerings but on equal footing with music, lectures and videos. Perhaps this will be pointing to the future, a future where dance is just part of a gesamtkunstwerk of informative projections. This first post-corona festival allowed again,  a physical exchange of cultural messages. A big thank you to Sutinen and Hebbel am Ufer.