O’Neill Play Washes Up in Stockbridge 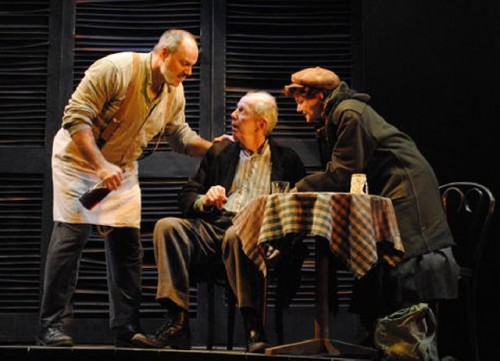 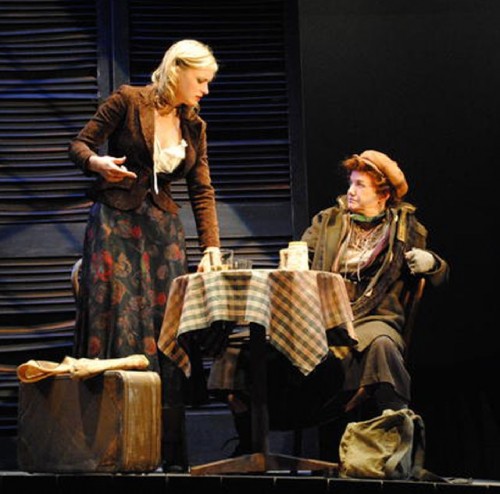 Anna (Rebecca Brooksher) and Marthy are women of the world. 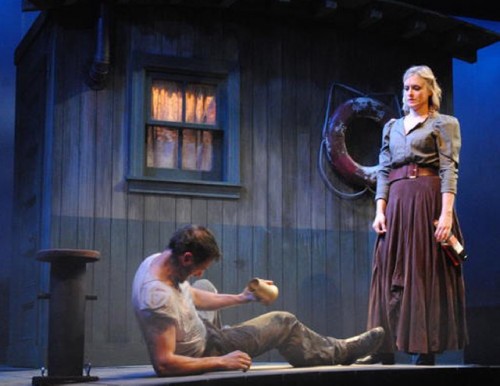 Mat (Derek Wilson) has washed up from the sea. 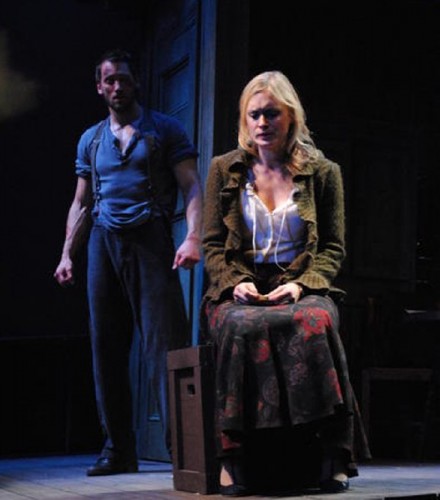 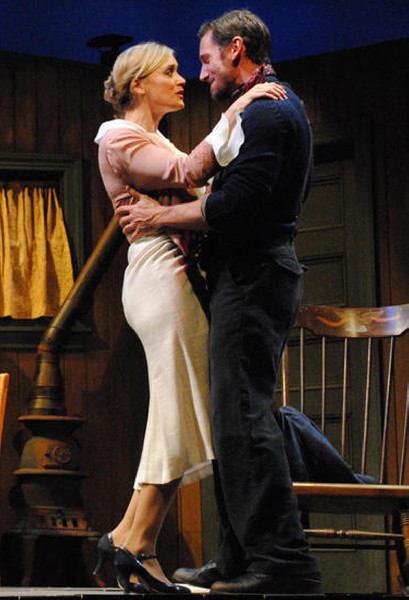 An evening of O’Neill (1888-1953), the greatest American playwright of his generation, can be a long slog. The director, Pulitzer prize winner, David Auburn, has reduced the play from four to two acts trimming the cast from ten to five actors. While this shorter and more intense production may better appeal to the attention span of contemporary audiences much of the nuance has been excised leaving little room for imagination.

While it is a gift to experience a rarely mounted, renowned work by a great playwright we are not sure we actually have.

Auburn by taking a streamlined, credible and realistic, understated approach has served the steak without its sizzle. While the plot points are advanced with clarity they lack flavor.

There’s lots of that as the booze flows like Niagara Falls mirroring the lifestyle and addictions of its playwright. If there is one thing that O’Neill understands it’s writing characters who seek truth at the bottom of a bottle. Given his heritage we remind you that alcoholism is known as Irish suicide.

The first act, reduced to a scene, is staged in a waterfront barroom in this production absent its owner Johnny the Priest, two longshoremen, and the postman who delivers a crucial letter from Anna Christie (Rebecca Brooksher).

Larry the bartender, played with mannered apathy by Walton Wilson, pours endless drinks for Chris C. Christopherson (Jonathan Hogan) - captain of the coal barge Simeon Winthrop. With a thick, often obfuscating Swedish accent we learn that he was formerly a bosun, or noncom  officer of sailing vessels. He prides himself in knowledge of seamanship while constantly uttering deeply rooted fears of the old devil sea.

Chris has enough cash to pay for his drinks as well as those of a live in companion Marthy Owen (Alison Fraser). They are less like lovers than sea creatures tossed up by the waves until the tide washes them apart.

The fateful letter briefly announces that after some 15 years his daughter, who he last saw as a five-year-old in Sweden, is coming from St. Paul to visit. With no resistance Marthy announces that she will ship out to make room in the cabin.

Given all the booze he has consumed Chris is advised to go eat to be sobered up for the anticipated arrival of his daughter. Entering in travel clothing and lugging a suitcase Anna needs a drink, or two, or three. Like father like daughter. Not knowing who she is Larry responds to her as just another tart. Joining Marthy to hoist a few she is outed and cops to being a hooker just released from the slammer and a stint in its hospital. She is tracking down her father in hopes of a period of recovery.

This is where it gets complicated. Marthy ships out and Chris, who has exchanged the occasional letter over the years, knows nothing of her horrific history. He deludes himself into thinking that the wife he abandoned for the sea moved to bucolic Minnesota. When she died the child was raised with relatives on a farm.

His Anna is a nice farm girl or so it seems. We learn that Anna was an indentured servant probably raped by a cousin. She left for St. Paul first working as a nurse. Then hating that she was reduced to selling her body

The original version of the play focused on the father but after an extensive rewrite O’Neill shifted to her story. The challenging role requires her to convey several subtle changes from her hard scrabble sordid past, to regeneration through the salt air of life on the barge, then love for a shipwrecked stoker Mat Burke (Derek Wilson). He was dredged from the ocean to be rescued on the barge.

While other critics have praised her performance I found Brooksher’s transitions flat with difficulty defining its edges. The play hinges on the dramatic device of reversal. Add to that the paradigm shift of character and its fatal flaws. When these elements are handled smoothly the resultant drama can be compelling. Here, under the subdued direction of Auburn, I never believed or trusted the dramatic evolution of the characters. The focal point of Anna was particularly creaky. She is written as the fulcrum between Chris and Mat who love her and hate each other.

The tension between her Swedish father and Irish lover culminates when Chris pulls a knife on Mat. The father wants to protect his daughter from a marriage to a long absent sailor. He doesn’t want to see Anna abandoned in marriage as he did to his wife.  Mat is not worthy of her. Which, given her past, is beyond ironic.

While Anna hates the men who have used and abused her she is now deeply conflicted with emerging love for her reunited father and a passion for the ardent sailor who wants to wed her.

That prospect forces her to reveal her past. She will not marry Mat based on lies and deceptions. The denouement shocks and saddens her father. Ironically father and lover sign on to the same ship bound for Cape Town and Anna has a ticket back to the mean streets of Manhattan.

The most interesting passage of the play, now less shocking than in the 1920s, is a face-off between Anna and Mat. He denounces her as a whore and even threatens to kill her for deceiving him. Brilliantly, she counters that, like her Johns, he is no better. What about those women in every port who he seduced with a pack of lies? He didn’t love the women any more than she did her tricks. Nice.

The morning after a night like that in Stockbridge I need a bit of the hair of the dog.