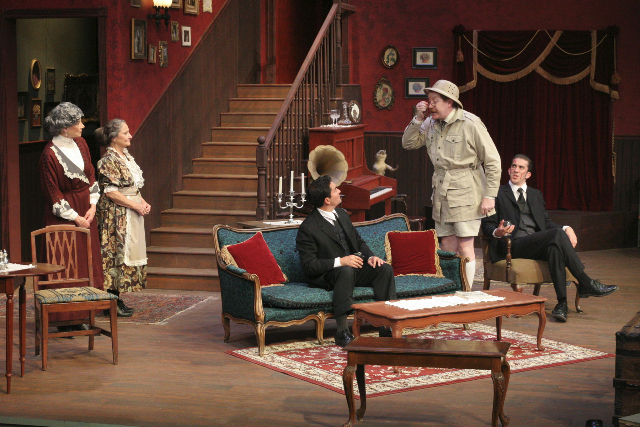 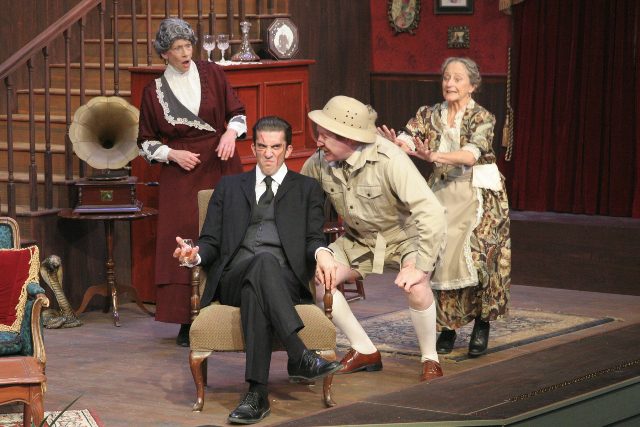 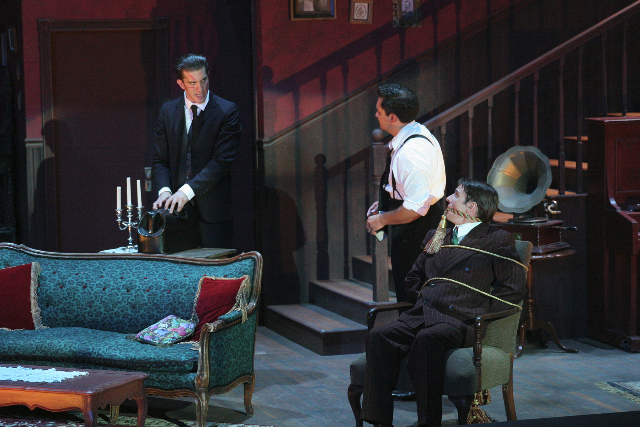 "O, wine!, the truth-serum so potent that all those who wish to live happy lives should abstain from drinking it entirely!" Roman Payne.

The genre distinction of black comedy is that it treats disturbing subjects with a humorous twist.  Often, the depictions or intimations are so graphic (e.g., Sweeney Todd, the Demon Barber of Fleet Street) or the subject matter is so portentous (e.g., Dr Strangelove, or How I Learned to Stop Worrying and Love the Bomb) that a viewer's laughs may be tinged with anxiety.  This is less the case with Arsenic and Old Lace, which is written with such deft touch that the murdering of lonely old men seems almost benign.

Broadway lore suggests that Joseph Kesselring set out to write a drama based on real-life events but upon completing it was convinced by his producers that the material would translate well to comedy.  The premise of the narrative is that two otherwise caring and harmless spinster sisters have taken to inducing rootless older men into their home and doing them in by means of elderberry wine laced with a cocktail of poisons.  They are abetted by their even more delusional live-in nephew who thinks he's Teddy Roosevelt.  When told that the victims have died from yellow fever while building the Panama Canal, Teddy gleefully buries them in his Panama Canal - the basement.

The sisters' "good" nephew, Mortimer (a theater critic, no less!) unwittingly insinuates himself into these macabre proceedings.  So does the "bad" nephew, Jonathan, who surprisingly shows up after a 20 year absence which has included penitentiary stints and face alterations.  As a parade of characters from cops to girlfriend pass through the house, Mortimer goes frantically into conceal mode; Jonathan maneuvers to take advantage of the family secret; and complications ensue.

The play is a classic and was very highly regarded during its Broadway run. This production faithfully follows the script, and in director Dale Albright's realization, lines are well delivered and produce the desired laugh responses.  The physical and visual comedy is less consistent but often very successful.  As the sisters, Mary Bishop and Micaela Greeley lead the acting corps.  Their timing is exquisite and their naive delivery is highly effective.  Most of the remaining acting is fair to good, depending partly on the viewer's tolerance for over-the-top style.  In all, after a slow orientation, the show moves along briskly and entertains.

Fine creative resources are brought to bear.  Andrea Bechert's  thoughtful stage design enhances the production.  The three acts require only one set, but it reflects the period well with fine layout and detail.  The several egresses, which are important to look and function, operate well.  Teddy repeatedly charges up the stairs brandishing a long wooden spoon as if leading the assault on San Juan Hill in the Spanish-American War.  At one point, the open door to the basement cleverly reveals a moving silhouette on the wall of a man shoveling dirt for a grave.

The play is set in 1941 and to an extent is time-bound.  Older patrons and history buffs might better understand some references to Judith Anderson, 'Hellzapoppin', and Teddy Roosevelt's life.  More so, a running gag in the script suggests that the menacing Jonathan looks a lot like Boris Karloff.  The original Broadway production had a distinct advantage on this point as Karloff was cast as Jonathan.

Arsenic and Old Lace by Joseph Kesselring is produced by Douglas Morrisson Theatre and plays at their stage at 22311 North Third Street, Hayward, CA through September 17, 2017.