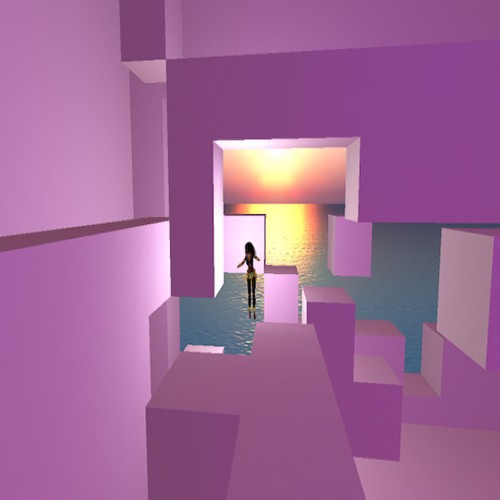 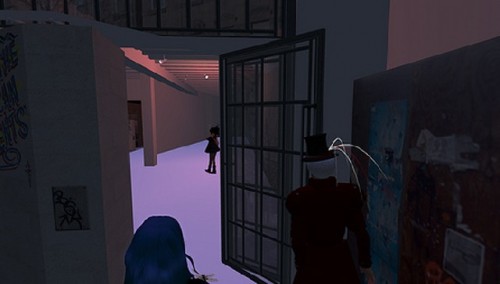 Final Fives Show at the Virtual Gallery East of Oddesy 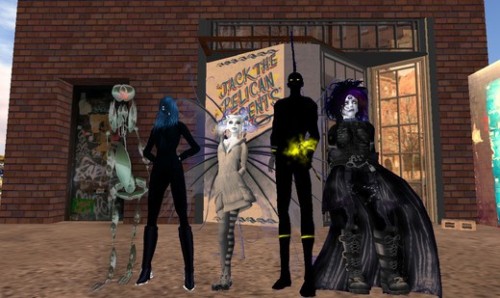 The Final Five. The Artists Avatars in front of a virtual Jack Pelican Presents 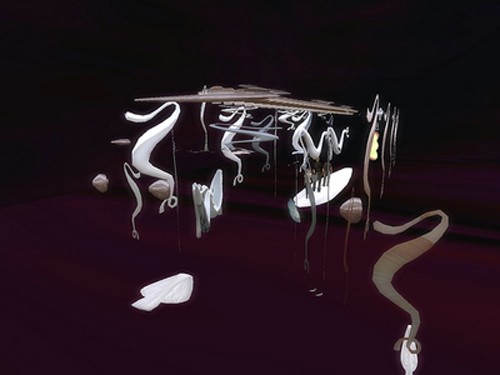 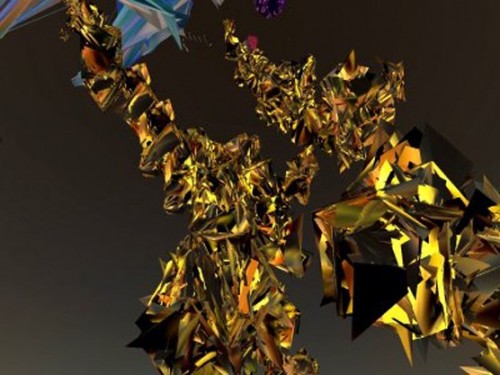 Many facets are explored in the Final Five Exhibition, which was on view this summer at Jack the Pelican Presents Gallery in Williamsburg, Brooklyn.  The exhibition  raised questions and problems. Is virtual art for real? What is the nature of the medium? How should you talk about it? And what are its intended conceptual and social opportunities and limits?

The virtual art exhibit challenges the traditional roles of curator and artist and the way they utilize the gallery space.  It also affects the way we view art.  The success of the project remains to be seen if its ideas are explored  beyond this show.

The gallery was set up with five monitors that displayed a virtual replica of the physical space; each monitor containing a different virtual artwork. The final five artists: Nebulosus Severine, Dan Coyote Antonelli, Selavy Oh, Bryn Oh, and Glyph Graves, created these visions as the result of being nominated and elected among hundreds of virtual artists who exhibited in the first year of Brooklyn is Watching. The mixed-reality project twas envisioned by artist Jay van Buren.

The setting for this virtual stage is the popular online mixed-reality game called Second Life. Artists are able to create virtual artworks to be exhibited in the virtual environment and seen by anyone who comes across the virtual gallery, as well as, viewed at  Jack the Pelican Gallery, uniquely blending and blurring the boundaries for viewing art.

Each of the five finalists shown in the gallery developed conceptual ideas and virtual pieces that interact with the virtual world they were created for. Nebulosus Severine envelops the virtual gallery in a luminous fortress of solitude, presenting mediation on the nature of self. DanCoyote Antonelli uses building blocks of the illusory space as raw material to create an abstract sculpture that stretches sky high. His work brought to mind the earthworks of Robert Smithson and Andrew Rogers, who used real earth material to create interactive and monumental sculptures. Selavy Oh, playing with the endless possibilities of virtual databasing, creates an interactive maze of galleries nested within galleries. These galleries contain works by artists who didn't make the judges selection.

Bryn Oh turns the virtual gallery into a glowing ruin where digital flora grows. Glyph Graves' work changes based on the number of people who view it, allowing constantly changing possibilities and viewings.

Virtual art has come into formation through the endless possibilies existing within our society. Technology has become such a vital and necessary part of our functioning that it's impossible for anyone growing up in these times, to envision a time when technology didn't exist.

Today's generation is experiencing a fusion between what is physical and what isn't, and we are learning to harness the possibilities of this combination. The Internet, for many of us, has become second nature, or a "second life." This blurring is both beneficial and challenging. Virtual art lets artists explore mediums, or create conceptual blueprints for compositions that wouldn't and couldn't exist in a physical sense. But can the message or the function of this medium be considered a real form of art? Does it have the ability and the power of expression in most physical works? And most importantly will it catch on?

First and foremost the most obvious benefits for a virtual art community is the ability to connect and contribute to a near infinite realm of possibilities and space. Unlike physical artwork, a viewer doesn't have to travel to view the virtual exhibitions.

Second Life is abundant with art shows, artwork and artists. Some artists create physical work as well as virtual while others are artists only in the virtual realm. Because this program is popular and used by hundreds of thousands of people worldwide, it creates possibilities for exposure previously impossible for many artists and professionals.

Artists can have a lucrative career exclusively through the sale and exhibition of work, the creation of galleries and spaces, all upon the virtual stage. Creating juxtaposition between reality and virtual reality is an important progression for a Post-Modern society. The ability to exist and network between these two environments will affect how society deals with issues like over population, loss of space and the environment.

If we can  figure out a way to achieve a harmonious balance then I believe that these artists, curators and the Jack Pelican Gallery is on to something far larger than life: both virtual and physical.